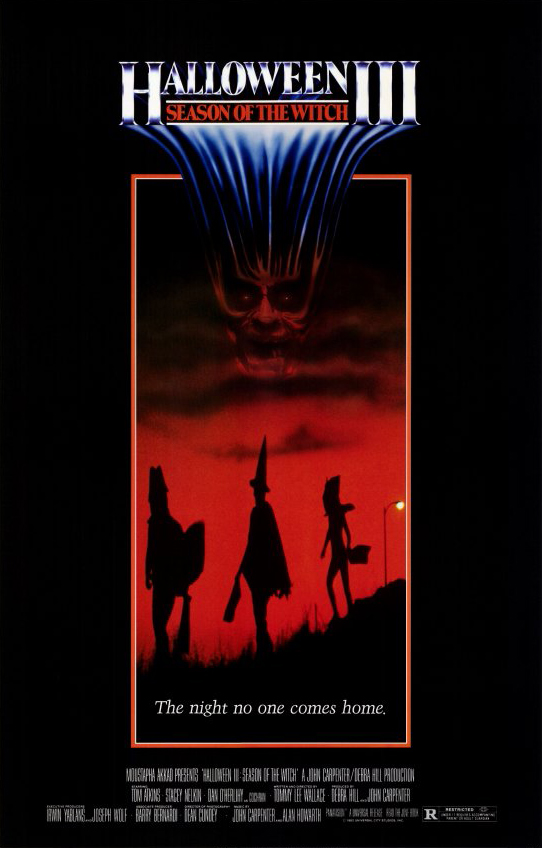 This review is of the edited TV-14 version of the film. All thoughts below should be addressed as such as a review of the unedited version would be more negative
Halloween certainly took a different approach with this installment. No Myers this time and well it’s just nothing like the rest. It does manage to capture a tense atmosphere and you almost have a bit of a Twilight Zone kind of feel here but the film is very quickly not content for the slow burner approach and keeps on going back to being a normal slasher and wasting this tense feeling.

The movie starts with a guy getting attacked and barely managing to make it to the hospital. He tries to warn the staff that everybody is going to die but they quickly subdue him and get the guy into emergency care. Unfortunately the hospital was not quite protected well enough and he is murdered by one of the assailants. Doctor Daniel is disturbed by this so he heads out to get drunk out of his mind. That’s when the victim’s daughter Ellie shows up and declares that she is going to find out what happened. Her father shouldn’t have had any enemies so why would he be taken out like this? Daniel decides to help her out so the two travel to a nearly abandoned town with a mask making company that is their only lead. Have they just stumbled onto something bigger than themselves?

Okay so right off the bat the first scenes have one of the most vicious deaths in the movie as the guy’s head gets completely crushed. This movie really didn’t hold back on just how brutal the deaths were. It’s quite creative in a way as these may be even more devastating than the average slasher film murders. Each and every death here is like that as one person even takes an energy beam to the face and this isn’t Dragon Ball Z so lets just say that it leaves a lot of damage.

The film’s already dooming itself quite a bit with all the violence but even beyond that none of the characters are likable. Lets take Buddy first. He’s already having a lot of family issues because he is not reliable and always missing important days. Well, he’s about to miss a lot of others because he doesn’t even tell them that he’s trying to solve the murder of this latest victim.

Now, this is a pretty serious moment for Ellie and Buddy since murder is no joke. Yet 5 minutes after they get to the hotel they decide to mess around with each other. Okay….it’s probably not the best time to start an affair particularly as they are in enemy territory and believe there was some foul play. All they’re doing is making sure they are extra defenseless now.

Bobby also splits up with Ellie quite a bit considering how dangerous the situation is. Shouldn’t they at least stay together when walking around the town? Buddy just ends up being annoying the whole time and keep in mind that he is also flirting with a coworker the entire time even while he’s having an affair with Ellie. Just keep that in mind. This guy cannot keep his mind on the task at hand.

Then Ellie is just really not smart and handles everything in the worst way possible. She makes it obvious that the heroes suspect the villains like when she runs towards her father’s car or when she nearly bursts into tears after that. She’s super willing to go on the tour and everything to find the evidence but doesn’t really take any precautions. Now there’s probably not a whole lot they could do against the androids but I’d like to at least have seen her head be in the game.

The only person you’ll probably feel bad for here s Marge who just showed up to get some more masks. It’s tough having to go all the way to the factory direct but she did it because she needs those masks in time for Halloween and won’t miss out on the sales. It’s really a case of her being in the wrong place at the wrong time with the wrong product.

Same with Buddy who really did a great job in selling as many masks as possible. Apparently there was nobody better at this which just makes the whole thing even more tragic. He seemed like a good guy too so you just feel bad for him. He probably should have taken down the snakes as they appeared so they didn’t build up but it was a high pressure situation and unfortunately he just wasn’t ready for it. Then you have Cochran who is the main villain here.

The guy is one of those team corporate members who just enjoys a good joke and reliving the old traditions. He has an origin story that explains the supernatural part of the story but it seems like his motivation was really just to play a joke on the whole world by selling these masks that melt into you and summon a bunch of insects. The fact that it only works when watching a commercial is fairly meta.

You won’t be remembering this villain very well after the movie but the one thing you can say for him is that he does have a lot of patience. He had to really build up the company to get it to this point and couldn’t make any slip ups in the meantime. Additionally the Halloween jingle for the commercials is rather catchy. I can definitely picture the characters getting tired of it when it plays numerously every day leading up to Halloween though.

The film ends in a way where you can decide how it plays out. Personally I think there’s no way the company is able to help Daniel out a third time. As it is, I was surprised they even listened on the first two attempts because with the commercials selling so well on the other days they probably wouldn’t dare shut it down. They don’t want to say goodbye to those $$$ after all. It works as a solid ending though and again goes for that Twilight Zone feeling where nothing is at it seems. A sequel would have been interesting assuming that the snakes keep spawning as we see what the government would want to do here.

The climax gives us some action but it was really convenient that throwing the emblems was able to perfectly link the TVs in a circle to burn everyone away and turn someone into a ghost. That was very convenient to be sure. The villain has a bunch of androids with him which explains how they were able to literally rip people apart. I don’t see how Daniel was able to defeat one of them though. It shouldn’t have broken down that quickly or been slow enough to be tagged like that. I had a hard time believing those bits because they just didn’t seem very likely. Low key it was kind of funny to see Daniel take out a napkin to clean his hand while Cochran was monologuing only for him to realize that the substance was too thick to actually be removed that way and he just tossed the napkin.

So I don’t have many good things to say about the film but the one thing I will give it is that the atmosphere was handled well. The scenes where they first drive into the village and we see how oddly everyone was acting is quite solid. You know that something isn’t right and the people here just don’t seem normal. It’s that 80s vibe that is really hard to recreate nowadays. So at least that’s something. Also, having the original Halloween exist in this continuity as a fictional movie is rather meta.

The climax was also decent in some respects. I like that we got several fake outs with the final robot that kept choking Daniel. It made for a decent back and forth fight even if once again I feel like Daniel should have been taken down. If a robot is strong enough to utterly crush someone’s skull with ease then it’s definitely strong enough to choke someone out way before they have time to push you off or grab some loose object on the ground.

Overall, Halloween took some risks but ultimately they did not pay off. It keeps all of the usual slasher elements like particularly gruesome deaths and then doubled down by making the main characters not be all that likable. The spooky atmosphere would have been more effective in a subtle movie where the violence isn’t so high and the tension slowly builds up. I dare say that this film would have been better off falling back on its usual formula if anything because this one just didn’t work. Definitely skip on checking this one out.