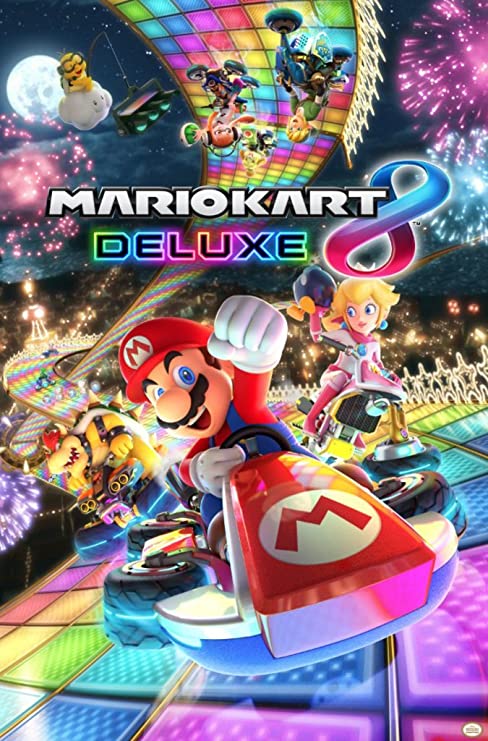 Mario Kart 8 is a game I’ve been meaning to get for many, many years but it just didn’t work out. Well, that paid off in a way because then it came out for the Switch so I got to get the updated version there. The Deluxe version brings Link and everything unlocked from the jump. Throw in the smooth online and it really does feel like a Deluxe edition here. You are bound to have a lot of fun while playing through this one.

Now on one hand with everything unlocked from the jump you may feel less incentive to go and actually play through all of the cups but it also means that you can really relax and do everything at your own pace. You can play the tournaments, jump into online battles, play vs mode, etc. There is absolutely a lot of content here so you certainly won’t run out or get bored either. The amount of stages here must be a record. I’m not sure if that is a fact but at least it feels like this must be the case.

I’ve played a whole lot of stages and I’m not sure if I’ve played them all yet. Then there’s also the character roster which is just as impressive. I set a challenge for myself to play as every character before doing that review and so I took them all for a spin. It’s really cool to play as a guest star like Link here. I can definitely understand why people are getting hyped for a Nintendo Kart. You can’t go wrong with guest stars and it just enhances the amount of fun you can have. Characters are mainly cosmetic as well so you might as well throw them in.

It goes without saying that the gameplay is quite excellent here. The controls are really smooth and you shouldn’t have a problem driving around. I notice that the game does try to make it a little easier on you here as it’s hard to drive off the road. The game will usually auto correct for you to make sure that you stay on the road. That’s definitely a very useful feature to be sure. I don’t think it is quite as good as say Double Dash where you really have to be careful to master your vehicle at all times but it does make sense in terms of making the game more inclusive for everyone to have a good time with. Double Dash is still my all time favorite game after all but it’s safe to say that Mario Kart 8 is the next best.

The soundtrack is excellent with a huge variety of songs to choose from. Every stage has its own distinct theme and nothing is reused here. You’ll hear a lot of nostalgic music throughout the game and of course modern twists as well. It’s definitely a game that’s very soothing to play with how peaceful some of the songs can be and even the fast paced tunes just feel good. This is a game where you can see how Nintendo put a ton of effort into every aspect. Naturally the graphics are included with that. The game looks quite excellent at all times. The gameplay is sharp and the stage designs really pop out at you as well.

For the online modes you can play in tournaments, single races, battle modes, etc. I tried all of the options and it’s nice to be playing against other opponents in real time. I played a ton of matches and didn’t experience lag in any of them. Imagine if Super Smash had that level of attention to it? Now that would really be something. It’s also fun how you have a little point total next to your name as you play through the stages. It’s not really a ranking since you don’t know where you stack up but it does give you something to aim for as you win more and more races.

As for the battle modes, you’ve got quite a few here. The most fun one is probably the cops and robbers game as you have to dry and get out of the area before you are whacked by the other team. You can free other members who have been captured though. The game seems to favor the team making the arrests here but you do need to have strategy and doing that online can be tricky. There’s also a capture the flag game which is fun. You have to try and hold onto it for a while in order to win. This can be tough if you’re not the first to grab it though. It’s not that hard to buy 20 seconds in the initial skirmish.

There’s also the bomb and balloon modes although unfortunately the balloon one is no longer about survival. I suspect the developers were worried about players dragging the matches out too long so they turned this into a pure score battle but I always liked the idea of a survival mode since it really makes you have to drive carefully to try and stay on top there. With a score system it’s a bit more chaotic. I don’t think you will be spending quite as much time here as in the races anyway though so it’s really just more ways to play the game and you can’t go wrong there.

Overall, Mario Kart 8 Deluxe is definitely a great game. There is a whole lot of replay value here which you probably guessed from everything above. This is really a complete game in every aspect. I can’t think of a single weakness that it has and so Mario Kart 8 will really end up leaving a strong legacy behind it. You will be hard pressed to find a better racing game available and of course playing online with others is a lot of fun. The items ensure that you will have a fresh experience in each race. No two races will be identical after all and the item frequency is really quite high. The stages are the right length as they aren’t too short or too long. There really must have been hundreds of hours of research pumped into this and it paid off. The bar for the 9th game is really set quite high at this point.