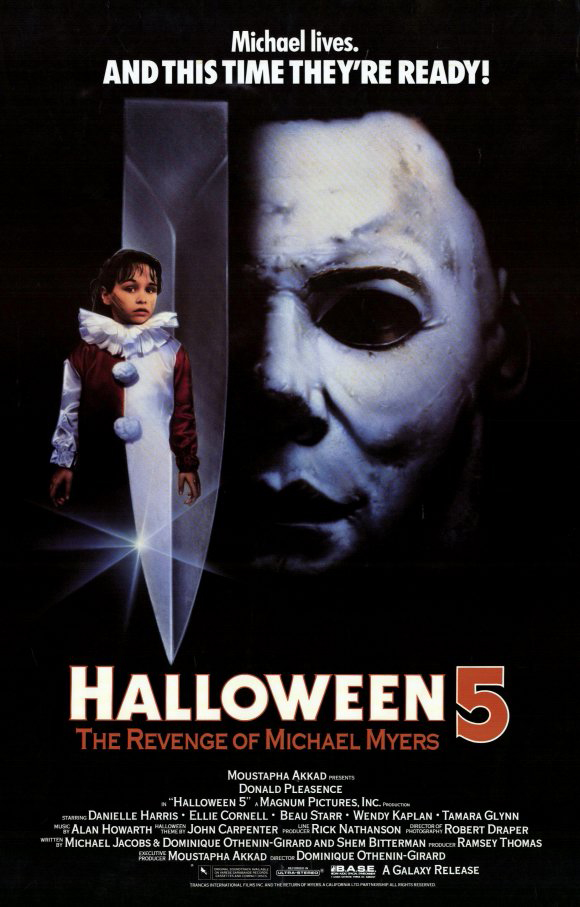 Looks like Halloween is back once more with another installment in the series. It hasn’t had any good films yet and I wasn’t expecting this one to change things. Halloween 5 is a very by the books slasher where Myers is just taking down anyone who gets in his way. The characters just can’t get away from him anymore and should really go as far away from town as possible when it’s Halloween. Too bad the residents of this town aren’t nicer though as nobody seems to take Myers seriously until it’s too late. The movie plays out exactly as you would expect it too so don’t expect anything different here. The tagline may make you think that the town’s going to fight back or something but that was in Halloween 4, not 5.

So the film starts off by changing the last film’s ending a bit. Myers actually ended up surviving and falls into the river where he ends up in a coma for a year before waking up and murdering the guy who found him. I have to assume that this guy was insane for keeping Michael Myers at his place for a year and not doing anything about it. From the creepy set up though I assume the guy was probably another villain though so it all evened out. Well, now that it’s Halloween time again, Myers wants to destroy Jamie once and for all. Can he pull it off or will the cops manage to stop him?

Jamie’s not in a great place either though. After the events of the last film she was traumatized so hard that she can’t really talk anymore. Additionally, she has a psychic link where she can feel everything that the victims feel before Myers takes them out for good. It’s probably the worst kind of psychic link you could ever have since that means it’s like Jamie is murdered multiple times here. I don’t think there was much of a point to this plot because the psychic link randomly ends later on. That’s probably for the best for Jamie’s sanity. Her plot of not being able to talk also ends when the writers are done with it.

Jamie ends up being a very annoying character throughout thanks to this though. She never helps with the investigation and almost seems to protect Myers at some points. I don’t understand her in this film and if she’s conflicted then the movie should have given us a reason for this. Even near the end she tries to have an emotional moment with Myers before he just goes crazy again. It’s a terrible film for her that’s for sure.

It’s no better for Loomis though. He’s even crazier than usual here as he uses Jamie as bait more than once. He’s still yelling about Myers but since he has failed so many times I can see why nobody takes him seriously. There’s a man in a black cloak who even follows him into a house and could have murdered the guy but doesn’t for some reason. The absolute worst scene for Loomis though is when he breaks down and tries to hug Myers as if this unrepentant serial killer zombie would suddenly have a human moment.

The movie has a ton of crazy scenes like this throughout but this one really stood out to me because of how absurd the whole thing was. Nobody should know better than Loomis how crazy this guy is. A hug was never going to be in the cards. As for Myers himself, well the guy is about the same as always. He mindlessly goes around destroying everyone who gets in his way. He’s not completely mindless as he comes up with some plans like impersonating one of the teenagers he murdered. It’s not a super realistic disguise but it works so I guess it paid off. There just isn’t anything to know about Myers, he may as well be a robot with how automatically he tackles every task.

It almost goes without saying that the film is incredibly violent here. Someone is getting murdered at all times and usually in very intense ways. Jamie having the psychic link means that she also takes a ton of damage in the film even if it isn’t bloody since it’s in her mind. Then the film has the teenagers do their one night stand real quick just to force that into the movie as well. It’s a rather gritty movie all around and just feels less focused than some of the others. This one feels like they just needed another Halloween film and didn’t bother to come up with more of a plot.

If anything I was more interested in the shadowy figure the whole time. He only gets a few scenes but at least he adds the air of mystery to the film. He also has an impact on the ending which leaves the film on a nice cliffhanger. Horror films pretty much have to have a cliffhanger in each title and I can safely say that this one was on point. It’s not like it would make me be hyped for Halloween 6 but it’s a silver lining that I can grab onto.

The other human characters like Tina just don’t have a chance to do much. I would make the case that the heroines from the earlier films all had more character. For Tina you’re really just wondering if she will be able to make it to the end of the film or if she’ll be doomed. Either way at least she’s better than all the other randoms here. You have the guy who owns a car and is rude to everyone at all times. (Guy is ready to murder the others over his car) You have the best friend who doesn’t take anything seriously and then her guy who is just around for romance.

There are no human characters that are good here. You can barely even tell that one of the cops from the last film is still around. His daughter died in the last film so you figure he would have an axe to grind but the film really doesn’t pay him any mind at all. I think she is maybe referenced once at best. The other cops are even able to be tricked by Loomis and overpowered at gunpoint. Two others admit that they aren’t good cops and get clown music when they’re destroyed.

It’s such a random scene too. I don’t think this film is necessarily trying to go the comedic route but maybe they decided these characters would be an exception. There are also a ton of fake jump scares so get ready for those. Half the time the build up to these moments is all fake so after a while you will probably start tuning these moments out. Sometimes you’ll even have fake jump scares back to back which is certainly a bold approach.

Overall, This is a film I would definitely say to avoid. Halloween has never been a film series with any real quality but at least you usually felt like the stories had a real focus. This one just never seems to have any real point to it. One bright side is that the film really breezes by as a result but it’s definitely a sequel that adds nothing to the franchise. I would highly recommend avoiding this one as much as possible.