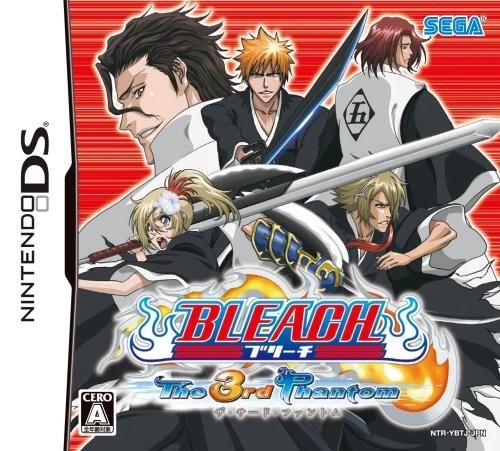 Now this is a game that I’ve owned for generations but never went around to beating it. The game’s just so crazy long and back then I wouldn’t have made it. Well, I finally got to play the game from start to finish now and it’s a lot of fun. Be prepared to be here for a while though as the game definitely takes its time with you. Be prepared to grind out some extra level ups and use some cheese as well. Without that you will be in for a rough time here.

The game starts off by introducing us to two siblings named Fujimaru and Matsuri. They grew up in the rough part of Soul Society but get taken in by Captain Seigen and his sister Konoka. They decide to look after the kids and eventually they grow up into fine Soul Reapers. Their time together is cut short when they disappear into a time portal through to the future. Now Seigen is on the side of darkness along with Matsuri while Konoka is no more. Can Fujimaru find out exactly what happened? Also…why is Aizen poised to be the greatest threat that the heroes have ever fought?

The game has 25 chapters and each one can take over an hour so you’ve got a lot to do here. I dare say that you may even spend over 50 hours here by the end of its run. The game does not hold back on how long the levels can be and even some of the cutscenes can be on the long side. So this isn’t a game that you can rush through and as a result we also get quite a lot of story to discuss. That’s for sure. A lot happens here across the two time periods.

First we should talk about the gameplay style here. It’s a tactics game so the idea is to maneuver your pieces around the board and attack the enemy when you have a type advantage. Don’t get greedy here and just take what they give you. You will be moving up to 9 characters at a time. Once you have moved everyone once then it is the opponent’s turn so you have to wait as they attack. The idea is to pick your moment so that you can attack and take the opponent down without eating a counter attack.

There’ a whole lot to describe here if I was going to go into detail on how to play a tactics game but I’ll let you look that part up. It’s fairly self descriptive anyway. You just have to find out exactly how to move everyone and what combination of moves to use. Once you have that figured out then you’ve already won half the battle. Each character can move, attack, use a skill, use an item, or raise spirit pressure. Raising your pressure lets you recover spirit energy quicker which is used to activate your skills or bankai. So naturally you want to have a lot of that at all times.

I didn’t take advantage of the items much until the end but I can definitely tell you that they came in handy. One key thing to always remember here is to keep your healer in the back. Healing usually takes up a lot of health if you’re Orihime or isn’t versatile if you’re using someone like Shiho. You have to take all of that into account when playing through the levels.

Additionally, be careful when you have to split up your team. If you put everyone on one side then the other team will end up being in a tough spot. Try to keep it as balanced as possible. Worst case if you forget you can quickly grind by using free battle. You can do this while at the character selection screen through the options. This lets you raise everyone’s level in the bonus stage. Still, you need to be careful because hypothetically you could find yourself in a position where your team is unable to beat the practice level. If that happens then there is no way to train and you’d have to start the game again. I can definitely say that I did get a little nervous during some levels in the game due to this.

Also, one tip for the final boss. The final level is a really long one and the final boss has 8000 health points while more enemies only have about 1000. That means you’re going to be in for 30+ turns of trying to take him out. The thing to know is that he can attack in any row he is facing and can seal your attacks if you get too close. He cannot hit you at a diagonal angle though so that’s how I got him. Slow and steady was my measure as I gradually drained the energy out of him while he couldn’t retaliate. It’s a tough strategy but one that saved my bacon there. I highly recommend having a strong projectile user like Uryu at the ready to pull this off. Also make sure that you upgrade each character between levels.

I’m mixed on if you should upgrade your sword or go with pure stats. I went with the sword but there were a lot of times where it didn’t seem to help much and I wondered if I should have just paid more attention to health and attack points. Those were the 2 main stats I would raise aside from the sword. Personally that’s probably a better deal than the sword so keep that in mind. I could talk more on the gameplay but I do think you get the general idea here.

The graphics are pretty solid. I would have liked some true cutscenes though instead of images all the time. I feel like the DS could have pulled this off. Ah well, the story is a lot of fun either way and I do like the visual effects here. Activating Bankai always feels fancy in a very good way. You can tell that the technique will make a difference in combat. Some Bankai are better than others but they’re all still better than not having one. I didn’t unlock Fujimaru’s though so I ended up playing without it.

The soundtrack is surprisingly good as well. There are some fun tunes here and the game knew how to get that danger feeling across. There’s a good variety of tunes here as well so you don’t have to worry about hearing the game one too often. In terms of replay value, the main campaign is so long that you don’t even need it. Still, there is a lot since you unlock the Bleach Tower where you get to go through all of the floors and take out a bunch of enemies. Apparently the main campaign is short next to the tower so take that as you will. I can’t say I would be too tempted to try my might up there. It would just take too long plus having the story is definitely a good chunk of the fun.

It was nice to see Aizen and friends here to take some names. He definitely gets a lot of respect in the game as you’d expect. Fujimaru is the main character here and I thought he was okay. He’s not really my kind of character as he slacks off/goofs off way too much but he tries his best by the end. Matsuri is way too gullible which hurts her character. She doesn’t have a lot of conviction of her own which ends up putting her in a sticky situation. Seigen suffers from the same issues to an extent. He gets suckered a lot but the guy does have conviction. Unfortunately he just tends to join the wrong side which isn’t a good look. You absolutely understand why he’s so upset but even so, he’s just going to the wrong side here.

Konoka is more on the side of reason. She’s a fun character through and through who tries her best. Finally you have Shiyo who is a bit too clumsy for her own good. This holds her back considerably. I would have liked to have seen Ichigo be the main character here and I suppose he already gets to be the lead all the time but it would have been nice to see him take names. Now he’s got to share the spotlight for a change.

Overall, This is a game that will require a lot of patience because of how long every match is. Tactic type games really are meant to have you focus on every play so it’s hard to go too fast. I would often be reading while playing because of how long every turn takes. I think there should have been a way to turn off attack animations or something like that but it’s not the kind of thing that would end up hurting the game’s score. I would still say this one was great. There is a lot of attention to the Bleach mythos so you really shouldn’t be disappointed here. It did everything it could to be one of the definitive Bleach titles and it was also cool to see the Wii game’s villain return. That guy was always pretty fun even if he couldn’t match up to Aizen. If you want to check out a tactical game, this is the one for you!