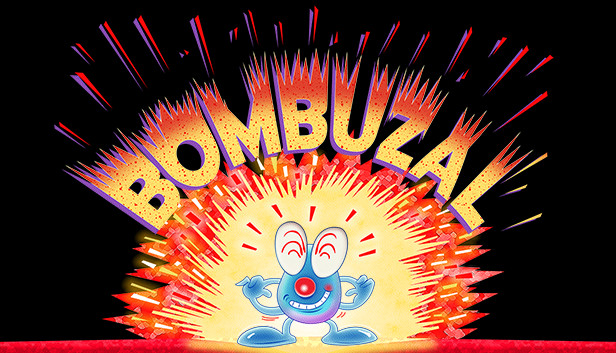 It’s been quite a while since I went back to play the old SNES titles so this was certainly nostalgic. Can the new ones possibly beat the classics though? Bombuzal has an interesting concept that reminds me of Bomberman to an extent. It’s an interesting puzzle game but one that ultimately could have benefited big time from actually having more of a story or at least some kind of illustrations between the levels. It would make the whole thing come alive because otherwise you don’t see the point of continuing after a while. There are a ton of levels here so you’re absolutely getting a lot of bang for your buck but it all starts to feel the same after a while.

The gameplay has you starting on a field with a bunch of bombs. The idea is to set them all off without being caught up in the explosion. Initially this just means setting them off and walking away. You can only move 1 space after setting off a bomb so you would go in the opposite direction. The levels quickly get more difficult though as you have to set off multiple bombs and stay out of the way. You can even cause a ripple effect where everything blows up except your square.

If you pick the wrong spot then it’s all over though. Additionally some levels will have switches and other gimmicks to help you move the bombs around. There are even teleportation squares and naturally ones that disintegrate so you can’t use the same route to go back. The puzzles are impressive here because the levels are really not that big and the controls are simple so you’re surprised that you don’t find the right answer right away.

With the game being on the simple side, you really feel like the difficulty is earned and nothing about it is cheesy. If there’s a level you aren’t able to beat then that’s on you and not the developers. Yeah some of the controls may not be made apparent at first but you’ll certainly get it after some trial and error. Some bombs even move around so you have to time it carefully on when you want to detonate them. Do it too quickly or too late and it will wreck your chances at clearing the level.

The soundtrack’s okay. The game feels like it has one main theme but it’s a catchy one that works for the levels. I’d also say that the graphics aren’t bad and hold up fairly well for their time. The explosions are nice and the controls are smooth so you don’t feel like you’re just stuck. If you lose it’s because you didn’t interpret the level correctly, not because you slipped or something like that.

With over 100 levels this game will last you quite a while. As mentioned earlier, I just think it could have used more of a story or something to break up the monotony though. Now if a gameplay is good enough then you don’t need anything else. You can play endless levels because it’s just that fun like Lollipop or Fruits Mania. The problem is that Bombuzal just isn’t in that league. If I had to guess on why that is, I would say it’s because the puzzles are a bit longer but less active. You’ll spend a lot of time thinking about what to do as opposed to just doing it. In other puzzle titles you are always moving things around to try and get a clearer picture. So in a way this one has you in the backseat for a bit. It makes all of the levels a bit longer.

There’s not much bad to say about the game except that it’s just very limited. There really isn’t a whole lot to do here and so you’ll probably grow bored of it long before you end up beating all of the levels. I would say it’s one you can just pick up and continue in the future but it’s not an easy one to plug and play since you’ll have to remember how each of the bombs work through the level designs. Otherwise you’re just going to be dying a whole lot.

Overall, Bombuzal is a reasonable game but one where the limitations really show themselves. This is an example of an old game that feels old. It couldn’t pass for more of a modern title and needed some other options to improve its replay value. If you have the Switch Online this is free so you should definitely check it out for a little while. I don’t think you’ll be going back to this one though so it’ll likely end up being forgotten after that.