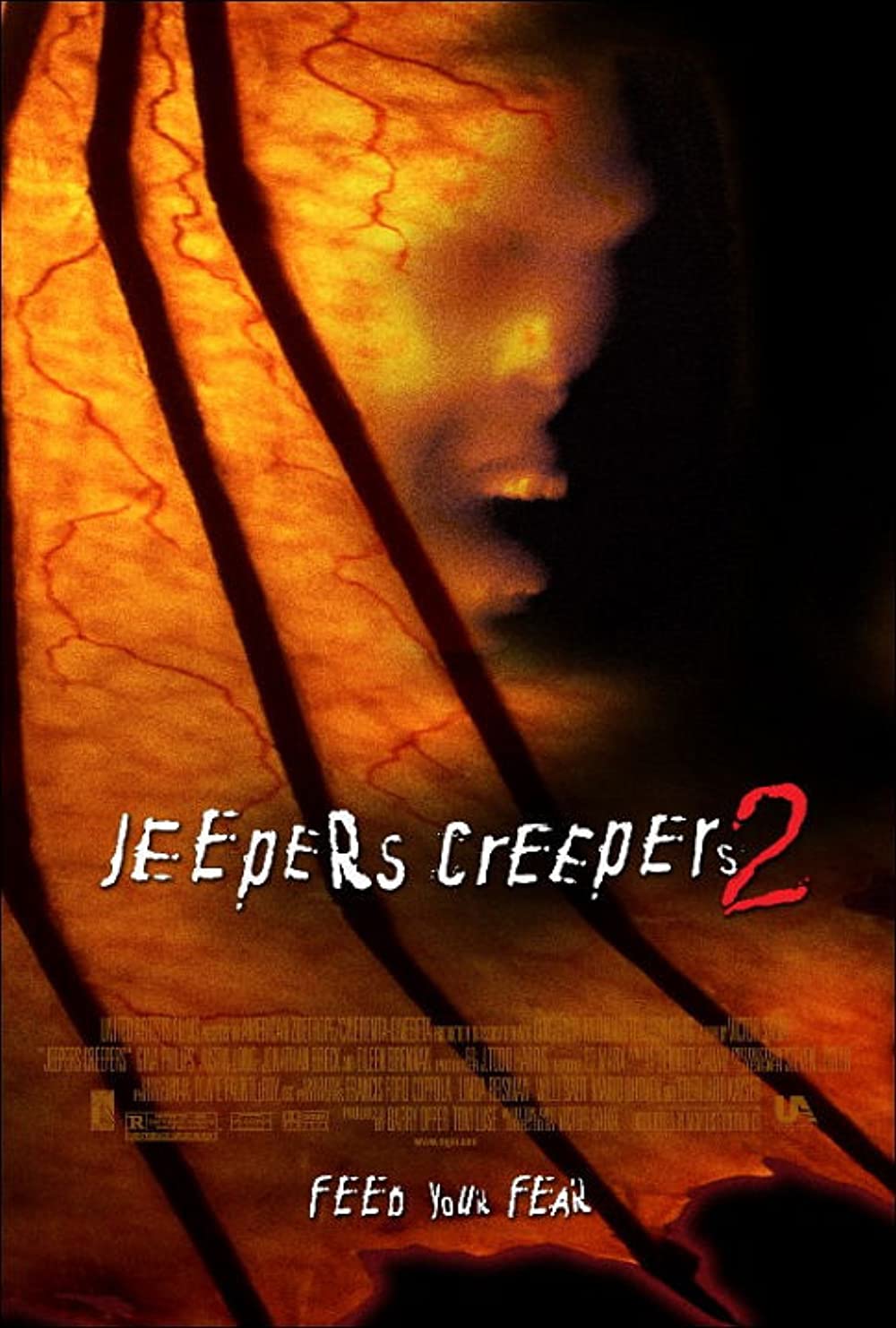 This is a review of the edited TV-14 version of the film. All thoughts below should be addressed as such as a review of the unedited version would be more negative
Looks like the Creeper has returned! The first film was not exactly my kind of tea and I wouldn’t say that the sequel is much better. The setting of being trapped in a bus is better than being in the middle of nowhere but we don’t have the big police vs Creeper fight this time around. The Creeper also seems a little less durable with how easy it is to stab him here but I suppose he tends to resurrect quicker which maybe balances things out. Either way if you’re in the mood for a slasher title then this will fit the bill, but otherwise you may want to give it a timeout for now.

The movie starts with a family farming as they have some lighthearted bickering. This gets serious though when the Creeper shows up and kidnaps one of the kids, who ultimately ends up getting murdered. The father (Jack) decides to take vengeance and prepares himself for war. We then cut to the actual main characters with is comprised of a basketball team and some cheerleaders. Their standard trip home runs into trouble when the bus tires start giving way. The issue is that this doesn’t appear to be an accident as throwing stars pierced the two tires. Minxie gets thrown into the dream realm where she talks with the guy who died in the first film and the one from the intro. They explain that the Creeper is here to eat them all.

See, the Creeper vanishes for 23 years, then he comes back and has 23 days to murder as many people as possible before restarting the process. The good news is the heroes just have to make it to the next day and he’ll go away since this is the final day he has left, but the bad news is that they are only human while this guy has super strength, speed, regeneration, and flight. The team will have to try and band together to beat this guy, but they don’t have as much unity as they may have once thought.

Naturally with a film like this you can bet that the characters aren’t very smart or likable. They’re constantly bickering and fighting among themselves instead of actually focusing on the Creeper. This puts them in a really bad spot right from the jump. Also, there is one action they keep on doing which made me cringe because it is a textbook bad decision all around.

So the Creeper punches a hole through the top of the bus and he can now grab people through it. Sometimes he just pulls their head off or he’ll kidnap them entirely. So…don’t go under the hole right? I mean, he could probably punch more holes through but either way you should avoid the one that is already there. Well, that sounds logical but the characters don’t actually pull this off. One kid in particular constantly walks under the hole and gets caught twice as a result. The second time proves to be fatal, but what was he doing?

It’s pretty easy to make sure you’re not standing directly underneath the hole and yet that keeps on happening with various characters. The Creeper doesn’t always take them out, but regardless it’s not a good idea. It stands out the most because while the situation is pretty much unwinnable the whole time, that’s still got to be the absolute worst decision you could possibly make. Beyond that I don’t mind if you decide to stay in the bus or make a run for it. Both options have their weak points.

It’s more important about trying to stay with a partner as you make a decision so you can watch each other’s back. The Creeper seemingly can be overpowered to an extent if you have enough people but a lot of times the body being grabbed may not hold up anyway. Jack is the best character by far because he actually gives the Creeper a good run for his money. The guy came prepared with some really solid weapons and I thought the movie actually had some good effects here with how the shots played out. You see just how fast the hook fires and how it hits the Creeper before he has time to dodge. It may not have been fatal hits with the first two attacks, but it did show that Jack was able to catch him off guard and deal some serious damage.

The characters aren’t as opportunistic as in the first film though with kicking the Creeper while he was down. In the first film they kept running him over which I thought was a really good idea even if he ultimately regenerated but here when he seemingly dies on the roof they waste so much time bickering again. He just wakes up and by then it’s too late. This group really couldn’t get it together. While I didn’t like any of them all that much, I will give a special shoutout to the main jock for being the worst. I believe his name was Jake but basically he was jealous about not getting to play a lot and thinks he’s better than the other players around.

The reason he’s pretty bad is because he is the one to first suggest sacrificing some of the other kids. That’ always a really bad point to me because it escalates the tensions for no good reason. He’s basically turning the team against themselves. Jake puts a lot of stock into the dreams and prioritizing his own safety when they should just fight as a team. Look at how good Jack did against the Creeper. Surely the teens could do even better if they all paired up so betraying them all was an awful idea.

As for the Creeper, I still can’t say he’s a particularly interesting or good villain. The guy definitely goes for the creepy vibes as he even sticks his tongue out at the group but there’s nothing cool about him. Scenes like that just make you shake your head. In general this film wasn’t quite as out there and over the top gritty as the first one though. You don’t have as many body horror kind of scenes even if they are mentioned. The film still does get very violent for sure but it’s all a bit toned down from the first. It’s also not nearly as scary since the film is going more for thriller moments than horror ones at times so it balances out.

I was glad that we got very solid continuity nods to the first film. I always think a sequel needs to fully acknowledge the original because that’s how you build a strong continuity and I was satisfied with how that was handled here. I also thought the film really had a good ending here. It was really satisfying for one character at least. While the odds may not be in his favor going forward, you like to think that maybe he can secure the win at least for the next cycle. He’ll need a new plan for the one after that but fortunately there is plenty of time to do so.

Overall, Jeepers Creepers 2 is a step up from the first film but it’s in no way a good film or even approaching that level though. It still has a whole lot of weaknesses. The film deserves some credit for actually giving the Creeper some weaknesses so the heroes have a way to win. Even if you know a bunch of them are probably not going to make it, at least there is a path to victory so the whole adventure doesn’t feel pointless right from the jump. If anything it makes me think that the characters from the first film could have both survived if they kept running the Creeper over instead of the guy telling the main heroine to stop for some reason….he wasn’t very smart throughout the movie though so it lines up.