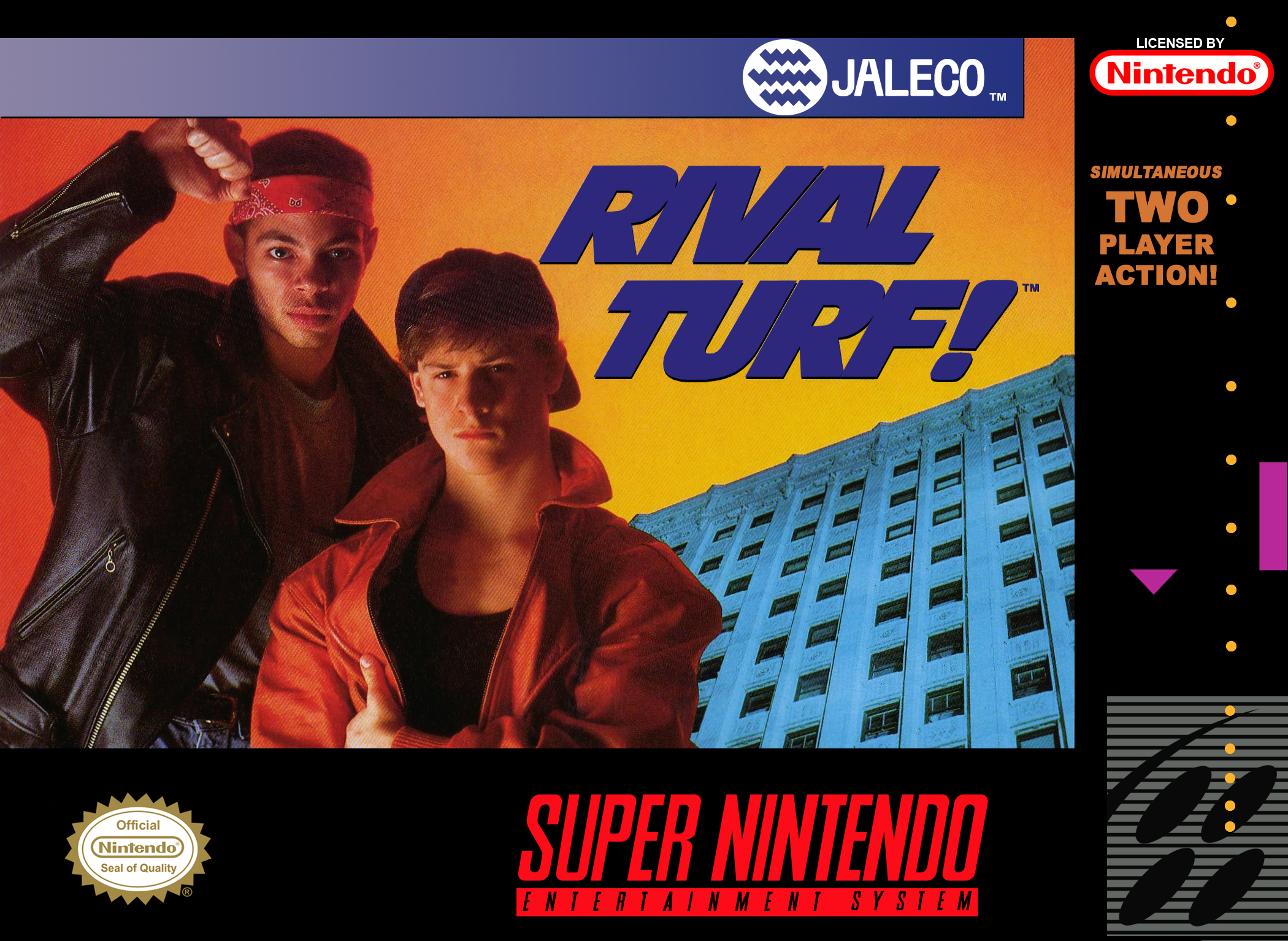 Rival Turf! is a fairly intense beat em up, but it’s the kind that forces you to start all the way from the beginning when you lose all of your lives. This is not completely unheard of within the genre but I have to say that I never liked this approach. To me, there should always be a way to continue until you get to the end of the game. There have to be checkpoints or some place to return to. Not including that feels like an unnecessary hurdle and it’ what keeps this game back.

It’s hard to say what the plot is here at all since there isn’t even an opening cutscene. You beat a lot of dudes up as you go through the game though so I’ll assume it’s your classic gangster story where a bunch of gangs have taken over the city and you have to stop them all. Either way the focus here is definitely just on beating everyone up and it’s fair to say that the villains made a huge mistake in going after the main character’s town. That’s going to come back to haunt them.

Each stage has you beat up a ton of enemies until you get to the end. At that point there is a boss that will show up to fight you in deadly combat. Don’t give the opponent an inch, just keep on going. Now this will be easier said than done though as each of the enemies do have some fairly good attacks to hit you with. One of the toughest kind of enemies to deal with is one that always approaches you with a big flying kick. The only way to effectively get around that is often to try and land the kick first or just stay out of the way.

Typically in games like this what I like to do is wait a little higher or lower than the opponent so when they walk over I get the first hit. In a one on one scenario this does tend to work but it’s hard to set up when there are a bunch of enemies rushing you at the same time. At that point you just have to fight hard and try hitting as many of them as possible. In a lot of ways it feels like a button masher so you just have to get in there and keep on landing blows as quickly as possible. If you get lucky or do really well then you may be able to beat the level without losing too many lives.

There are 6 levels here and I died in the 5th one. You get 6 lives and can continue 5 times so in a way you’ve got 30 lives. Typically I would lose 6 lives in each stage but that number kept increasing as I made it through the game. Ultimately that’s what got me here. The enemies were just too vicious and they really showed me what was going on. This is where I say there should be a way to continue the game from the 5th level. To me that makes sense so you could hat least see how it ends and go from there. This is the kind of game where even rewinding and restarting doesn’t help a lot because of how crazy strong the opponents are. Sure, with enough patience you could probably pull it off but it would take a long while which is probably not worth the hassle for this game. You would need something a lot more high end which should already have that feature anyway.

Aside from that one big feature not being here, the gameplay is solid. 2D beat em ups don’t tend to be my favorites until you reach the 90s and later on where they added a bunch of depth to it. Like I really enjoyed the X-Men GBA beat em up game because of how it incorporated all of the X-Men special techniques and powers into the combat. It wasn’t just any ole beat em up, it felt like a real X-Men game. For a game like this I know powers are off the table, but giving the characters more to do would really help it stand out. Of course this game is fairly old so that critique doesn’t apply as much but this game just doesn’t stand out.

I thought Double Dragon did a much better job of executing on this concept, not to mention it also had more of a plot. Considering that this game is for the SNES, I don’t think there is an excuse not to have some kind of story included in the game. At least if you ask me that seems like a reasonable request. Ah well, at least the graphics are solid, I do think the game still looks good all the way through. There are a good amount of level designs and they all look different so it’s not just reusing them.

Additionally, I would say that the soundtrack is solid as well. So the game does have some things going for it. There’s no real replay value but the game is difficult enough where that shouldn’t be a problem. Even though you theoretically can beat the game within an hour, the odds of you doing that are slim to none with how hard the game is. You really have to learn all of the villain patterns and movements to take them down efficiently. Additionally it’s hard to plan when so many of them are rushing you at once so good luck with that. A lot of it will come down to instinct.

Overall, Rival Turf is a game that has a good combat system but other areas of the game hurt it like the whole thing about not having a way to restart at a specific level. Going back to level 1 is something I never enjoy, it just feels way too harsh of a punishment if you ask me. You should be able to beat the game normally and if needed just have the extra continues destroy your score at the end or void it. Seeing the cutscene as the game ends is the important thing. Either way there are other titles you should check out within the genre for a better all around experience.