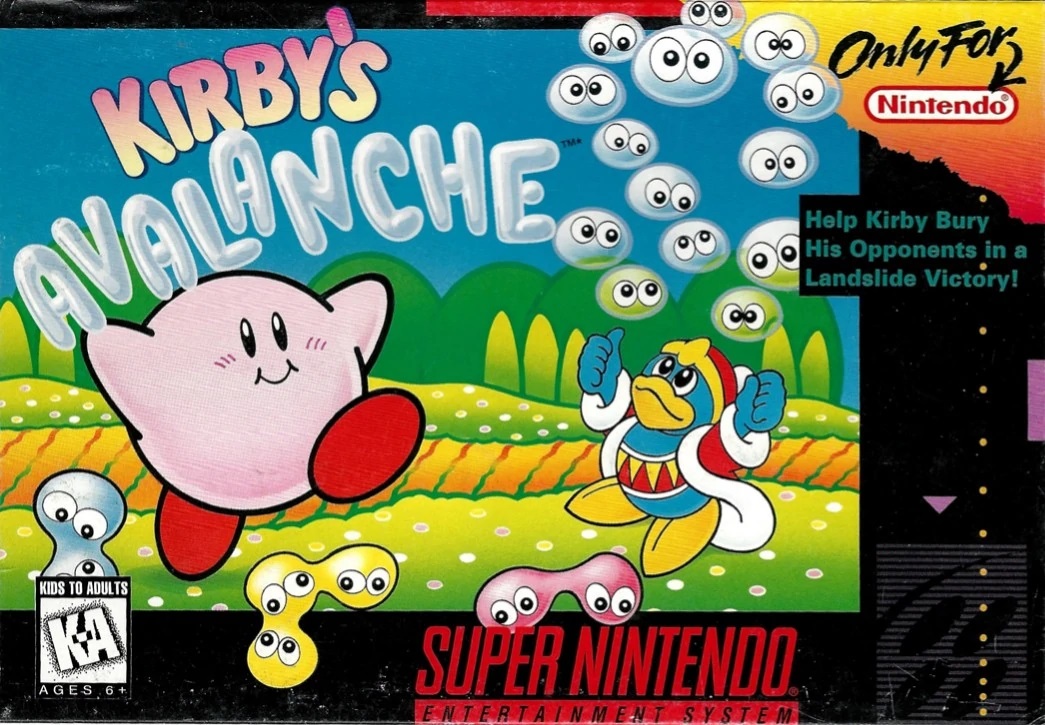 Kirby is back in action and in top form I must say. He gets a lot of quality dialogue here and I wish they had let him continue to talk in the future games. Kirby’s really got a lot to say and he isn’t afraid to show it. If Nintendo had kept him like this for future games then I think he would have a similar rep to Sonic the Hedgehog as a fairly sassy character. Ah well, it wasn’t to be but I do like Kirby well enough as is anyway, it’s just fun to see this side of him. I guess he just takes Avalanche very seriously!

There isn’t much of a plot per say but Kirby keeps on challenging a bunch of fighters at Avalanche. Some of them try hurling insults but Kirby shuts that down real quick. He’s very direct to the villains that they need to train a whole lot more if they ever want to defeat him here. I love that confidence and it really shows why Kirby is the universe’s hero! There are around 13 levels or so here so this is a short game. Well…short if you are good at it! The game is impressively difficult and unless you’re familiar with this style of gameplay then you’re going to be in for a world of hurt.

It’s sort of like Tetris but I think this exact game is called something else. Basically you have a lot of gels falling at you and you have to match 4 pieces of each color together in order to get a match. That breaks them which opens up more space on your screen. The idea is that you never want to let your screen fill up entirely while filling up your opponent’s screen. When you match a lot of these gels then you will be able to throw stuff at the opponent’s screen. There is a strategy element here where you may feel that it is better not to match something right away so you can match a longer combo later but it is risky. If the opponent throws some gels at you then it can wreck all of your plans.

The game is fun enough but for me it’s not enough to hold up a whole game. I wouldn’t be playing this one much longer than the time it would take to have a good basis for this review for example. With a few more cinematics or something like that then it’s definitely possible that this game would be engaging enough but that’s not the case here. I did appreciate that we got a little voice acting and a fun script for the cutscenes though. I really can’t ask for much more than that.

The game is free with the Nintendo Switch Online so there really isn’t any reason not to check it out. Put in a little time here and if you end up liking it a lot, well now you have something to play and have fun with. So it’s a win/win decision all the way through. The graphics hold up well too and are nostalgic while still being fairly detailed. The game doesn’t feel low budget at all or anything like that. The soundtrack is also on point and it’s always a lot of fun to hear the classic Kirby tunes.

If it had a few more modes or things to do then I’d like it more. Of course you can’t expect it to have more than the normal mode so that’s just me. Considering how incredibly difficult the game is, you’ll be getting a good amount of content here and you get unlimited continues so you never have to worry about going all the way back to the beginning. I definitely like that since being sent back always feels like a waste after you’ve put so much time into the game. This is easily the best way to handle this gameplay.

Overall, There isn’t much more to talk about though since this is really a one mode game. How much you enjoy it will depend on how much you enjoy the gameplay. If you’re really talented at the machine and strategy then you’ll get to enjoy all of the fun Kirby cutscenes. They really don’t make quick Nintendo titles like this much nowadays and it’s too bad because they could dominate the market with tons of free to play app games in this kind of style. It doesn’t seem like that’s in Nintendo’s plans but they could really make bank this way. I’m closing in on finishing all of the SNES online titles, just 3 more left now!