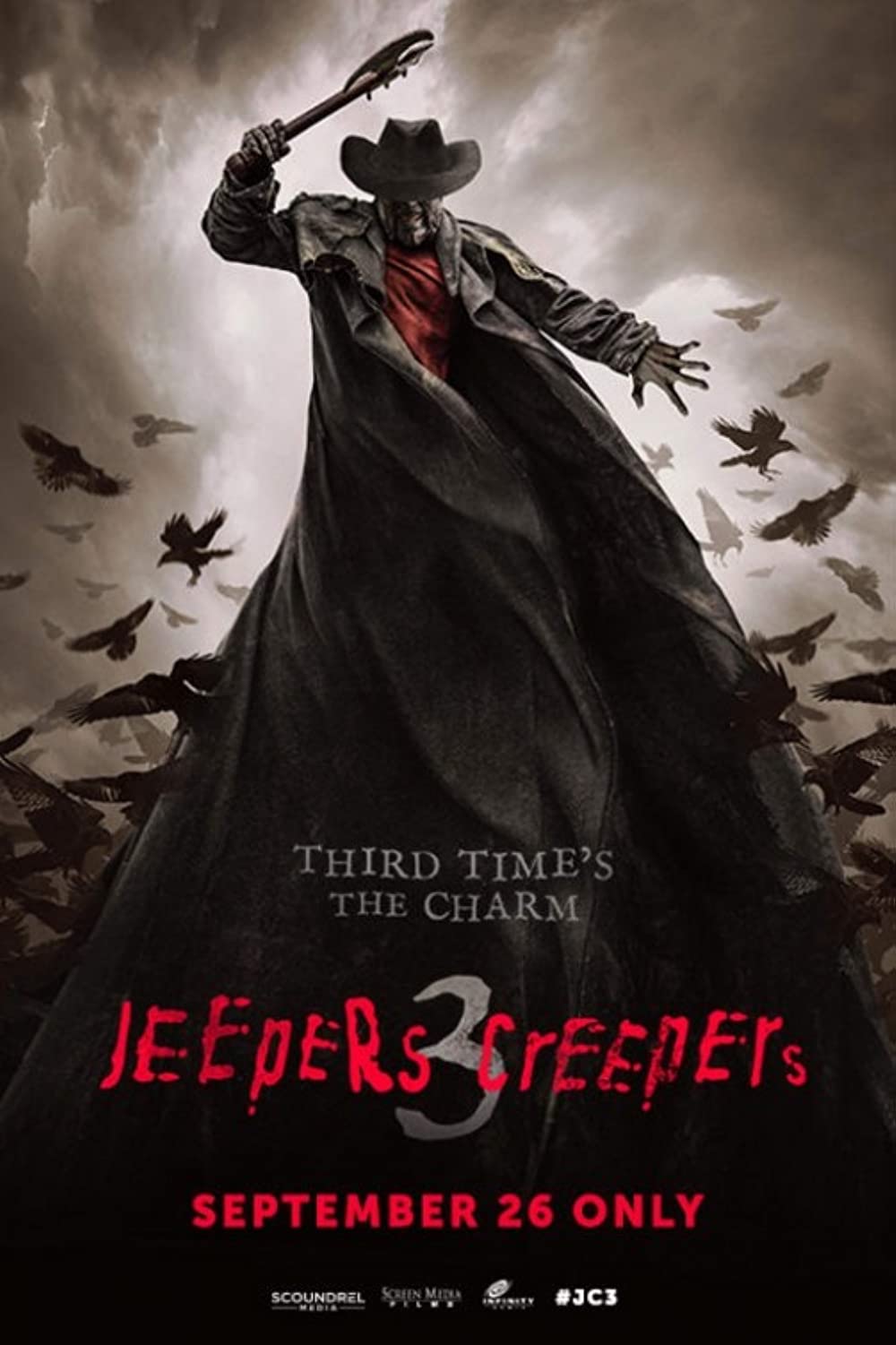 It is time for the return of Jeepers Creepers. I wasn’t exactly a big fan of the first two and I can’t say that anything has really changed with the third one. This time the Creeper actually gets to be outshined by his own truck though so that’s a bit of a twist. It does make for a very imposing threat since you can see how the heroes would have almost no shot of getting out of it. The movie doesn’t really do anything all that different from the first two though so there’s not much reason to check this one out.

The movie starts off with the Creeper messing everyone up as he escapes with his van from police headquarters. Dan arrives and informs the local police chief Davis that this is just the beginning. Apparently everyone has their big awakening where the Creeper is concerned where they decide to do something about this madness. He makes the case that Davis needs to help him track the Creeper down now before he gets away again. What can you do against something that can fly, regenerate, has super strength, speed, and a car of gadgets that would even impress Batman? Well they have another one of those spear gatling guns. These films seem to love this thing despite it never working for long but hey it’s better to try something as opposed to nothing right? Meanwhile there are a bunch of teenagers running around and you figure that they’re doomed.

The film doesn’t have many positives so lets go over those first. First off we have the ending of the film which does a nice job of tying all 3 movies together. Presumably the 4th movie would have been really solid if they had actually stuck to this plot. Okay…that’s probably giving it too much credit but I do think that it could have been rather decent compared to this one. The ending leaves things off on a hype note even if you figure that the characters don’t have much of a chance of really making a difference.

I also thought that the plot with Sheriff Dan was decent for a while. It’s certainly more engaging than the main one at least as everyone is very dramatic and they all talk a good game. The problem is that this doesn’t directly translate into wins. No matter how much planning they do, it’s not like they’re ever closer to actually securing the win. That’s probably the most annoying part of the movie, there is never a single moment where you think that they have a shot. The Creeper is just too powerful with no true weaknesses so the movie feels futile right out of the gate.

There is a whole subplot about finding out his past but it’s super pointless. Basically if you grab onto his hand you see things…presumably his origin story and stuff like that. At no point in the film does it ever become important or useful in the fight though so I don’t know what the writers were thinking. Gaylen grabs the hand first and is taken into a trance but for the rest of the film all she can do is talk cryptically. It would be nice if she could have hared the intel…you know so nobody else has to grab the hand? Since she does not then Dan has to do it next…and also doesn’t tell people anything useful. Sure we get a sign at the end taunting the Creeper but does it matter?

Sounds like they’re trying to hurl some insults by saying that they know about his past but why would he even care? Apparently he does but they really couldn’t have known that. A significant chunk of the movie is spent on this pointless mystery so that didn’t do the film any favors. Dan looks all the worse for it since he deserves a lot of blame on the planning. Davis at least did decent in covering him with the gun. I thought he meant well and while he didn’t stand a chance, he didn’t back away from danger.

Gaylen at least told Addison to leave so she wouldn’t be in danger but didn’t do much beyond that. She was just way too old for this kind of adventure. Addison has a little romance plot running around but her family is rather annoying which doesn’t help matters. Her brother is a juvenile delinquent who runs around putting animals in cages for no good reason so of course he gets bumped off. His friends aren’t much better and everyone takes years to take the animal out of the cage. Cmon now guys.

Addison and Buddy also handled one situation terribly. So they drive up to this ranch where everyone is hiding underneath their cars. You might figure this is a great chance to just drive on out of there, slowly back up, dial 9-11…or something. We know you wouldn’t get out of the car…right? Wrong! Buddy gets out and walks up to the guys asking why they’re hiding under a car. No matter what the answer is, it’s probably smarter to be in the car. Maybe it’s a guy with a gun running around, a bear, hornets, etc. Why get out of the car? He’s lucky he wasn’t taken out on the spot by the Creeper but that guy likes messing around to increase the level of fright since he still consumes that as energy. Addison and Buddy did not handle anything very well here so they could be annoying.

The film’s writing is bad for all the reasons I already listed above. It’s also about as violent as you would expect with this kind of slasher film. Everyone is getting bumped off left and right by the Creeper and are unable to do anything about it. The van makes for a very unique set of deaths for the heroes but ultimately this isn’t a movie that is used to showing a lot of restraint. It’s just going for the shock value and at the end of the day that isn’t going to really help it surpass the earlier films. The Creeper is also still such a bad villain, there’s nothing cool about him. The design is weak and while his powers are good, there’s just not much to him.

Overall, The only appeal to this movie would be the ending as the franchise starts to form something of a real story but since the sequel never came out there is no longer much reason to watch this film. It goes through all of the usual motions of a slasher film but the writers couldn’t figure out what kind of plot they wanted to tack onto it. As a result you’ve just got narrative dead ends that don’t do anyone any good. The movie just needed to be honest with itself about wanting to just have an excuse to get everyone bumped off.