This review is of the TV-14 edited version. All thoughts below should be addressed as such as a review of the unedited version would be more negative 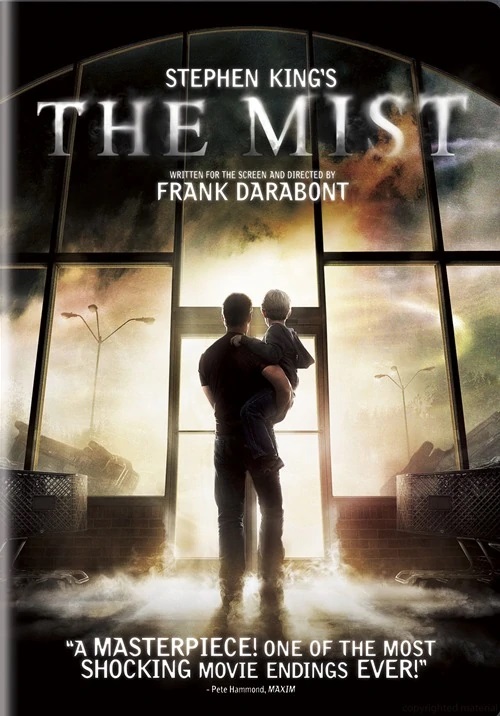 It’s time for a rather intense thriller with a title that sounds like the Fog but the plot is very different. It’s a very interesting movie and I like the idea of being stuck inside a supermarket but the film ultimately trades the idea of a very atmospheric horror for a more graphic adventure

The movie starts with David and his son Billy heading to the supermarket to pick up some supplies. There had been a really bad thunderstorm after all so they want to be prepared. Unfortunately a heavy mist rolls in and before the characters can leave the store, a guy runs in claiming that there is some kind of monster outside. Any who walk into the mist shall vanish quicker than a wish. Everyone is rather skeptical of course including a lady who decides to run out and take her chances. It’s all very silent outside. David gets a glimpse of one of the monsters when he goes to the back room but of course most people didn’t see this. As the film goes on the characters start to get more and more desperate. Are the people in this supermarket actually more dangerous than the monsters outside?

I mean the answer should be no but at least with the monster you can count on a quick death in theory. Inside the supermarket everyone is slowly turning insane so it’s hard to say what you can expect. The main antagonist here is Carmody as she is someone who is completely delusional and tries to start a religious cult within the market. At first everyone knows that she is crazy but as the movie goes on the more weak willed members begin to believe her. It’s evident that people are losing their minds and fortunately David as well as a few other characters actually see this coming right from the jump.

Sometimes characters can be slow on the uptake for this kind of thing so I was glad that this wasn’t the case this time. They were actually ready and actively plan for this. It goes without saying that I lost respect for any and all characters who ended up siding with Carmody. It’s just so apparent that she is crazy that it’s disheartening to see these characters follow her so readily. Clearly their minds are highly susceptible to being taken over which doesn’t speak too well of them. Some things do go Carmody’s way of course but they’re all coincidental at best.

I enjoyed the first half of the film the most as the situation slowly starts to set in for the main characters. There is no easy way to escape their predicament and the supplies at the market will only last so long. Additionally the defenses at play here won’t last forever here either so simply staying put isn’t an option. No matter what you do there is going to be a huge risk. Personally I’m of the camp that says to try to get into a car and just drive away as fast as you can. I think that’s the best way to at least give yourself a chance to escape while the other methods just feel like you are delaying the inevitable which isn’t really what you are hoping for.

The atmosphere is tense and the characters all sound reasonable aside from Carmody. One of the big antagonists here is Brent and it’s not like he’s evil or anything. He just thinks that the whole story about there being a monster in the Mist is fake and he figures that David is messing with him. The two of them never really got along much before now so it’s not even that far fetched. My main issue with him was just that even if it’s not a monster within the mist, it could easily be some kind of chemical weapon or something equally destructive for your health. So walking out there isn’t the best idea if you don’t have a plan.

I liked his confidence and he is good at getting people together but ultimately he was on the wrong side in this one. If he had just been willing to work with the main characters then I dare say that the film would have gone a lot better for the main characters. It still would have been tough of course but the situation wouldn’t have deteriorated nearly as fast. Billy isn’t able to help a whole lot since he’s way too young for any of this but David does good. He comes up with a lot of plans and is quick on his feet.

He particularly did good in the back room when everyone is trying to act really macho with how they aren’t afraid of the monsters. When they all froze up, David didn’t. He kept on trying to save the poor kid and did his best throughout. He certainly loses his cool a bit during the movie but at least it’s always fairly well justified with how everything is going at the moment. He makes for a good main character here. In general the cast is fairly large. You’ve got quite a lot of people in this supermarket and they range from being reasonable people trying to help the main cast out of ones who join up with Carmody. You see where each character’s true loyalty lies in the end.

Where the second half falters for me is it starts to get really violent as the creatures start to shred everyone. Each wave of attacks from the enemies starts to get worse and worse as they really don’t hold back. People are nearly burned alive or just straight up eaten at times. One death is like something out of Alien. It’s not quite the chest bursters but it’s surprisingly similar. The movie goes quite far once we get to the violent phase and it never lets up. It may help to underscore just how dangerous a predicament everyone is in but at the expense of the slow burn it had been doing so well with.

I would have liked it if the film had stayed more like the first half. In a way I wouldn’t mind if we never even saw the creatures but of course that’s only one route. Way I see it you play the film out like this which is still a great approach in concept as the enemy waves keep coming and people have to choose between defense and escape. Or you go the alternate route where people choose if they want to leave or not but every time they enter the mist it gets really quiet so you as the viewer have to decide if they got out or not. It would be more like a Twilight Zone episode with that kind of suspense throughout. Two very valid approaches that I think could really work out for this one.

Also the ending was really bad. It’s one of the least satisfying endings I’ve seen in a while and I would completely change it. The ending is an absolutely key part of the movie so when that doesn’t live up to expectations then things get really tricky. I also disagreed with the main character’s decision there. It’s a drastic move that you would only even think about taking at the last possible moment. Not when you think something is going to happen but when it’s actually starting to happen. It’s a key difference there and the ending certainly has a lot of shock value at the ready but I didn’t like it. Kind of ends the film with a whimper.

Overall, I like the concept of the Mist. Having a big survival film where the heroes have to try and survive without turning on themselves can be a lot of fun. I’d like for the humans not to crack at least once in these things though. You could absolutely still have a lot of issues and problems come up without having the humans turn on each other. It seems unlikely that a film will end up going this route but I do think there is a whole lot of potential there. Either way the film just decided to let loose a bit too much and went for the gritty route as opposed to keeping this very ominous. I’d say to give this one a skip and instead just think about the premise and play it out in your head because it is still a sound idea.