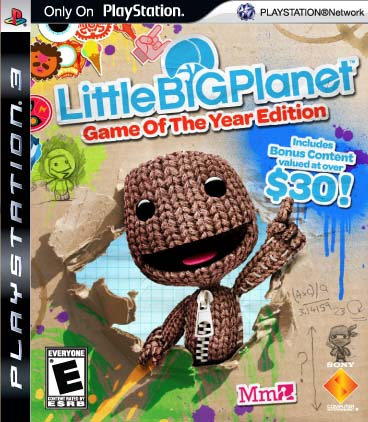 It’s time to take a look at Little Big Planet! This game was fairly big when it came out and it took me a while to finally get it. Many people started comparing it to Mario and it was supposed to be Sony’s big answer. Well if that is the case, then it is safe to say that Nintendo won this round by a mile. LBP’s gameplay is decently solid, but the whole game tries to be very “art house” and meta instead of focusing on just being fun and easy to get into. The plot’s also rather lackluster, but what else is new for platformers?

You play as Sackboy. It is heavily implied that the characters know that you the player are controlling Sackboy. The game constantly tries to be meta like this and all of the characters are actually paper cutouts. They are all being manipulated by a mysterious villain known as the Collector so you have to go around saving them all and proving that the Little Big Planet is more resilient than the villain thinks. Honestly, the story would have been much better if it wasn’t constantly trying to remind you that the whole thing was fake. The main villain even cries at the end and quickly turns good so fast that you had to wonder what was going on.

As a result of the game trying to go for a very indie feel, the graphics were actually pretty bad. Honestly, they looked worse than the average PS2 game and I’d take good ole N64 and PS1 games over it. The graphics just weren’t my style and the fact that they were all made of paper just seemed like it was an easy way to save some money on the budget. It was all pretty iffy if you ask me. The soundtrack was fairly decent I suppose, but certainly not memorable. There are no tunes that you’ll be humming to yourself afterwards.

As I mentioned at the beginning, the plot just isn’t good. You have to ignore the graphics and the story and just focus on the gameplay. That’s the only way to really enjoy Little Big Planet. Even then, it is a lot choppier than Mario. Possibly to reinforce the fact that they’re all paper, it’s easy for Sackboy to get stuck to objects or jump a little too far. I died quite a few times in the thunder level because it was hard to control where I was going. It didn’t feel like it would have been much of a challenge if the game had Mario’s level of refinement. It’s just so much smoother than this title.

All right, this has been a pretty negative review so far. Keep in mind that the gameplay is still good, but it’s more at the level of Flip’s Twisted World than Mario. It feels a lot more like an Indie game than a AAA title and maybe it is I suppose. Regardless, it didn’t quite live up to my expectations. I was expecting a very different game than what I got, but that’s the price of not really looking up a game until you buy it. Just as some will be better than expected, others end up turning out worse.

There is a lot of replay value here to help hold the game up. After completing the game, you are only around halfway done at best. There are plenty of other levels to complete and stickers to assemble. Along the way you can aim for the Platinum Trophy which seems fairly reasonable to obtain. It would take a long while though and you’ll need to master the controls along the way. They definitely do get easier to use the more that you play the game. Doing all of this will definitely extend the play time of the game. The actual story is reasonably short and you can complete it in a few hours, but the Platinum should easily take you to around 20 hours if not longer.

There were boss battles in the worlds, which were fun as well. Most of them were pretty easy, but the fights were well thought out. I also think that all Platforming games should have bosses of some kind to change up the gameplay and to just provide a nice challenge. It at least offers the semblance of a story. I guess this game should be described as more of an experience than anything else. You get to run through various levels like a desert or a haunted house. The haunted house was definitely the most tense and atmospheric level while others like the Canyons were fairly generic. There is a great contrast between the various worlds and I suppose that’s a good thing. You can also create levels in this game which is a fairly big deal, but I skipped that part. Maybe I’ll go back to it someday, but with Mario Maker in existence, there’s no real reason to use any other title for level creation.

Overall, Little Big Planet may have not been the platformer that I wanted, but it’s definitely the one that I deserved after not giving him fights on my blog for so long. The game was disappointing which had an impact on making this review so negative, but keep in mind that it is still a decently good game. There is a lot to do here and the gameplay was decently well thought out. I always talk about how gameplay is really the bottom line for a video game and this title is the perfect example of that. The execution wasn’t perfect, but the game did try to give you as much control over Sackboy as it could. You can change his facial expressions, make him give a thumbs up, and a lot of other customization. You can dress him up any way you see fit and that can make the levels a little more entertaining. I don’t imagine that I’ll be buying the sequel anytime soon, but if you’re looking for a good platformer to spend some time on, this one will work as well as any.