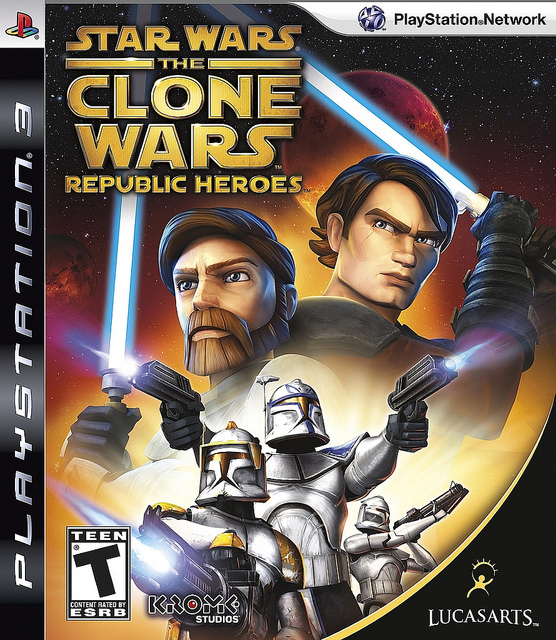 It’s time for another title set in the Clone Wars. Republic Heroes may be the first Star Wars game that I’ve played on the PS3, but it ended up being the weakest installment in this saga. I don’t know why, but it just couldn’t hang with the others. I blame it on the game’s poor gameplay mechanics and lackluster plot. It’s still a solid game that will last you for a reasonable amount of time, but I was expecting a little more since we are now in the modern era.

The game has you split up into several groups. It appears that Count Dooku is up to something again and he sends Ventress off to cause some havoc. Cad and Kul are also fighting over a weapon of mass destruction. I don’t think we ever actually learn what it does to be honest. Well, Anakin and Ahsoka go to check things out while Obi Wan and a Jedi master I’m not familiar with head to a space station. Two other Jedi Mastered investigate the canyons and along the way the Clone soldiers do their best to help out as well. The heroes have spread themselves rather thin, but they’re always ready for danger. Hopefully they are prepared!

Here’s why the plot sags behind the others…there are no hype moments. The original Wii game was a blast because of the stellar soundtrack and the tough talk between all of the characters. It worked really well as a result. The DS game worked because of the fun gameplay and I really enjoyed the Shadow sisters as villains. The problem with this game is that none of the villains are particularly interesting. They don’t feel like threats either. Cad is a guy with a gun…so he shouldn’t last long. Kul is a robot who has a lot of weapons, but it seems like it’d be an easy matter for the Jedi to swing him around. That just leaves Ventress and Dooku but since they lose in all of the games I don’t think we’re meant to take them too seriously anymore. The banter between the characters can still be pretty fun and the characters aren’t bad, but the plot could use a little work.

The gameplay is 3D hack and slash. You have to fight your way through large armies of droids as you try to keep your wits about you. There is a lot of variety as you will play as both Jedi and Clones as well as ride hovercraft and large robots. You can also jump onto any enemy to control it and force others to try and oppose it. You can use your Force abilities or go in close for the lightsaber. The Force is incredibly overpowered here so the game got that part down pat. To make up for this, it doesn’t give you all that much money so if you want to buy a lot of stuff in the shop you should stick to close quarters combat. I was able to buy everything anyway at the end and I used a lot of The Force so money isn’t a huge issue. Even if you don’t have enough by the end you can probably just replay a level and you’ll be good to go.

It’s fun to mow down legions of enemies with your blade. The game can feel like a mini beat em up at times due to this. That’s also why the Force waves are fun as you can send about 6-10 enemies flying with a single hit. Unfortunately the gameplay can also be a weakness. The title uses an odd auto jump system where your character will lock on to an object and try to land in a controlled arc when you jump. The problem is that the character can’t decide what to do right away so a lot of times he unlocks right as you jump and you plunge to your death. You always have to wait a second before jumping to make sure that you don’t flal. It feels rather odd and it’s a weird part of the game. I had a ton of deaths that way.

Fortunately, there are no real deaths here. Each character has infinite lives and even if both die at the same time, you’re still fine. I am playing on the first difficulty though so maybe that changes later. I wasn’t about to start the campaign on hard after all. It’s pretty useful I admit even if it maybe does make the game a little too easy. I did die over 140 times according to the stats though so I probably got sloppy thanks to it as well. The game just doesn’t explain things too well at times like how to defeat the large droids. That kind of messed me up at times and those bosses would take ages. Just remember to jump on the enemy when in doubt since it automatically destroys most of them.

The main campaign has around 35-40 levels and each of them is about 5-10 minutes long. That will last you for a good amount of time and getting all of the PS3 trophies will add in some replay value as well. There are a lot of collectibles to grab so keep a sharp eye while in the levels. The more that you grab now, the less that you’ll have to worry about in the future right? I grabbed as many as I could, but I believe that I may still be missing around 30 or so.

I wouldn’t say that the graphics are all that good. They look like a Wii game rather than a PS3 one. They haven’t really aged well I’ll admit. It’s not like they’re awful or anything though, they’re still good enough. The blasters and attacks look good at any rate. The soundtrack is rather limited. It uses a lot of the same themes from the other two games. Surprisingly, the only good theme in the game was the end credits tune. That one was surprisingly amazing so I’m a little sad that they saved it for the credits. It should have been used for the actual game if you ask me.

I’ll give the game credit for handling the Force well though. This game probably had the best application of it from all the games that I’ve played so far. It was actually very useful the whole time and didn’t feel like a tacked on feature. There were also no artificial moments made to make the game longer. Every level was direct and to the point. I can definitely appreciate the game’s honesty there. I’ll take a 6 hour game with no repeating levels than a 30 hour one where it is just the same level over and over again.

Overall, Star Wars Republic Heroes is a good game. It could have easily been a great game if the gameplay was smoother and the story was more interesting, but it tripped up there. There’s no way I’d die 140+ times if the gameplay had been smooth. It feels a bit like a cash in at times, but you can tell that some effort was still put into the game. It at least feels like a real game and the levels go by fairly quick. The developers certainly had a bunch of ideas as the game introduces new features even near the end of the game. It’s interesting to see a tutorial message pop up when you’re in the final act. It may not have all worked and they should have used some more time to refine the actual platforming element of the game, but it’s a nice package overall. I’d recommend getting it. It’s not the best Star Wars game on the market, but it’ll introduce you to all of the core concepts.