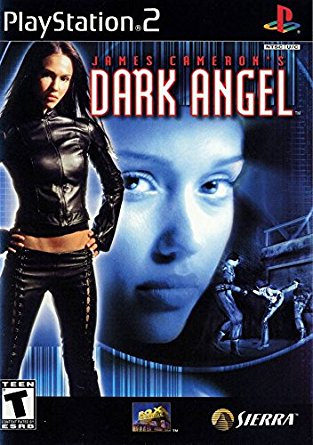 It’s time to look at a PS2 movie tie-in to a TV series that I never actually got around to watching. It seems like a cool premise though. It’s basically Maximum Ride but taking place in a futuristic setting. I can get behind that. The actual game mixes stealth with the beat em up genre for interesting results. Honestly I think it would have certainly been sufficient to have just been a beat em up, but I suppose the stealth aspects make sense with the actual plot of the game.

So the story follows Max (You won’t be able to forget her name since it is mentioned a few times for every single level) as she wants to rescue the other people who was kidnapped by the I-Corporation and experimented on. Among those were her sisters. Max broke out (In the show I’m guessing) but now she must head back to face her fears once more. Logan helps her from the sidelines as he tries to shut off some security cameras here and there. He’s basically tech support and I suppose he does go into the field once in a while. Can Max really save her family?

One thing to note here is that in the future the government fell apart thanks to some kind of nuclear situation so now corporations run the world. I-Corp is one of those along with a second one that I’m forgetting. Both sides are evil and do experimentation so you have to decide who to root for. In this case we are going after I-Corp, but apparently Max destroyed a good chunk of the other side prior to the game so she has done a good job of taking out any corporation that stands against her.

The gameplay is very straight forward when it comes to combat. You can punch, kick, and throw. Jumping is also useful even if the jump isn’t very high. You can run and then jump+kick to unleash a devastating tackle that will knock any opponent over. This is really useful for when a bunch of enemies are after you as they have no real counter to this. If you don’t mind taking a little while you can bear all of the enemies this way. To prevent you from cheesing the game for each level though, some will have a time limit for which you can beat the enemies. Just keep mixing up your punches and kicks to resist enemy throws and you’ll be okay. Whenever possible I would ignore the stealth option and just barrel into groups of enemies. Some groups I just barely beat with 1 second left, but that’s the kind of intensity that you want to see. Also, I didn’t quite understand the stealth part for a little while since the game never explains it.

Basically if you crouch from behind an enemy and attempt to throw them it will result in a one hit KO. This is really useful if there are a bunch of enemies. You can take them all out one at a time this way. Otherwise if you just attack one then every enemy in the room will rush at you which can be around 6 and they can take a lot of health out of you if you aren’t careful. 2 of the last levels mix this formula up a bit though as stealth isn’t optional. If you are spotted then you are sent back to the very beginning. These levels can be a little on the long side so I can definitely confirm that it’s in your best interest to proceed with caution. A good technique for mixing the enemies up is just randomly jumping and then running off to hide. It will change their current pattern into one that may be easier. Of course it could get harder so proceed with caution.

To help in your stealth missions you are given some stealth gun ammo. This is a one hit KO to any opponent so it’s a good way to cheese these stealth missions. It is a tactical gamble though as you don’t get a whole lot of ammo. I believe you get around 20 shots for the duration of the game or something like that. Use your ammo wisely. I had already spent all of mine before the last big stealth mission, but I’d say that I did a good job of making it last when you consider how many levels there are. You also have other gadgets like a walkie talkie to lure the enemies closer and health packs which are self explanatory. As with many stealth games you just want to make these items really count.

As far as the characters go, we have a good cast here. Max is definitely a great main character. All of her dialogue is basically mocking all of the minions as she beats them up. She certainly isn’t above hitting someone who’s down as we even see that in a cutscene near the end so it isn’t just gameplay mechanics. She’s had a tough past but has definitely gotten past it and turned into a good hero. Logan is all right. I’m not a fan, but I guess he is useful. I can’t say much about the sisters as they don’t appear until near the end, but Beka was cool. She’s probably the best character after Max. She can certainly fight pretty well too.

The graphics look pretty sharp. A good amount of budget probably went into the cutscenes as they are full cinematics so no text cop outs. I mean, you get a text cutscene at the beginning of each level as well, but so long as you get both that isn’t an issue. The visuals are quite nice and I just wish we could have gotten more outdoor levels as towards the end they all feel a little cramped. The game had reasonable variety though. The soundtrack is definitely pretty solid. A little on the generic side, but nonetheless the combat themes were quite fast and really suck you into the moment. It makes the battles more fun.

There is no real replay value here though. There’s no level select and no collectibles to acquire. Basically once you complete the game that is it for your adventure. You have no more reason to play at all. With 22 levels I’d say that this game should last you around 4-5 hours. It will depend on how long some of the tougher levels take you as one took me around an hour before I finally had it beat. It’s no walk in the park and the game’s difficulty is pretty fair. It’s just enough to make you try but not too crazy either.

Overall, Dark Angel is definitely a fun game. The TV show definitely sounds pretty interesting if it’s like that. Max is basically a super soldier after all so that should make for some good action scenes. Hopefully the special effects were on point for that. Considering that I got the game for a few bucks I would say that this was a bargain. If you are looking for a quality action game to get for cheap then this is definitely the one for you. It’s just such a solid action game. Who knows, maybe it’ll get a sequel someday.