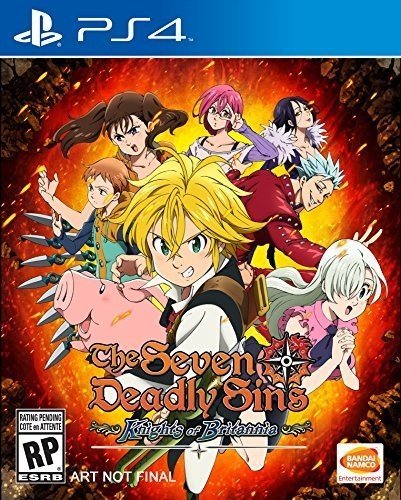 Time to look at another game. This time the title in question is Seven Deadly Sins. This game is based on a manga that I have to give a hard thumbs down. Still, I figured that the game wouldn’t have the same issues that the manga has and it is a 3D action game with a duel mode so you can’t go wrong there. It’s definitely fun and while the gameplay does not feel quite as polished as other similar games it gets the job done.

The game starts with the princess of a corrupt kingdom escaping and deciding to seek out the legendary Seven Deadly Sins to help her reclaim it. The problem is that they have been lost to the world for many years. Elizabeth manages to find the leader who is currently operating a tavern and decides to stick with him to find the others. Fortunately he is looking for the others as well so this works out quite nicely. Their opponents are the legendary Holy Knights who have been tainted with power and corruption.

The gameplay is pretty much how you would imagine it. There are less enemies than usual so calling it more of an action title than a beat em up seems pretty fitting. Naturally then the duel mode plays out more like a traditional fighting game. Each character has their normal attacks and power moves. Additionally they can use various super attacks and a final smash of sorts. Using these techniques at the right time will be the difference between victory and defeat. The game can get slightly challenging towards the end but never to the point where you will be stuck for any long period of time. At most you may just lose once or twice.

This is probably the first 3D styled game like this where some of the characters aren’t all that fun to play though. Most of them are good with their traditional attacks, strengths and weaknesses. However, a few characters just seem so bad and rigid that it’s hard to see yourself wanting to play as them. King is a good example of this. He can’t fight up close and is purely a long range fighter. His attacks all use up energy meter as well so sometimes you’ll have to resort to running and hiding until your energy gets back. You can see how this would get old. Fortunately you only have to actually play as him 2-3 times. I’m sure he has some kind of strengths to offset such a massive weakness, but I couldn’t find it. While simpler than other fighting games, you’ll still get to engage in a lot of fun brawls.

The graphics look pretty good. This style has worked pretty well for the various anime fighters. It does a good job of keeping each character model detailed and the game is easy to see at a glance. In particular the ultimate attacks are always fun to see. The soundtrack is on the repetitive side, but fortunately the tunes are quite solid. The danger tune is on point and helps to amp up the tension.

The actual story is fairly short at around 4 hours but there is a good amount of replay value to be had. First of all there is multiplayer mode which always adds in a whole lot to do. There are a reasonable amount of characters to keep the matches fresh and inventive. For single player content the game ends once you have assembled 6 of the deadly sins. As you can imagine there is a 7th one hiding somewhere. To get him and 100% the story you have to go through the various taverns and complete the bonus missions. They’re all very quick so these missions won’t feel tedious. It’s a good way of extending the game and as I mentioned in my tank review, it’s the right way to extend it. Lock some good bonus content behind the extra stuff, just don’t keep the story imprisoned. I could see myself going back to complete these missions at some point in the future, even if just to get some more characters to fight with since I’m currently missing a few.

Overall, Seven Deadly Sins is a pretty fun game. It hits all of the right notes and has a great balance of gameplay and technical merits helping it along. The game’s layout is very simple, as is the world map. Initially I thought the rumor system was rather pointless but as it is just a fancy way of saying that you unlock new levels as you beat old ones I suppose I can get behind that. Might as well differentiate your game a bit right? I’d definitely recommend giving this game a shot. It has a lot going for it and at the end of the day there’s just a lot to like here. Even the main characters here are a lot more likable than in the actual manga so the game did a really good job of bringing out the best in everyone.