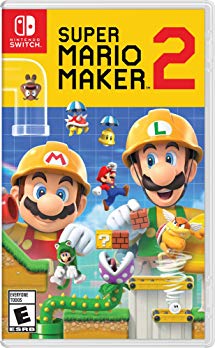 It’s finally time to take a look at the new Mario Maker game. The first one I still have listed as one of the greatest Mario games of all time. Mario’s tackled many different genres and for the most part they have obvious #1 titles. The best 3D Mario is 64, the best Mario sports title is Strikers, the best racing game is Double Dash, and the best 2D is Super Mario World. The question is…where does Maker fit into all of this? It’s basically its own genre, but it can hold its own all the same. Ultimately I wouldn’t say it is quite as good as the first Maker, but it’s very close and is definitely a game with tons of replay value.

This time around we do have a real story mode, but only barely since there aren’t really any cutscenes. There isn’t much of a plot either but I am still glad that Nintendo at least made the attempt and gave us something. They definitely could have gone the lazy route and just not included it. We did get some quality levels as well and it is a good way to learn all the mechanics of the game. By the time you’re done with the story you’ll be ready to tackle the others modes. A new addition to the game is the ability to fight other players online. The 4 of you are thrown into a level and the first to clear it wins. If you die in the level then you’ll be taken back to the start or the checkpoint. These segments can be a bit laggy at times, but for the most part it works well.

There is also the classic course world from the previous games. You can play new and popular levels while honing your own skills. Try to grab some world records while you’re at it. You can sort through the levels a bunch of different ways or even look up specific levels from the course ID. There are endless levels to have fun with here so there’s no reason to stop playing. Unfortunately the star system is gone and in its place is a more simplified like/dislike button system. It doesn’t really let you see how the stage is doing quite as well, but that was a pretty minor part of the process anyway.

As this is Super Mario Maker a big chunk of your time will likely be spent on making levels as well. I mean, it varies I suppose, but I imagine that for most people this would have been the main reason to get the game right? There have been new items and enemies added so the sky is the limit on what you can make. The stage builder is incredibly detailed and there are almost too many options. You can’t even fit everything on one screen so to find more items you have to go through a settings window. It’s all pretty intuitive once you start though with two exceptions. You can’t draw on the screen with a pen so you have to do it by hand which is a little tricky. There also doesn’t seem to be a way to zoom out and that would be handy. I actually feel like making levels in Mario Maker 1 was a little easier, but maybe that’s just my memory playing tricks on me.

As of the time of this review I have completed two stages and am in the process of uploading a third. In this game you can only upload 32 stages instead of 100 like in the last one so you don’t want to use up all of your slots too soon anyway. I don’t think I would get over that amount anyway so 32 isn’t a bad limit for me, but it is a pretty disheartening change for the more experienced makers of the game. So, as you can see Maker added a lot of improvements, but also slid backwards a little bit. I think the main part that is disappointing is how they got rid of all the extra characters here. It was awesome getting to play as characters like Daisy and Mega Man. It was also fun to try and collect them all as it added a lot more end game content as opposed to simply going around and playing all of the levels. It gave the game more of a focus and it’s just a shame that it is gone.

Naturally the graphics are definitely pretty solid here. All of the styles look good and Nintendo never cuts corners in this area. The soundtrack is pretty limited, but the tunes all sound pretty good so that’s not really an issue. On a technical level this game is quite sound and the fact that you can spam your levels with a ton of objects is also impressive. You don’t run out of space in a level for a verrrrrry long time. That’s something that other stage builder games still have a lot of trouble with.

There’s definitely a lot of replay value to be found here. Really the game never quite has to end. I’ll have to put it back to sharing game time with other titles now that the story is over, but I’ll still be playing it a little every day for a while. It doesn’t quite have the full array of content that the first game had to keep you going, but so long as you like the classic Mario gameplay then there’s no reason to stop playing. Also there are little medals and achievements built into the game this time around so that’s something to focus on. I imagine that getting all of the medals will take a very long time.

Overall, Super Mario Maker 2 is definitely one of the definitive Mario games. It’s the kind of title that can last you throughout the whole life of the Switch. You’ll be able to just keep playing it over and over again. At this point Nintendo can’t really release another big 2D Mario game since there isn’t much of a point when you can make all of the levels here. That means they’ll need to either come up with a cinematic story or stick to the 3D Mario games. Either way the mascot is in good hands right now as he isn’t leaving the limelight anytime soon. I wonder what this game will do for paid DLC. Maybe they’ll add a new style or more objects for maker mode.