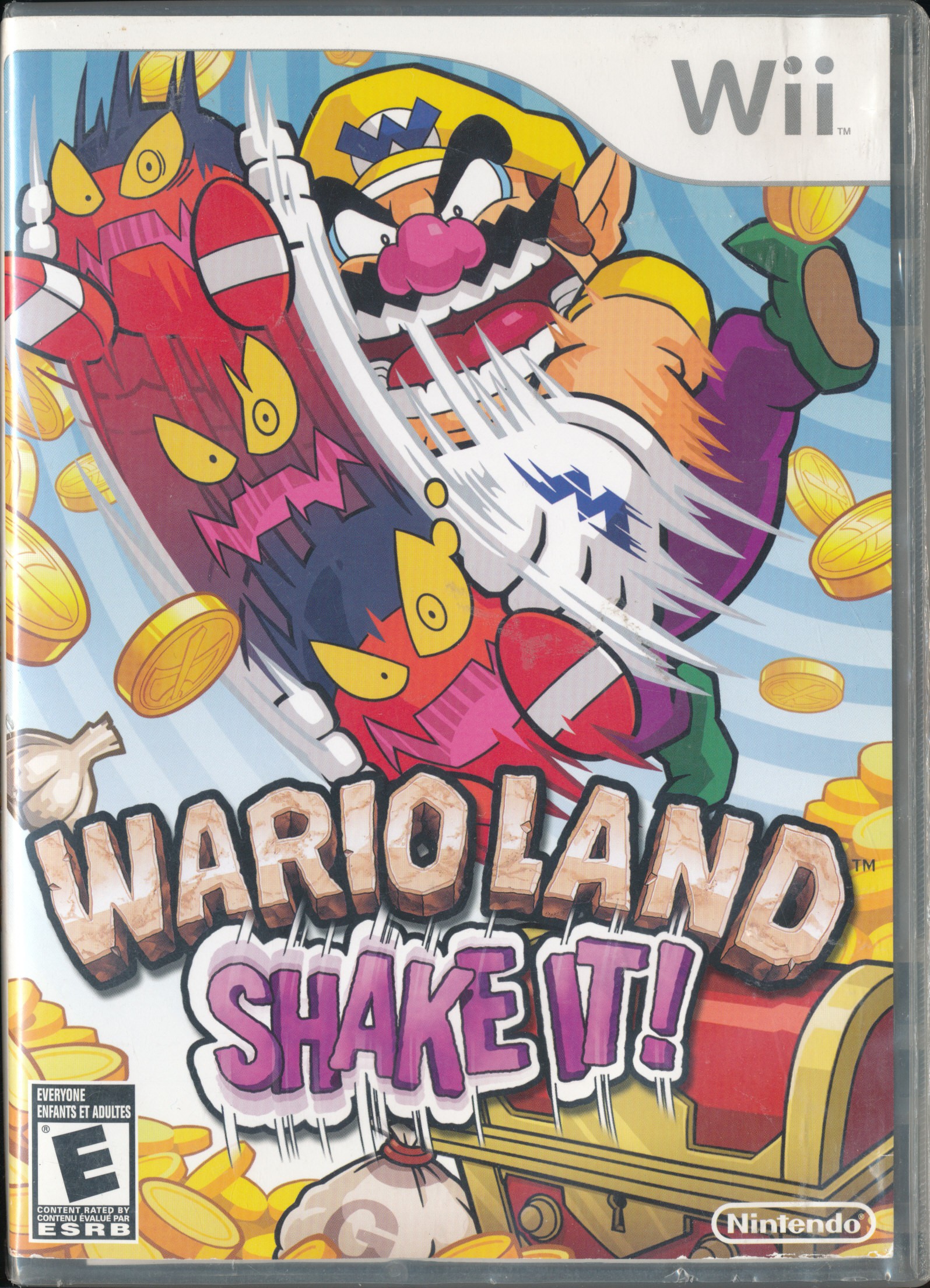 It’s time to take a look at a Wario game that I hadn’t gotten around to purchasing until very recently. It’s always nice to see him take the center stage. While Mario is certainly the more heroic character, Wario’s definitely a guy that doesn’t let everyone push him around. He just goes at the villains with all he’s got and makes for an entertaining lead. Shake It is a solid game that is slightly held back by the treasure mechanic, but does bring a breath of fresh air into the usual Nintendo platformer.

The basic plot is that a mysterious pirate has kidnapped a bunch of fairies. One of them manages to escape and convinces Wario to help in exchange for a bunch of treasurer. The fairy also heads to a local pirate for help as well and she decides to come along. Can this trio really stop such a powerful adversary or are their stories about to come to an abrupt end here? Only time will tell, but this could get dangerous.

The gameplay has your usual end goal. You have to get to the end of the level only that’s not where the level stops this time. You have to free the fairy there and then dash back to the beginning of the level with a 2-3 minute time limit. If you don’t make it then you’ll have lost. You get to keep whatever treasure you grabbed on the way to the start. You have a few different control options like the usual jumping and ground pounding, but also new ones like slamming into opponents or throwing them at obstacles. You’ll get the hang of these controls pretty quick and from there on it’s just a matter of plunging through.

Each world has 4 levels and there are 5 worlds here. You may think this sounds extremely short right? Well, it’s not a particularly long game, but it’s almost as long as the usual platformer. (Most platformers are around 6-7 hours) I’d put this game in at 5 hours personally. Each level won’t take you longer than a few minutes. So you may wonder why you can’t just beat this game in 2-3 hours or something right? Well, the game forces you to collect a ton of treasure in order to unlock each world. You’ll need 200K for World 5, 150K for World 4, etc. It’s around 700K in total I believe. I usually got around 20-30K per level so I only had to do a little grinding for the final world. If I didn’t have to worry about treasure I could beat the levels way sooner. As if the mock you each level has a very direct route from start to finish. However, if you want to get the treasure you’ll have to go through a bunch of alternate paths to get at it. The levels don’t become super long or anything like that, but you do realize the time you’re wasting throughout.

I’ve never been a big fan of forced items. I don’t like the idea of the game telling me how I have to play it because you are effectively being penalized for blasting through the game. As a bit of a speed runner myself I like conquering the games and just showing them what’s up. I can’t do that if the game is holding my hand the whole time and taking me down the various paths. Since the game does show enough restraint not to make the counts too obsessive it doesn’t hurt much, but it just limits the game from being quite as fun as it could have been. At least its upfront about how much treasure you’ll need for each world at the beginning so you can plan it out as you’re going through the game.

The graphics here are definitely really good. I was also impressed that we got a full opening anime movie to start the game off with and one at the end as well. Why does Wario get all this fanfare rather than Mario who is supposed to be the company’s mascot? It doesn’t make any sense to me and I was thinking about it for quite a long while. I’m sure there is some rationale to this and I’m thinking it’s that Nintendo can experiment more with Wario, but I’d love this treatment for the next big Mario platformer. The soundtrack for Shake It! isn’t quite as impressive as in Yoshi or Mario, but it’s a decent array of songs. None of them really stood out to me though.

Then we have the bosses which are pretty inspired. One of the final ones does get a little cheesy with the only way to beat it being a move that you were never formally taught to do in this situation. Ignoring that, all of the bosses have unique designs and ways to defeat them. There are no recycled fights like you would see in most of Nintendo’s other big games. In part this is because each world only has 1 boss instead of 2 and I think that makes sense to keep each fight fresh. They’re all a lot of fun, but the best boss has to be the final one. Not only does he have a proper two phases like a Mega Man villain, but his design and moveset are really something special. The guy can fire off giant energy blasts and makes it look easy. Additionally he just feels like a final boss. The guy has his own throne. I’d love to see him make a comeback at some point. He’s one of the few Nintendo villains I’ve seen who is played completely straight. He has no comedy moments to speak of.

There’s a good amount of replay value here after beating the game. You can work to find all of the treasure chests or even complete all of the bonus missions. Then with that treasure you can buy some extra heart containers or the opening movie to re-watch at your leisure. I don’t think the game will still last for much longer after all of this, but it’s a fair amount of content that really helps justify the price even further. The game goes for around 15-20 nowadays which is a fair price in my opinion. It’s rare that Wario gets his own game so I’m glad Nintendo put some real effort into it.

Overall, Wario Land Shake It! is a pretty fun game. It was more enjoyable than I expected as the motion controls were actually handled well here. You don’t use them much at all except for aiming and it was pretty responsive. Wario makes for a fun lead and the game just feels very unique. It can’t be compared to Nintendo’s other titles so easily. Hopefully we get a new Wario Land game at some point, I think there is still a lot that can be done with it. I also think Nintendo should consider a crossover game someday with Mario, Yoshi, DK, and Wario mixing and matching all 4 of the styles. That would have the potential to be Nintendo’s best platformer yet!