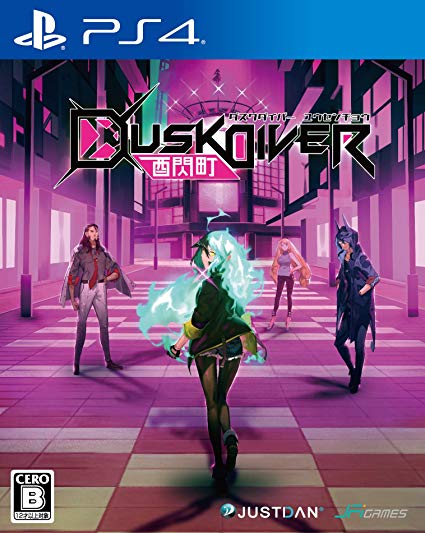 It’s time to look at a game that I hadn’t heard of before receiving for Christmas. From the aesthetic and cover right away you get that anime vibe which is always good. I tend to get more excited for games like this with a colorful art style and lots of cinematics. Usually these games are on the long side, but surprisingly this one is only around 6 hours or so. I nearly beat the whole thing on New Year’s, but the final hour took one last batch to complete. It’s definitely a great game with a solid post game plan.

The game focuses on the lead character Yuma who suddenly finds herself in a world filled with monsters one day. She is able to transform into a Super Saiyan type fighter and with the help of a cat defeats them. We then learn that there is another world that exists parallel to the human world and there are a few deities who fight them off every day. Somehow Yuma was thrown into this world and now the deities are unable to transform back into their true forms while she is around. Until they figure out a way around this Yuma will need to do the fighting for them. She agrees to do this while she’s on summer vacation, but once she has to go back to school that’ll be it for their agreement. The monster incursions have started happening more frequently and with greater intensity though so Yuma is going to have to bring her A game to this.

Just judging from the general plot and the huge hub world I’m still surprised that the game is so short. It just feels like we could have had a few more chapters thrown in. It’s better for the game to be direct and end early rather than forcing a long length on us though. As I mentioned earlier there is a lot to do after you beat the game anyway. You can train up your partners and work on getting all of the PS4 trophies. This should take you a long time to accomplish so that’s always something to consider. I didn’t even get to visit a fraction of the shops or learn just about any new skills during the game. I just focused on maxing out my attack power and taking it from there.

Lets talk about the gameplay though. This is your classic 3D beat em up. Each chapter starts with a few conversations with the deities and then you go to the other world through a dimensional rift. The only way to enter these rifts is to have some dragon scales with you so be sure to grab them when the Boss tells you that she senses one. Typically she says that once per chapter and to enter a rift that’s usually all you’ll need. There were 2-3 times where I needed to grab 5 or so, but running around the hub world and getting them doesn’t take up much time. It does make me think that this whole gimmick was rather pointless, but I’m thinking the developers really wanted to show off the town and figured you may not check it out otherwise. It’s probably true, but I still don’t like forced collectibles. It’s not nearly as intrusive as in platformers though so it’s not a big deal here.

Once you’re in the other world then you turn into the blue flame haired Yang Yuma. You’ve got your standard power attacks, standard moves, and a summon which brings out a guardian to land a quick combo. It’s like an assist in a Capcom Vs title as they’ll quickly go back into the air until you summon them again. It takes a block of energy but they do a lot of damage so it’s usually worth it. The big incentive with these guys is they chip away at an enemy’s armor really quick which is very handy. I always use them to get rid of the enemy’s armor and then finish the opponent with my final smash. It takes 3 bars, but does a ton of damage. Even bosses tend to lose a full bar of health if you’ve destroyed their armor. The armor regenerates quickly so be sure to smash it entirely before going for damage to save time. It’s a good tactic and I should know because I S ranked all of the missions except for 1. (Got an A….)

When you have enough super meter you can also transform into a magical girl. I was surprised that we got 2 different super forms here, but it’s fun enough. All of your stats greatly increase and you also get another super attack. For some reason it’s weaker than your normal one, but still fun to have. The main value here is just in your normal attacks getting so much stronger. You can really just rely on them to an extent although the form doesn’t last very long.

The game’s only fault may be that some parts aren’t super polished. At times when you click on X to get the next text to come through it won’t work so you have to click again. There are also a lot of typos in the text so I don’t think anyone actually reviewed it. Some people are pretty big grammar sticklers so they wouldn’t like that, but it doesn’t really bother me. It would have been an easy fix, but it’s mostly just letters left out here and there or ones that are close to each other like a v instead of a b.

As for the game’s cast, it’s fairly compact. There are a few deities with Leo being the main one. He’s a good coach type character who is always around to help Yuma out. Leo and Boss tend to keep way too many secrets though. I don’t see why they didn’t come clean with Yuma from the start as it would have saved them a lot of trouble. The other two deities are pretty good even if they never get quite as much to do. Running into the villain base was definitely not their smartest decision though.

Then you’ve got Yuma who is a really fun lead. She tends to take everything in stride which is good. She’s not the type to panic or question every little thing that happens in the monster world. For her it’s just another job. I’m glad she was the lead and not her friend. Her friend seems pretty pointless in the game as she just shows up for free food now and again and also tends to faint a lot. I suppose you need a friend like that to make the main character look even better, but Yuma was already solid so I don’t think she really even needed the help. Finally you’ve got the little girl who shows up near the end. She’s a fun character although if you’ve played Crystar then you probably already know how her character arc is going to go. She’s a good example of a quirky character who doesn’t go over the top and so manages to be a fun character to have around.

The graphics here are definitely really nice. The town looks vibrant and the same can be said for the gameplay. The level and character designs are on point and there’s just a lot of color here. You’ll know you’re playing a PS4 game right away. Then you’ve also got a pretty nice soundtrack. It’s very fast paced to the point where even Yuma’s ringtone is a battle song. Then you’ve got an anime opening type track which plays sparingly during the game as well. There are certainly no complaints here.

Overall, Dusk Diver is a fun game. I can’t really say that I had any complaints with it. Buying the game at full price may cause you to be a little upset at the length, but otherwise it’s not short enough where I’d feel like I was ripped off. By the time you get all of the trophies you’ll likely have been here for quite a while as well. I’d definitely recommend buying this game. Odds are that you probably haven’t heard of it before now either so the more people that play the game the better. Maybe that way people will start spreading the word. If the game ever gets a sequel them I’d definitely be up for that.