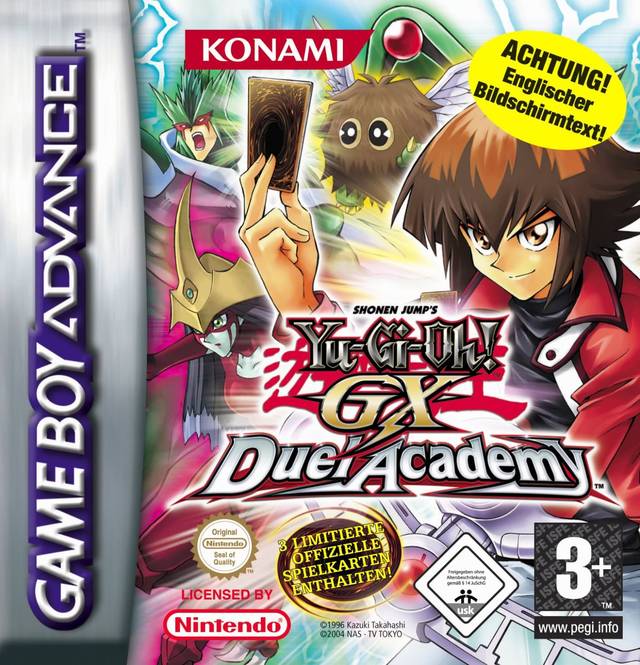 It’s time to look at another game that uses the dreaded day system. I still cannot fathom why games would ever choose to use such a system. All it does is force you to miss out on huge amounts of the game so it’s like the developers are wasting their time adding a bunch of features that we’ll never get to use. The core Yugioh gameplay is still good which keeps this from being a negative game in the end, but it is heavily limited.

The story (albeit it there isn’t much of a story here) is about a new kid who has arrived at Duel Academy. He’s looking to perfect his craft and become one of the greatest duelists of all time. It’ll take a lot of semesters and training to do it, but practice makes perfect. That’s the extent of the game. Every few months you get to take an exam to try and rank up, but the questions are surprisingly tricky. I did well enough in the dueling part…I actually had a positive record. The problem is that if you don’t do very well in the written exam you go down in rank anyway. I thought this was a bit iffy, but I suppose it is what it is. After a bunch of duels and weeks went by I figured it was time for the review.

In terms of gameplay it’s the usual Yugioh rules that you should be familiar with. In every turn you get to summon a monster and play some spells or traps. The goal of the game is to get your opponent’s life points down from 8000 to 0. Once you do that you will have won the game and you get to duel the next person. Everyone’s always got a bunch of trap cards to play so you want to work around those. For example, always attack with the weakest monster first and if you have more than 1, put the others in defense mode. That way when Mirror Force is played you won’t lose all of your monsters. As you play more and more duels you’ll see why it’s very important to protect your backup monsters. Each day seems to have 3 segments so you can plan out quite a few duels per day. You then get to watch the week days go by with nothing happening except a chance to buy some cards at the shop. Then you go back to fighting off more duelists.

One thing that slows down the duels here though is the fact that the characters like to talk a lot. It’s an interesting idea but I think it should be done without interrupting the flow. I suppose voice acting would have been out of the question for a GBA game, but maybe have everyone talk as an intro instead of during the duel. I believe that would allow you to really get in on the dueling and not have to worry about the rest. I was pretty satisfied with my starter deck though. It had a lot of fun fire monsters that I always like to have along with some good traps and spells. I made a few modifications here and there, but mainly kept it in tact.

When it comes to the graphics I’d say that the game was pretty solid. you could always tell what was happening and the illustrations were nice. The dueling effects were good and we got a nice amount of backdrops. The soundtrack is also pretty good. It’s not quite ready to take on the GX anime ost or anything like that, but it has actual variety which is important since you’ll be dueling quite a lot.

This game’s got a long amount of time if you want to truly complete the game. It’s hard to say exactly what beating the game entails but I imagine you would need to conquer all of the exams and reach Blue Rank. Assuming you have a great deck and don’t mind restarting the game during exams a few times maybe you would clear this game in around 20 hours or so. Technically there is a ton of replay value to be had here as well. Obtaining all of the cards feels like it would probably take a life time to achieve. Furthermore you’ve got to abide by the day system so you can’t just go to the shop whenever you feel like it.

It really all comes back to that system. Not to be repetitive, but I don’t like having the game force me to only be able to do certain tasks at specific times. I like being able to choose what to do next. While games don’t have to be linear I also like to have a concrete goal so I know exactly what I am supposed to do and when I am supposed to do it. Things like that really go a long way in my eyes. I prefer the retro Yugioh style where it used to be that you would fight 5 duelists, beat all of them 5 times to unlock the next row and then rinse/repeat the system. At least that way you always knew you were making progress.

Overall, This is one of the weakest Yugioh games. It’s a shame because I love GX and really wanted it to have a solid game to fall back on. Unfortunately this is not the game to do that. Tag Force would end up being a better option to represent GX. This one feels more like a cash-in and there is little that it can offer in place of other titles. I would highly recommend getting one of the World Championship games instead like 2006 which is still my favorite one. Those have more direct goals and the gameplay is completely streamlined. That’s all I really need in my Yugioh games and then I’m a happy camper.