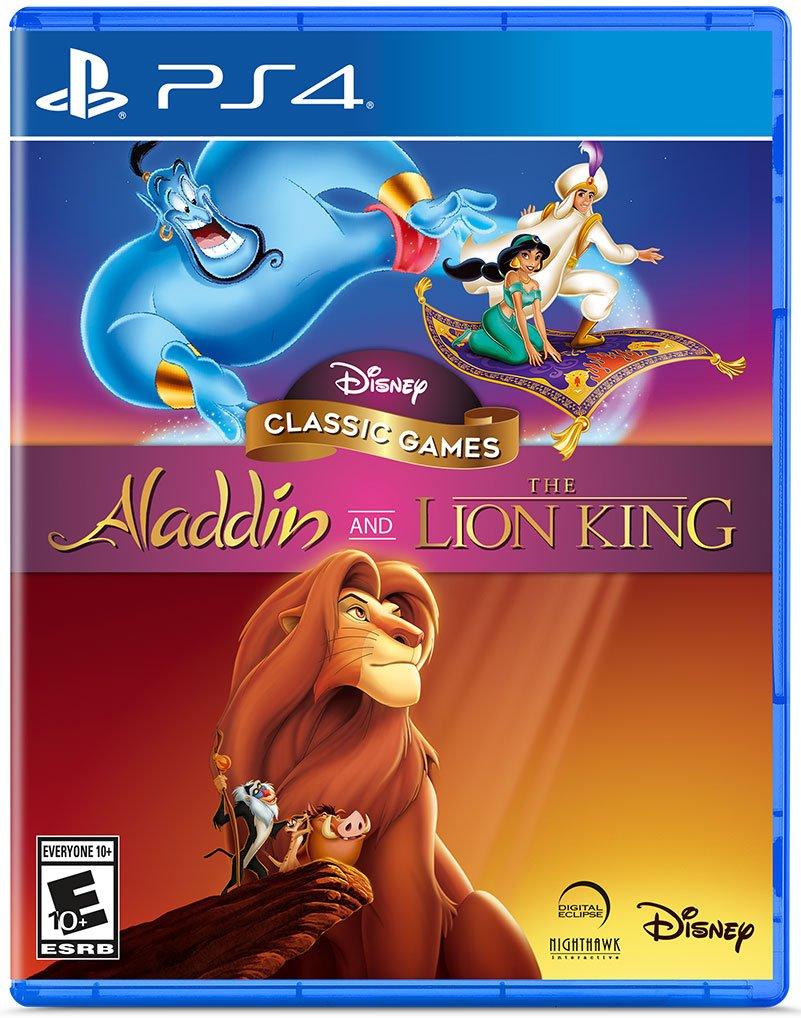 It’s time to look at a recent HD collection which brought two Disney games from a while back. I’m sure you know these two games or at least heard of them when they first came out. They were not very accessible until this remake came out though so you had to hope that you had one of the older consoles. Otherwise you would need to settle for online videos of the game. Aladdin was a lot of fun back in the day so it was nostalgic to play it again. I can definitely see how I got stuck in the fire level because that one is still pretty insane. This is a quality collection to check out.

First let’s talk about the Aladdin game since that’s the one I have nostalgia for. It follows the movie’s plot naturally and the gameplay is that of a 2D platformer. You run and jump across obstacles as you slay enemies and reach the finish line. The gameplay is pretty smooth so you don’t have to worry about glitches. If anything the difficult part is that you move very fast so a lot of the time you may run into enemies. It can also be hard to defeat them without taking damage so as the level goes on you may end up dying a lot.

It’s a pretty short game so you should have it beat in around an hour or so. The toughest level is definitely still the fire cave. In that level you ride the carpet and have to move up and down to avoid obstacles. The tough part here is aside from how fast the obstacles show up after the warning, towards the end there are one or two obstacles that don’t have a warning. It doesn’t really feel like you have much of a chance outside of luck to beat the level on your first shot. Eventually you can memorize where the obstacles will be though but without the handy save feature that we have in this collection it would still be incredibly difficult to clear this level. Ultimately you could do it with practice and determination, but it would not be a cake walk.

Then you’ve got the Lion King which is also pretty difficult. In this game the platforming is what will take some time to get used to. There is a lot of climbing and jumping across enemies involved which has to be done quite precisely or you are out of luck. The second level took me the longest to beat because I just kept dying before I would make it past all of the jumps. The other really tough level is the maze near the end of the game where there are a bunch of tunnels and you have to pick the right one. Each time you choose the wrong one the enemies all re-spawn and you have to take them all down win order to win.

The final boss is definitely a lot of fun as Mufasa really gets a lot of props. You’ve got a thunderstorm in the background for dramatic effect and the background is even on fire. Mufasa also puts up a really good fight. I was landing blows on him for a long time before I realized that there had to be some kind of trick to this. After button mashing for a bit I found out you could flip Mufasa so the trick is to jump him over the cliff. If you do that then you end the fight and claim ultimate victory.

Both of the games are pretty short when it comes to length. Each one is about an hour or two so you should have the collection done in about 4 hours I’d say. It’ll depend on if you use the new features or not. The game added a new save feature that you can use after each level which is definitely handy. Alternatively you now have a rewind feature which you can use whenever you die. With this feature there is no challenge too difficult to overcome since you can just keep redoing your actions until you pick the right one. It’s a nice quality of life upgrade and I’m always game for this feature to be around.

In terms of replay value there isn’t much inside of the actual games but the collection does give you other methods for playing them. You can play different versions of the game like the console port, game boy port, arcade edition, etc. both games have several versions to choose from which is pretty cool. It may not be extra levels but it should make the experience a little different so you have more reason to replay the game. You can also aim to get all of the PS4 trophies in the game as well.

The graphics for both of the games are pretty solid. It’s nostalgic to see the old sprites and the artwork does a good job of resembling the actual backgrounds of the movies, there was certainly a lot of effort put into this part. The cutscenes also used illustrations to get the story across. As for the soundtrack, both games went for music that would be fitting in the setting. Neither ost is super memorable or anything like that, but they work well during gameplay.

Overall, This is a fun double pack for all to enjoy. It’s a pretty difficult pair of games to try and complete if you don’t use the new features in game. I at least recommend the save feature between levels even if you don’t want to use the rewind button. The difficulty also helps to extend the overall game length since it is unlikely you will be able to beat the levels on your first shot. Perhaps if you go really slowly but I always like just charging into the fray and taking names. Now that they’ve been remade it’s time for a AAA sequel to one of these. I’d vote for Aladdin since there’s a lot you can do with a 3D adventure through Agrabah.