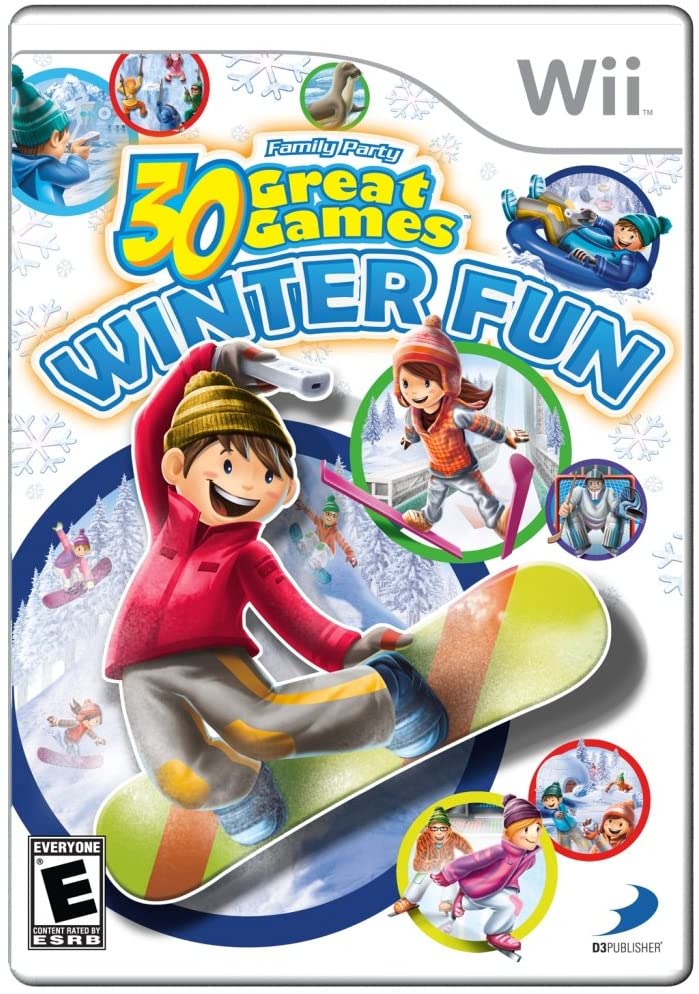 It’s time to look at the latest installment in the 30 Great Games series. The franchise has definitely not been known for its high quality standards or anything like that but when I see it in stores I can’t help but give it a shot. Party games are just nice to give a look at even if you know they won’t be very good. This game clearly had some effort put into it but being on the Wii didn’t help matters. The motion controls are just terrible heavily hold the title back. Even the games with the best of ideas ultimately aren’t able to do anything to save themselves.

When you get into the game you can see right away that there aren’t a lot of options. I’ll just defend the game here as in a party game you really only need two options, a main party mode and a minigame mode with friends. This title has both of those so it doesn’t technically need any more than that. So long as the games are fun then this isn’t a problem. There are 5 worlds and each one has 6 games. The idea is to clear them all and you will have played 30 “great” games. That’s not a bad approach right? Well, the game fumbles the ball on the execution a bit. How it should work is you just beat all of the worlds one at a time. Instead the game has you replay them.

When you first enter a world it only has 5 games. You have to complete the world once and then complete it a second time to play the 6th game. When you beat the first 3 worlds twice then you unlock the next world and the games that accompany it. This is an awful lot of replaying for a game like this though. You really just want to go through the worlds once. It’s better than in another Wii party game I played though where they had a bunch of different worlds but they kept re-using the minigames to pad out the length. This is still better than that.

The game has a winter theme so naturally all of the games follow that path as well. They can be pretty similar but I’ll quickly mention some of the games that weren’t that bad. One that I enjoyed was trying to climb down a mountain. The idea is you let go of the rope and free fall for a few seconds but then you have to grab again or you’ll plummet to your doom and waste a lot of time. If you land on ice that will also waste some time. Then you’re got a minigame where you have to try and sink your claws into the mountain as close to the edge as possible without falling over. It’s pretty fun to see how close you can get. We even get a Bomberman type game where you have to drill through and blow up some blocks as you try to get treasure. While I like the idea, I don’t like the fact that this game is 100% RNG. You never know if you’ll get treasure or a bear.

The worst games are easily the ones that have you racing. Whether you’re snowboarding down the trails or using skiis, these games just aren’t fun. They suffer the most from the motion controls. You’ll find yourself bumping into the edges quite a lot and the computers will just leave you in the dust. It’s no coincidence that the best games in the collection used minimal motion controls. I can’t stress enough that this could have actually been a pretty good game if it had been for a different console. Imagine it on the Gamecube with a solid set of controls. It actually might have been pretty fun because I did appreciate the creativity behind some of the games.

The graphics for the game aren’t honestly all that terrible. This looks like a reasonable party game if you just take a look at the graphics. The levels and minigames all appear very clear and the character models are good as well. I had no complaints in this area. The soundtrack on the other hand is basically nonexistent. I can’t think of a single theme in the game. They’re all very forgettable so hopefully you are too engaged in the activities to notice this too much.

In terms of replay value it will completely depend on how much you like the actual minigames. There are literally no other options for things to do outside of that. You just play the minigames and try your best to see why this game had potential. If the game were to explain its minigames better the first time around and didn’t use motion controls then this could be a very different review. Part of the problem that I didn’t go into earlier is aside from the minigames having terrible controls, the rules aren’t explained very well either. Usually you won’t win a minigame the first time around because you just aren’t really sure of how to play it.

As a little aside, the game did have a fun start though. Nobody could cross the goal in time so we timed out. Keep in mind that I was playing by myself so the other 3 players were A.I. and they couldn’t win either. I think that speaks to the overall game design because there’s no way that should ever happen. After that first level the A.I. went back to normal and started clobbering me though so it was a one time thing. I thought it was pretty funny though.

Overall, This is one title you should avoid. I wouldn’t say it’s the worst game in the series which is kind of sad in itself, but it’s just not a good game. Even though the going price is only around 2-5 dollars there is no reason to buy this game. There are far better titles to be obtained in the same genre or even in any other genre. You’d need to be really desperate to pull the trigger on this one and if you do just be prepared for those motion controls. Some of the games have good ideas at least. I think if you play this with a few friends with the intent to have fun it can certainly happen. Since this is a party game maybe it still ends up succeeding in its objective even if in an ironic way.