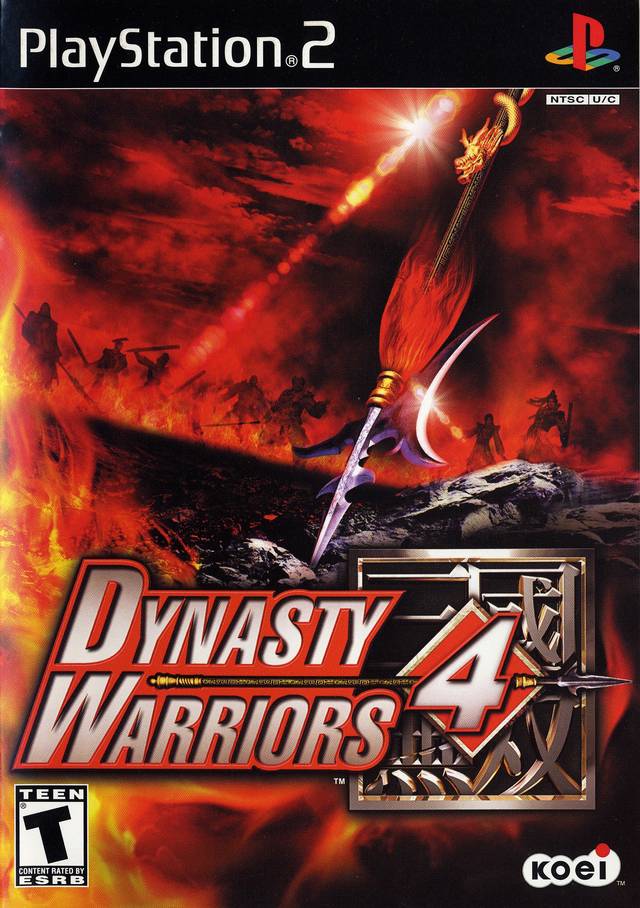 Time to take a look at the next Dynasty Warriors entry. I wouldn’t really say that it’s very different from 3 in this case. The graphics are about the same and the story is pretty similar too. In terms of changes from entry to entry I feel like the gap between 3 and 4 is probably one of the smallest that I’ve seen. It’s just as fun as the last game of course, but if you swapped them out it would be pretty hard to tell so I feel like this one came out really quickly after the last one in terms of development time.

So once again I went with the Wu faction to save China and unite everyone. The gameplay is completely unchanged from the last one with the core mechanics. It does seem like you know more of your super moves without leveling up this time which is handy. I also do like that you just have one weapon this time so you don’t have to worry about forgetting to equip it or something like that. That was one thing that could be tricky in 2 because it was hard to always be remembering something like that. This way you can focus on just getting into the action. You still have items to equip though and I recommend doing that since their extra stat boosts do help.

The levels try to have a little more variety in this game with new objectives. One of these is the “Find the Seal” level but the idea was better than the execution. This one took me almost the entire stage time not because of enemies but because the seal wouldn’t show up in any of the boxes. I broke over 80 and scoured the stage over and over but it just wouldn’t show up. It wasn’t really fun, but just tedious. Fortunately that level only showed up once and the rest were more standard. I much prefer just having to take down a bunch of enemies.

I gotta say that the final level really went all in though. It seemed like no matter which faction I tried to help I was left alone pretty early on. It was pretty thrilling in its own way though because the meter was all the way in the red meaning I had no support. I had to slowly encroach on their territory from all sides. There were many times where I thought I wasn’t going to make it, but I ultimately was able to survive. I got to test my skills under duress and they weren’t lacking. The computer A.I. in this game is pretty impressive. They don’t let you split them up very easily and even utilize traps of their own. You don’t want to underestimate these guys.

Even on the Easy difficulty this game could be pretty crazy. The final level is my proof of this but even the other levels would be difficult at times too. This is definitely not quite like any other Easy mode that I have experienced. This one is determined to give you a challenge under any level and I can definitely respect that. There is no easy walk in the park to be found here. My main gameplay advice here is to pick your battles carefully. Just because you can go into enemy territory and take all of the fighters down doesn’t mean that you should. If you leave your allies alone then they may end up getting crushed by the forces that remain. It may feel heroic to invade the enemy base but that’s why it’s so risky. Additionally in this game the enemy generals are a lot more likely to just gang up on you which makes them a lot more difficult to handle. At least one of them will probably block or parry your blow and then you’re in a bad spot.

There are also 1 on 1 duels in this game and I recommend turning them down. The enemies often have cheesy combos that take a lot of damage out of you and they also have access to potions. There’s no real reason to fight them except that your army will lose morale if you turn them down. On the flip side if you accept and lose then you get a game over so I really don’t think that the risk is worth the reward. It seems a little lopsided but maybe that’s just me.

On the graphical front the game looks good. As I mentioned it is basically the same as the last one. I liked 3’s graphics so I enjoyed 4’s as well. The soundtrack continues to bring us a lot of different rock themes so that was a lot of fun. These games are really super impressive with the tracks and I hope to see that continue in the newer games. Music is a big part of the gameplay experience after all and if I could ask for any enhancement it would just be to make the music a little louder during the actual gameplay. Amidst the sword swinging and yelling I really can’t hear the music and it may even stop during the levels. You really hear it a lot during the menus.

It goes without saying that the game has a lot of replay value. The main campaign will probably last you a few hours and then after that you can try beating the game with the other teams. Additionally you can max out all of the characters and get the items. It will take an extremely long amount of time to do all of that so you can really just keep playing the game until you get to the point where you are tired of the gameplay. When you couple that with the fact that the game goes for a very low price at this point then you’ve definitely got yourself quite the deal here.

Overall, Dynasty Warriors 4 is a fun beat em up game as with the last one. If you have enjoyed any of the previous DW games then you will definitely like this one. There’s really nothing to dislike here and everything to enjoy. It’s got a ton of content and solid gameplay so you can’t ask for much more. Right now I’m working on Dynasty Warriors 5 and that will end my little marathon. It’s pretty impressive how many installments this series has gone which really shows what a solid fanbase it has. The games have earned it with the solid gameplay over the years.