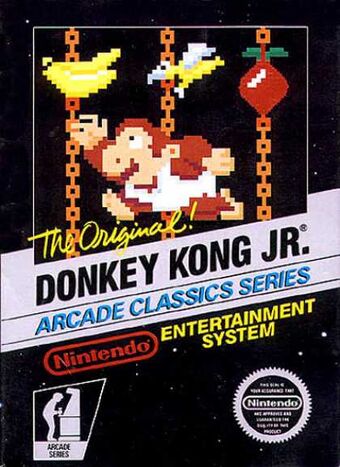 The first Donkey Kong was pretty fun so I was ready to jump into the second one. JR definitely switches up the gameplay quite a bit though. This one’s all about climbing and is a pretty nice change of pace. I actually thought it was a pretty solid sequel. It may not be as iconic or riveting as the first one, but it did a solid job of filling in its shoes. The game is over in the blink of an eye though since it only has 3-4 levels before it starts looping endlessly. That’s consistent with the first title though.

So the basic plot is that Mario has finally captured DK. It definitely took a lot of skill to do so and the hero is ready to call it a day. His plans end up changing though as Jr has arrived to rescue the former villain of the first game. Mario sends out a bunch of creatures to try and stop him, but Jr isn’t afraid of getting mixed up with a little action. He’s never backed down from a fight before and he certainly isn’t planning on starting now. The villains will have to watch out because Jr is definitely not playing around.

The gameplay here is pretty simple. You have to climb up the ladders until you reach Mario. You can move up and down as well as sideways as long as there is a vine there. You can’t touch any of the enemies of course so the idea is to always make sure you are going around them. You move a lot faster if you have one hand on each of the vines as opposed to totally being on one. This should help you breeze through the game a little easier. At the end of some levels you also have to bring some keys to the top and being on two ladders helps a lot since then you are bringing up 2 keys at once.

The gameplay doesn’t have any other wrinkles to it so you’ll master it within a few minutes. You can easily beat the game in under 15 minutes as well. So in terms of length this is definitely one of the shorter ones present. You can play it over again and again for replay value I suppose, but since the gameplay is so basic I doubt you’ll be doing that. It’s not quite as fun to replay over and over as something like Pac Man. There are less variables here and as a result that means there are less things to try. A lot of times you’ll just be clearing the levels in the same way over and over again which doesn’t provide much of an incentive to play through it some more.

The graphics are definitely really solid. Everything is very clear and this could pass off as an SNES game. Nintendo really didn’t hold back. The soundtrack is catchy enough as well even if it’s not very memorable. One thing Nintendo always kept in mind for a lot of these games was not to lose sight of the fun factor and that’s what helps keep Jr afloat. No matter what at least you know that you’ll be having a good amount of fun as you blast through this game.

Overall, Donkey Kong Jr is a pretty fun game. I liked the gameplay style and it all looks pretty high end for the console as Nintendo always tends to provide with their big games. The extremely short length is unfortunate but I suppose if you’re playing for score then you won’t really mind that too much. I’d definitely recommend giving it a try if you have the Switch Online service. It is free at that point anyway so it’s not like you’re really going to be sacrificing any cash to check it out right? I’ll be reviewing the Donkey Kong 3 game shortly which will be a nice way to end off the trilogy. Once that is over the NES games are also near their end. I’ve only got around 8 of them left although that isn’t counting the next 3 reviews which are already in progress.