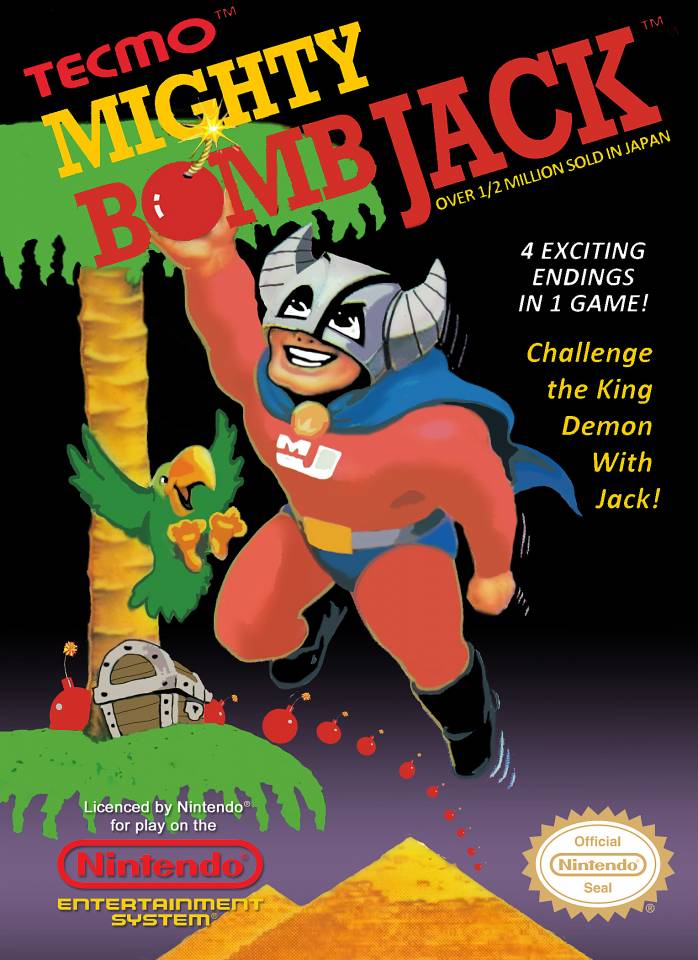 It’s time to take a look at the Mighty Bomb Jack! This game’s pretty interesting. It’s a very unique platformer and I like the gameplay style. There’s a bit of an iffy game design moment near the very end of the title but for the most part this game really doesn’t slow down the pace throughout the whole game. In a way I’d say the closest game I can think of as being like this one would be the Kirby titles since this guy can also float around for a while.

The basic premise of the game is that the King is captured so you need to save him. The levels are mainly long platforming types where you have to float to the end. Unlike Kirby you can’t increase your height once you jump, but by mashing the A button you can keep the same level of height for a pretty long time. When you get to the end of a level you’ll see a gate you can go through. If the gate isn’t open then that means that you will need to collect all of the bombs. This isn’t true for all levels but in some they do make sure you collect them all. You just have to touch the bombs which is easy enough. I tend to skip them unless the game forces me to grab the bombs though because otherwise I figure there is no real point to doing so right?

There are around 17-18 levels in the game which is a good amount for a NES game. I’d say that it’ll take you around an hour. The levels aren’t particularly long and some of them seem to reuse the level design so you’ll already know where to go. For a minute there I actually thought I was in a loop so I quickly had to look the game up online to make sure that wasn’t the case. Fortunately the game does have an ending. The only dicey level as I mentioned is the final one. So, you’ll blow up all of the balloons and will notice that the gate is still closed. Well, there are 3 completely invisible blocks you have to destroy in order to open the gate. There’s no way to tell where they are except to jump on every block which takes a while since you’ve got a ton of enemies on your tail. This is one of those games in which a single hit will meet your doom so confronting the enemies is pretty tricky.

After you do that there is an invisible block in the next room as well. Once you find that you enter the King’s chamber. To break him out you need to jump on the blocks above him a bunch of times. That was difficult to figure out. Initially I thought that I may need the powered up forms which would have meant my doom because there were none left. You can power up with some S tokens along the way but I never really grabbed any. So, the whole game is pretty straight forward except the climax. I don’t think the invisible blocks are very reasonable to be honest, especially since this is a factor that simply wasn’t present during the rest of the game. How is anyone possibly supposed to know where to go or what to do in that situation?

Still, the core gameplay is quite fun. I do like how high you can jump and your movement speed is also on point. The graphics here are very good as well. Everything is very bright and easy to understand right from the start. Additionally, the enemy designs are pretty inspired. The music is all right as well. The length may not be amazing but I’d say that it will do. According to the box art there are 4 endings as well although I’m not sure how to get the others. I got the standard ending I believe which is pretty simple. You grab the king and sink into the pyramid. I don’t imagine that the other endings would be much different but that is a complete assumption on my part.

Overall, Mighty Bomb Jack is a cool game and one of those gems under the rug. I doubt I would have ever come across it if not for the Switch Online. It was a good game to leave til near the end of the batch so I always had something to look forward to. If you like the Kirby games or platformers in general then I definitely recommend checking this one out. It’s a pretty fun experience and definitely a high quality way to spend an hour or so.