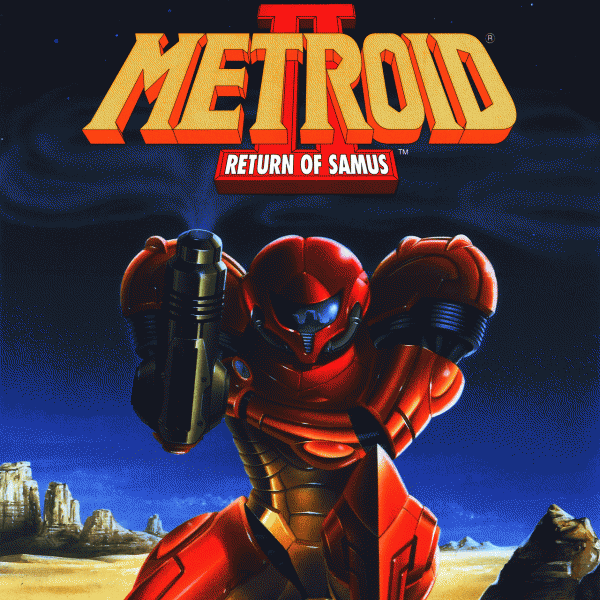 It’s time to look at the next installment in the Metroid series. As you may recall I was definitely not a big fan of the first game. The maze system is far too vague and you can get lost in hours. Major props to people who beat this game back in the day without save states or guides. I don’t think I would have been completing that game. This one improves upon the original for sure, but I still wouldn’t say it’s quite at the level where I could give it a positive score either. I like that the game is a bit more direct with the structure and the goals of the game but we don’t yet have a good map system in play.

The game starts with Samus landing on another planet. It’s time to exterminate all of the Metroids on this planet and there are quite a few of them so it won’t be easy. You’ve got a Metroid counter on the screen letting you know how many enemies are still on the planet. Gradually you have to take them all down. After you’ve beaten a good number of the metroids you unlock new paths to find the rest. Needless to say, without a map you could be here for a very long time. Another tricky thing is when you run out of missiles. Without missiles you can’t defeat the Metroids so you will have to backtrack and find a refill machine or beat a ton of enemies. The drop rate on the enemies isn’t too great though.

It’s always interesting playing a game in black and white. I haven’t played may of those at all so it’s really very different. Kind of cool in a nostalgia sense although I definitely miss the color. The graphics are okay but I can’t say they are particularly good in this state. The soundtrack is also pretty limited, the series didn’t hit the next level until Super Metroid. At that point is when we got an incredible soundtrack with all of the iconic tunes. This is right before that hype era.

The campaign is fairly short, but again that’s not considering that you should get lost quite a few times. It took me close to 6 hours to beat the game and that’s considering that I had a map with me. The game does have a real ending which ties into Super Metroid which is cool though. I like how the game is structured even if it is ultimately held back by how the game mechanics work. If this game had a real map then I dare say it would have been pretty good right off the bat.

It’s very challenging though so gamers who like to really work for their wins will definitely appreciate that. Some of the Metroids take numerous hits to take down. You’ll really have to be strategic here as even with a lot of life tanks you may quickly end up getting overwhelmed. You can’t really just run in and start swinging. Admittedly that’s usually how I like to roll but you gotta roll with the game sometimes and this is definitely one of those times. You either fight strategic or you lose.

There’s no real replay value to be found here. Once you beat the game that’s it. There’s no true post game. I suppose you can try to beat the game with a quicker clear time to get a different ending but that’s about it. It’s not personally enough incentive for me to go back in but if you really like the gameplay style then it’s a nice way to challenge yourself.

Overall, There’s not a whole lot more to say about this one. It’s a very similar game to the original Metroid except it’s less of a maze adventure as you’ve got more of a solid goal to achieve. You know from the start that you have to beat all of the Metroids so you find and blast them. Metroid is one of those series that I like a lot but mainly thanks to the later games. I’m still not impressed with these early titles. I’ll try out Super Metroid soon though and that one should be a big improvement. If you really like Metroid then maybe check this one out, but I’d recommend getting the 3DS remake instead. I imagine that the enhancements should help fix some of this title’s issues.