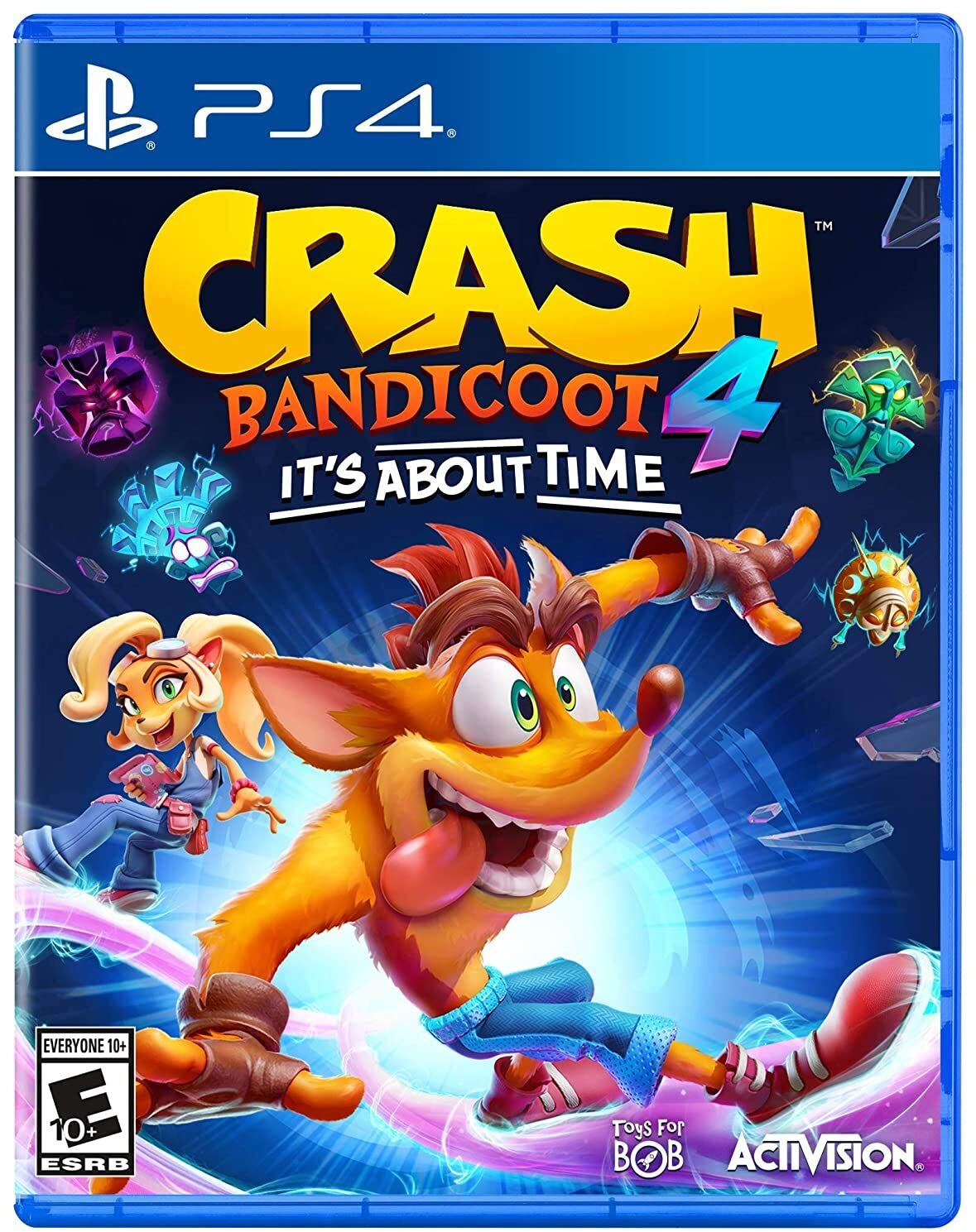 It’s time to take a look at the new Crash game that just came out. It’s About Time was definitely a title that got a lot of hype because it has been a very long time since we got a brand new Crash adventure. Throwing in time travel is always a good idea and in the press releases before the game they were showing off quite a lot of content. You really couldn’t go wrong here and not surprisingly the game is quite fun. It’s a worthy successor to the other games and continues the series on a solid note. It’s not very long but I’d say it’s about average length for a platformer. Additionally there is a lot of replay value with the various bonus levels and reverse modes present. Those’ll help this game last for quite a while.

The game starts off with the villains working to escape the pocket dimension they’re in. Uka Uka is able to break the villains out but they leave him to die. Nefarious decides to mess with the timestream quite a bit so now Crash will have to gather 4 of the legendary masks to counter this. Fortunately Crash isn’t alone this time. He has his sister Coco and a mysterious new heroine to help him out in the quest. With time travel and alternate dimensions to factor in, this won’t be an easy adventure for Crash. Cortex also isn’t thrilled at how things are going right now so expect some big things to occur as the game goes on.

The plot is fairly simple but does throw some wrinkles at you. I do always enjoy some good time travel so this helped the plot get to the next level. For the most part the game doesn’t use any big trips to the past but near the end there is one chapter that delves into this a bit. It’s also my favorite part of the game because I really liked the banter here. Time travel opens up unique situations like that which are a lot of fun. The Crash games wouldn’t have a whole lot more to bring up since the cast isn’t huge so that helped them pick the best character to do this with right away.

Crash as always isn’t the best main character but I suppose he just isn’t able to think a whole lot. He’s certainly better here than in some other titles I suppose though. It’s hard for me to call him a hero since I don’t even think he knows what he is doing but at the end of the day he does help save the world in his own way so I have to give him some props there. His sister Coco looks good here as well. She is definitely the brains of the operation and being a playable character was certainly cool. The new heroine is the best of the heroes though. She reminds the others that sometimes fighting on your own is the best way to go about things. She’s certainly been through a lot and I would have been game with having her appear more. Perhaps even as a boss fight trying to get the main characters to give up their quest. One thing’s for sure, I’m hoping she sticks around for future games.

Then we have the villains. Nefarious is the main villain here as he definitely gets the biggest role. He’s fun although he doesn’t quite have Cortex or Uka Uka’s charisma. He’s one of the weaker main villains in the series. Fortunately Cortex gets a big role either way. You can never keep this guy on the backburner. He’s always got to force himself into the plot one way or another and he definitely makes sure to do that here. In some ways you may even feel bad for him here. He’s the kind of villain that is almost pretty likable because of the fact that you know he is doomed each time but he always keeps on trying. You have to at least give him credit for his resilience.

The gameplay here is pretty smooth. The levels are 3D Platforming types where you jump past obstacles and take down enemies while approaching the goal. As Crash you can spin and double jump as always. The other characters have different moves though like how the heroine has a grappling hook and Cortex just blasts his enemies into submission. There’s also another character whose moveset is pretty different. The game helps to give you a lot more variety with the movesets this way which is a good thing. They’re all polished as well so none of them were just squeezed into the title.

The graphics here are definitely very good as you would expect. Everything is in HD and the character models+stages really pop out at you. I was glad that classic Crash was a costume option as well. That was definitely pretty neat and as soon as I unlocked that I never went back. The soundtrack isn’t super memorable but the stage themes had a lo of variety. One sad thing is if you die in a level then the character’s dialogue in the background is cut off and you don’t hear it again. I feel like you lose out on a lot of dialogue if you lose quickly. This was probably to make sure you don’t get annoyed by a line playing over and over again if you die a lot but I feel like they should have it set up so that only happens if the line is completed.

Overall, Crash 4: It’s About Time is definitely very good. It’s really a complete Crash adventure and has all of the classic elements from the first games that you will enjoy. The levels are reasonably difficult so you also won’t just breeze past each level without difficulty. You’ll definitely have to work hard at this to make sure you pace yourself and have good fundamentals. Without that you certainly won’t be prepared to conquer this title. Hopefully they keep on rolling new Crash games eventually. There’s always more you can do with the series after all. Maybe we can have the team warp to a dystopian future next time but of course we need to have Cortex on the team for a quick team up with Crash. Then he’ll see once and for all how conquering the planet could put people in danger. It may even cause him to change his ways or at least I’m sure he could trick Crash about that.