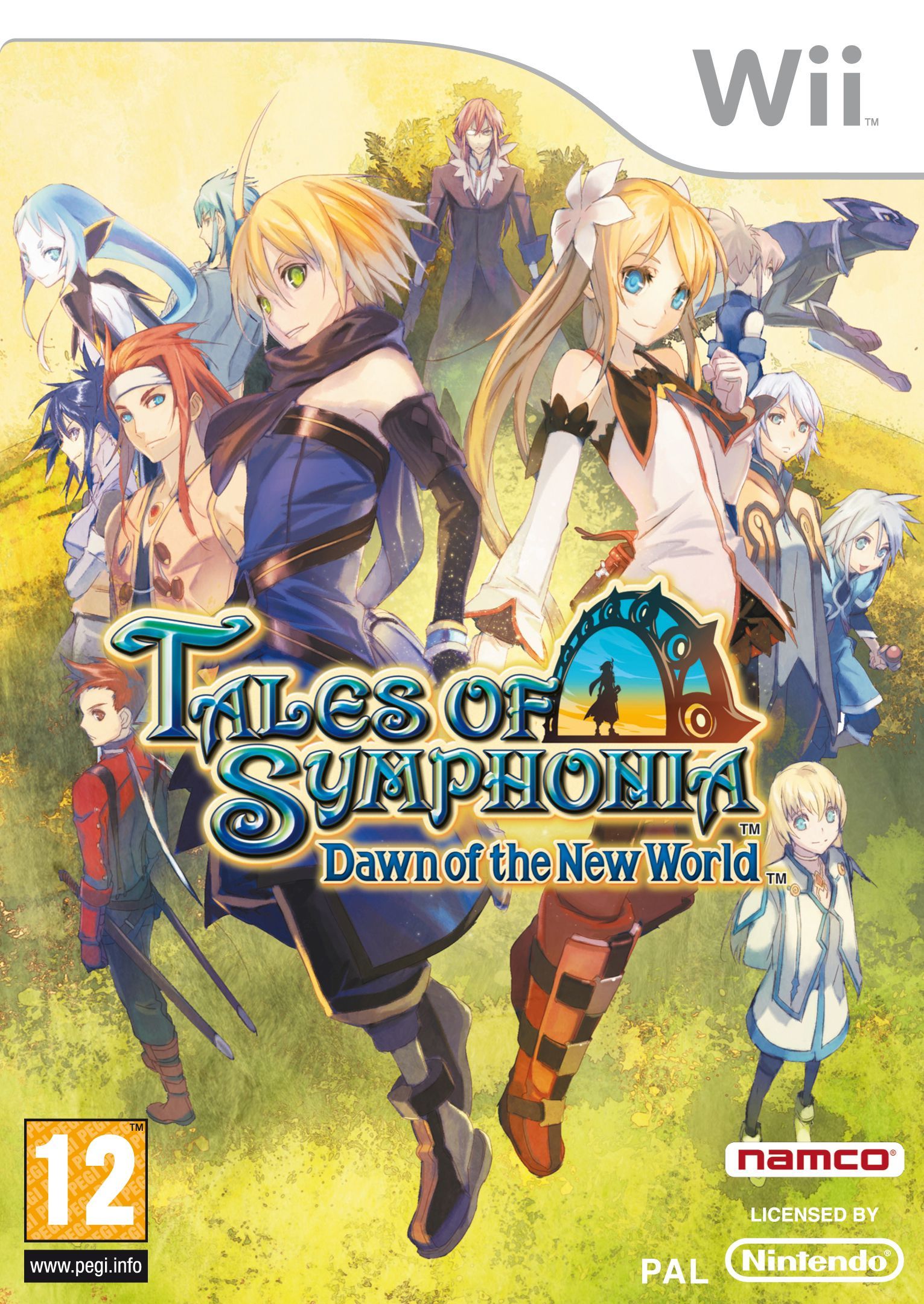 It’s time to look at the sequel to the original Tales of Symphonia game. As I recently beat the first one I knew it was time to jump right into the sequel. It’s definitely a very worthy successor. Is it as good as the first one? Well….it’s a tricky one. I do appreciate that we no longer have to worry about big dungeons and there are a lot more cinematics here. On the other hand, the original game had the better story if you ask me. So overall I would say that the original wins but it’s very close and that’s definitely impressive considering how good the first one.

It’s been a few years since the original game’s events concluded. The heroes succeeded in merging the two worlds together but this didn’t result in the perfect utopia that they expected. Instead of war about to break out between the half elves and humans, now there are big battles between the inhabitants of both worlds. The Church of Martel seems to have become more radical as well. The game starts with Lloyd appearing and murdering everyone in the city of Palmacosta. Emil barely manages to escape and saves a girl named Marta as well. We then skip forward a few years. Emil doesn’t remember these events and has had a pretty tough time of it. Nobody likes him as they believe him to be a bad luck charm. One day he meets up with Marta again who is being chased by a bunch of villains. She asks him if he will serve her as a Knight of Ratatosk and since he has nothing to lose, Emil agrees to this and gains a lot of power.

Marta explains her mission. She has to find all of the Centurion Cores and awaken them. This will restore Lord Ratatosk who will bring peace to this chaotic world. There are a lot of questions here to be honest but Emil doesn’t care. He’s finally found someone who needs him and so he has a purpose at long last. Emil agrees to help but he also wants revenge against Lloyd along the way. Emil doesn’t understand why people seem to love Lloyd so much despite the guy being a mass murderer. Most people don’t even believe Emil. Then you’ve also got the Vanguard which is an army of extremists who are trying to murder everyone and Emil’s mentor of sorts named Richter is a part of their group. The heroes will definitely need to take some sides here.

There’s a lot of story going on here and that’s why it’s always interesting writing reviews for an RPG. It’s a lot different from my standard game reviews where the plot doesn’t have to be mentioned much. Even from what I’ve written below, there’s just so much more to get into. Of course, it’s a story that is constantly evolving as you go through the chapters so you don’t want to get into it too deeply either. Needless to say there is a very large cast of characters here along with a ton of plot twists. You’ll need to play through the game in its entirety to really get the payoff here. I’ll still give a few thoughts here.

One of the big plots here is naturally involving Lloyd and how he went from being the main character of the first film to now seemingly murdering a bunch of people. If you played through the first game then I’m sure you’re thinking that there’s no way Lloyd would actually be evil. It would certainly be a bold move though that’s for sure but it would likely be a very unpopular move that would turn the fanbase against you. Well, the game explains why he’s doing all of this by the line but I just don’t buy into it. The whole thing is a huge stretch if you ask me. The guy’s just out of character, there’s no other way around it. It’s great to see him of course but he just doesn’t act like Lloyd.

It is always nice to see the old cast show up when you’re with a new group though. To date the game that did this the best was the second Golden Sun game. It was handled masterfully. Here you aren’t squarely against the old cast although you do get to fight Lloyd a few times which was neat. The game comes so close to making Lloyd the final boss which was impressive. It’s also just hype to see the characters acknowledge that Lloyd and the others saved the world a while back. It’s rare to go back to a world where the heroes are now famous for saving the world from the brink of disaster. Richter managing to fight off the whole original group was certainly impressive.

The game also retroactively shows us why the villain from the first game had some good points. Uniting the planet did nothing to stop the class battles. It just switched the sides. Now people from both planets are getting into even more fights than the old days. The characters are far from perfect and the world is in desperate need of someone saving it once more. The problem is that without a tangible villain to fight against for the most part, this battle is a lot tougher on the heroes. Then you’ve got the fact that Emil and Marta are working for a powerful spirit named Ratatosk who may or may not be evil.

So it’s a very ambitious story and certainly one that I enjoyed quite a lot. As for the characters, they’re definitely solid. Aside from Lloyd, I’d say that the rest of the old characters are in character. I’m glad that most of them are still trusting Lloyd although I don’t blame the ones who stopped due to how shady he is. If Lloyd doesn’t trust them then why should they trust him right? For the new characters, I’ll start with Emil. I can’t say that I’m a big fan of his. He’s just too timid. The guy backs down to everyone and always tends to panic. When the others get in trouble Emil is forced to call out for Ratatosk mode to save the day each time. Emil’s standard form is just in over his head and to save his character he would have needed to get with the program a lot sooner.

As for his Ratatosk mode, that’s when Emil’s at his best. It’s a similar dynamic to Jekyl and Hyde or Yugi and Yami Yugi. They are effectively different characters. As Ratatosk, Emil is a fun character even if you may not be able to call him a very heroic one. He’s always ready for a fight and isn’t passive this time around. When there’s someone in his way Emil will just blast through them. I wouldn’t have minded if he was in this form all the time. Then you have the heroine Marta. She’s a pretty unique characters. For starters she is constantly flirting with Emil due to admiring him after he saved her as a child. Emil doesn’t remember this and isn’t as brave as Marta expected him to be but that could also be why she was enjoying teasing him the whole time.

Beneath that she has a solid character arc though. Like Emil she has a lot of reasons for being fairly withdrawn and creating an external persona. She wants revenge on some characters but tries to hold this back. At the end of the day she is doing what she can to save the world and does well at this. I would say that she is better than the heroine of the first game. So the these two characters make for a solid duo. Then you’ve got Richter who is one of the major players of the game. He’s definitely a solid villain. No matter what justifications he uses, one of the guy’s first appearances is to try to murder Marta so there’s no way you can stretch him into being a hero. The guy has his goals and the motivations are solid but he definitely goes too far in trying to achieve them. He has the best theme in the game though which makes it extra fun whenever he appears. I also liked his weapon of choice.

The game’s story has a ton of cinematics which is fun because it makes this feel like a movie type event at times. There is always something happening and a benefit of being a sequel is having a lot of nostalgic moments everywhere. Pretty much every town is accurately recreated from the first game including the dungeons. The hub world is gone so now you go directly from place to place. I was definitely pretty cool with that. The graphics are quite solid and the soundtrack is good. While the first game wins with the music overall, I really liked Richter’s theme as well as the various remasters from the first game.

There’s definitely a lot of replay value here. The game itself is over 20 hours long and there are a lot of side quests and bonus cutscenes you can experience during the game as well. Add onto that the various collectibles and this will definitely last you for a while. It’s not quite as long as the first game but still quite long in its own right. There are also some new mechanics compared to the first game like being able to train up monsters. While it’s always sad to see them go back to level 1 when they reincarnate, their stats go quite high. They were super valuable during the final bosses here and they level up faster than the human characters so at least to me it seemed to balance out pretty well.

Overall, Dawn of the New World is a great sequel to the first Tales Of. I definitely recommend picking this up whether you’ve played the first one or not. Either way it’s a great RPG that really succeeds in every area. The fact that most of the dungeons are already completed when you start the game is fine by me. It just means that there’s more time to focus on the story and battles. We get quite a few action scenes in the cinematics like Lloyd taking on Richter or the main duo going up against Alice and her partner. The story gets quite deep at times and doesn’t pull its punches. The ending is pretty tragic in some ways but I was glad that at least some of the characters got a happy ending here. It would have been pretty sad if the game had cut out a bit early. Hopefully they bring these characters back for another adventure some day.