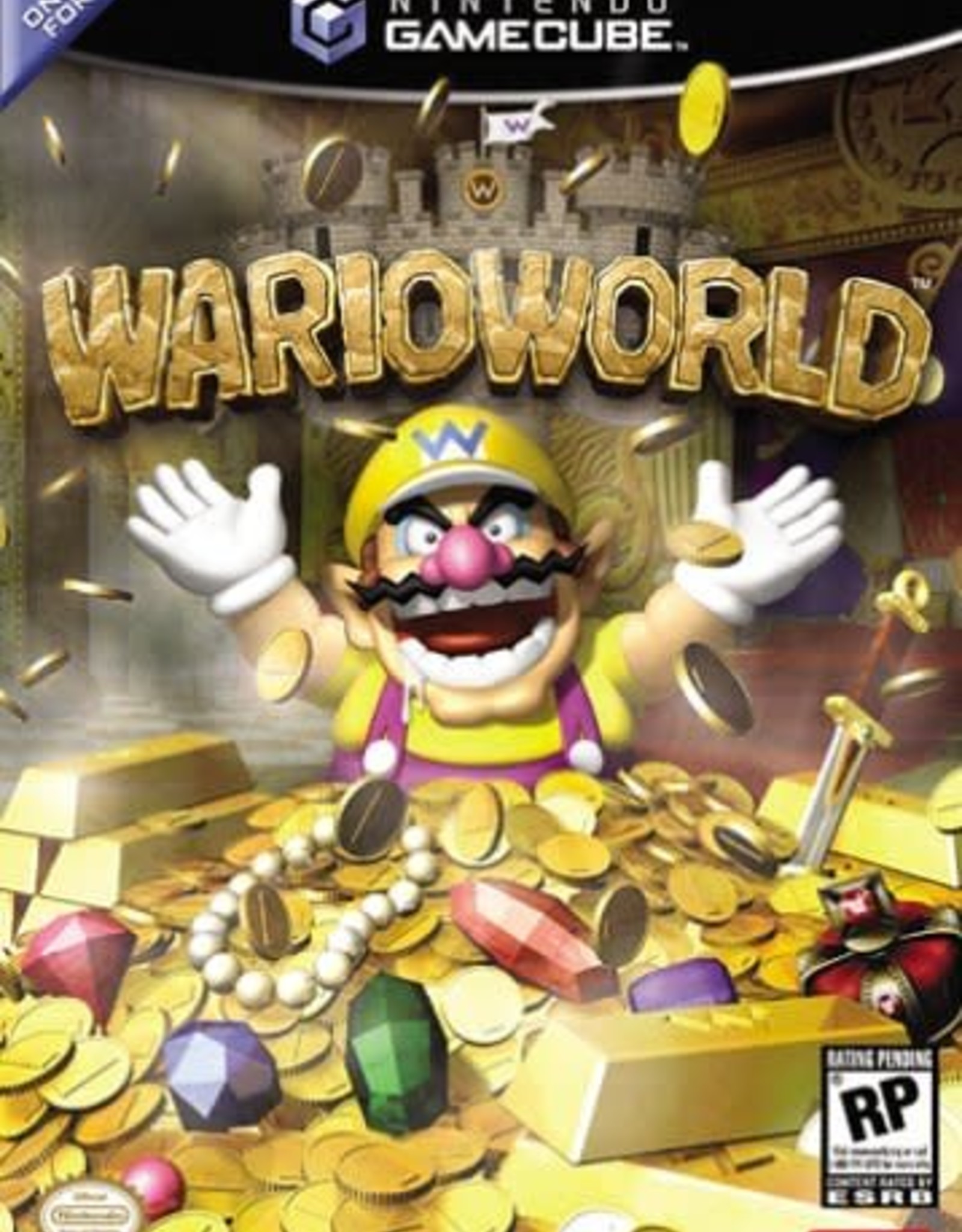 Wario World is one of those games that I had been meaning to get for a very long time. After all, who wouldn’t want to experience this platformer in all its glory? Well, I can see why it never got big. It’s a good game, but it’s not a very good one. It makes some key errors in gameplay and level design that hold it back. It’s also worth mentioning that the game is quite short which is definitely not a good thing. You’d expect it to be a little longer.

The basic plot is that Wario was enjoying his riches when a dark star arrives which blows the whole thing up. Wario now needs to reunite the 4 keys in order to open up a Treasure Chest and then take the star down for good. Can Wario really manage to pull this off though or is he going to need to call in Mario to end things before it gets too serious? One thing’s for sure, he is going to make sure to grab a whole lot of treasure on the way.

There are 4 worlds in the game and each one has 2 levels and then a boss. Right away you can see how this would be shorter than the average game because that’s not really a whole lot of levels to get through. You can blast through that with ease. The individual levels are longer than the average platformer but it’s still not quite enough to completely balance things out.

The gameplay is that of a 3D platformer. You can punch enemies out or slam into them. Additionally you can pick them up after stunning an enemy and throw them into something else. The goal of each level is to grab some red gems which can be found in trap doors where you have to solve a puzzle. How many crystals you need definitely varies but on average you want to have around 5-6. Just don’t skip any trap doors and you’re good. If the trap door is glowing then that means there is a crystal in there.

Make sure you go through the trap doors that have a closed door symbol on them. Initially I didn’t go through them since it didn’t seem necessary but I found out the hard way that you need those as well. In order to enter those you need to ground pound while holding an enemy and then you are able to get in. At the end of each level is a boss so make sure you go for their weak points. The little guys you rescue during each level will give you hints on how to beat the boss. How many of them you collect also determined how your ending plays out in the game so it’s something to consider. It seems like I got the second best ending which is pretty nice.

The gameplay is decently solid although the controls definitely feel a lot more slippery than the average Mario game. Some of the jumps can be tougher than they look as a result. I liked the combat aspects of it though. Being able to punch out your enemies is pretty nice and feels like something Wario would do. I didn’t appreciate the fact that you have to collect gems though. One thing I’ve never liked is when you have to collect things because it just doesn’t feel right to me. Can’t I just breeze through the levels at my leisure?

Meanwhile the graphics are good. It definitely has that retro Gamecube feel which is always so amazing. No other console has managed to hit with quite the same level of emotional value. The boss designs are also pretty intense like the guy who looks like DK. Now there’s a power hitter if I’ve ever seen one before. He had to be a homage to DK just like we had a boss later who was like King K Rool. The designs were definitely on point.

As for the soundtrack, it’s like a Bizarro version of the Mario themes. You have Wario doing his best to make the themes sound like the classic tunes but it doesn’t really work. His singing voice simply isn’t up to par and neither are the stage instrumental themes. Ultimately this definitely isn’t one of the game’s strengths. As for replay value, at least there is some of that I suppose. You can go back to try and grab all of the upgrades and collectibles. Only issue is that aside from the ending which is less than 30 seconds anyway, there isn’t much of an incentive to doing that beyond just a general feeling that you 100% completed the game. Maybe that’s all you need I guess. So if you really like the game then it’s an added bonus.

Overall, Wario World is a good game but you can tell the studio hadn’t quite found their footing on this one yet. It feels like there are just a lot of chinks in the armor that still need to be straightened out. It had a lot of potential but as a result this title can’t beat the average platformer. Right now the going price for this game is around 70-80 bucks so I would not recommend it for that price. Even if just because the game is so short. If you find it for a good price though then it’s worth a look as such an old school title.