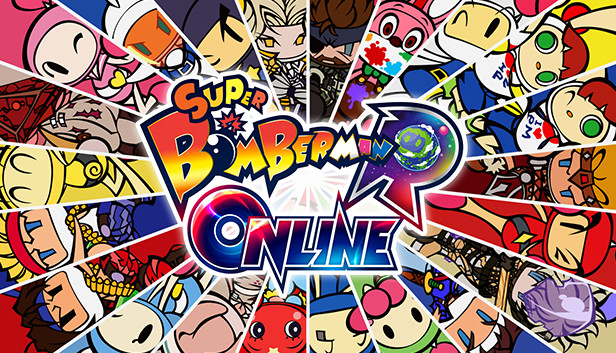 It’s time for the latest game in the classic battle royale style. At this point there are quite a few that have tried this our such as Mario, Tetris, Pac-Man, and now we have Bomberman. Unfortunately this one may be the weakest of the batch. It has some interesting ideas but it does feel like they put less effort into it compared to the others. The menu layouts aren’t great and the tutorial doesn’t even cover a lot of the controls. There isn’t a practice mode where you can try this out for yourself either. So at the end of the day what that means is this one just doesn’t hold up.

The main mode of course is to jump in and start a 64 man free for all. You run around the map and drop off some bombs in order to knock the other players out. You have two health points so if you get hit twice then that’s it for you. When the match starts you are effectively boxed in and have to blow up crates to get out of there. Each bomb destroys some tiles on all 4 sides of it. You want to stay out of range since your own bombs can certainly hurt you. After a while the stage will start to explode so you have to go and run into a different room. Once the blocks fall again you restart the process.

It may sound simple enough but you also have to factor in the special abilities. Each character aside from the main Bomberman fighters have a special ability to watch out for. For example, Solid Snake is in this game and he has the ability to turn invisible. That way you can’t see him until he throws the bomb and it is too late to dodge. Another character seems to have some kind of magnet. A lot of the characters need to be purchased so I didn’t try their abilities out but this is an interesting twist.

In most free for all games each character has the same abilities. Changing your character is purely cosmetic in order for everyone to have the same playing field. Well, that’s not the case here. Your characters all have way different stats. Another example is how many bombs you can put down. For example the average character can only drop one at a time but some characters can drop more than that. Then you have characters with bombs that have a longer reach, can throw farther, etc.

Due to each of the characters having different stats, I definitely expect we’ll see characters belonging to different tiers before long. Not every character is equal this time around so I imagine this game will be less balanced than all of the others. That being said, we’ll see if enough people are playing the game for that to become a big concern.

On one of the first days of the game it was already taking a while to get a match. I suspect that’s more an issue with the servers that they’re using and not a lack of player base though. It just seems like it would be way too soon for that to really become a factor just yet right? It does make it a little harder to really get into the action as well. There’s just a whole lot of waiting each time which gets old. You’ll want to be reading something as you wait.

The graphics are good though. It all looks pretty modern and you can really feel the energy behind all of the character designs. The levels look nice as well and the game reminds me a lot of the Mega Man Powered Up game from back in the day. It’s got that kind of a vibe/look at the very least. So I have no complaints with the graphics. The music seems a bit limited but it’s not bad either. You won’t have much time to think about it to be honest.

It is rather odd that the game doesn’t properly teach you how to play the game though. Figuring out what each of the power ups do will be up to you. Additionally the same is also true for learning how and when you can pick up and throw bombs. If anything I think the game could have done without that. It makes the strategy aspect a little more intense if you have to run around and dodge as opposed to just throwing the bombs away. Doesn’t that defeat the purpose of the labyrinth?

In the end, the game just isn’t nearly as fun as it could have been. Pac-Man was hype with how the gameplay worked and Tetris was absolutely stellar. The shooter games like Fortnite and Call of Duty have the style on lock of course. I don’t think any of these will be passing those but at least you want them to put up a fight. Tetris did that really well by adding a ton of bonus content through the years and the gameplay just really works.

Bomberman feels more like a cash-in with no real content to speak of. You have a battle pass so eventually you will unlock some costumes and such but it takes forever. I played 5 battles but with all of the waiting between levels that wasn’t as quick as I would have liked. It’s not a bad game but it does feel like one that is just trying to grab ahold of the battle royale trend. The problem is, with so many others to choose from I don’t see why you would stick with Bomberman for more than a few days.

Overall, Super Bomberman R definitely underperformed. I would have to say that it just couldn’t quite keep up with the others. It really didn’t feel like it was trying either. There’s not a lot of heart to this game. There would need to be some big fixes/patches to really get this one back on the right track. If you’re a huge Bomberman fan then you should check this one out, but otherwise I’d say to give it a skip.