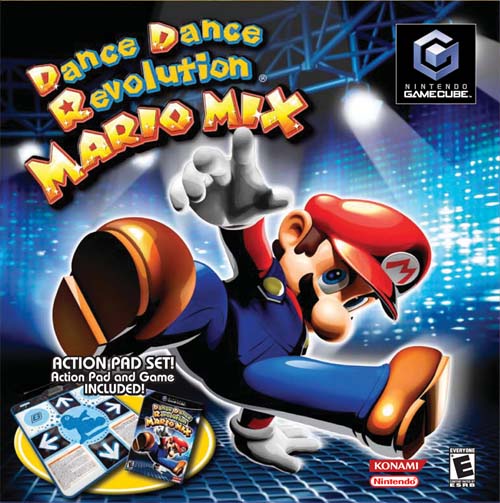 This is one of the only Mario games I had never managed to get my hands on before now. It’s certainly well known but usually hard to obtain. Well, I can say that it was worth the wait. The story itself is a lot shorter than I would have hoped but you can tell that there was a good budget behind this game. The effects and graphics are just way too solid to overlook and of course the soundtrack is a blast. If you want to play a solid rhythm game then you can’t go wrong with this one.

The story starts with Toad asking Mario for help because someone has stolen the legendary music orbs. Waluigi, Wario, Blooper, and more villains have united to take these away. Now the whole world is being forced to dance because of how the music magic has gotten free. Can Mario out dance everyone who gets in his way or is this possibly game over for the entire Mushroom Kingdom? Luigi and Peach are not here to back him up this time so Mario is really on his own this time.

There are 4 worlds here which each have 4 levels and then the final world that has 2 levels. Each world ends with a big boss at the end which is always fun and of course you have music tracks from across the Mario franchise. Some of the songs are hard to recognize from their original versions but they’re definitely catchy and work well with the fast paced levels. I played the game without a dance mat so then it’s all about timing as you push your control stick in the right direction at the right time. It’s all about having perfect timing and that sounds good to me as timing is what I’m all about. It works out rather well although the game is also quite easy. I picked the most challenging difficulty level and even then the villains could never get more than a D rank. That’s just how it goes I suppose so you’ll still want to give it your all just to prove to yourself that you can achieve the best.

Without the dance mat the toughest part is when you have to click both directions at once. Of course on the mat you can have one foot in two place at once but that’s not possible with a control stick. You have to quickly hit both sides as quickly as possible but you never get the perfect scores that way. As a result maybe it’s for the best that the A.I. wasn’t too good or that could have started to get a bit tricky. Playing this game reminds me of how the Kingdom Hearts melody game could end up being fun.

Where Nintendo went the extra mile here is by adding all kinds of visual elements and extra minions to the levels. They incorporate Goombas, Boo, Bullet Bills, Koopa, and all sorts of enemies into the mix. They affect how you have to use your control stick and it makes for a fun variety in the levels. Then you have the boss levels where you see both of the characters dancing the whole time. Mario is certainly confident in his skills and its well earned considering how well he does here.

I’ll also give the game props for having a real story mode. It certainly would have been tempting to have just side stepped that entirely but that’s not what happens here. The game takes itself seriously and there are cutscenes as we face off against everyone. Even Bowser steps in at one point which is always hype. The whole story is rather crazy from the jump with how the music magic works but you can just roll with it the whole time.

The graphics are also very nostalgic with how this reminds me of the Mario Party 4 game. The character models have aged well and so have the stage designs. This feels like one of the better depictions of the Mushroom Kingdom. You really get a feel for how daily life would be like in this place. On every technical level the game went above and beyond. The only thing that would hold this title back is the super short length and even with that you’ll have had fun during the journey.

Plus there is a multiplayer mode so that’ll help with the replay value. You could end up playing through the game for quite a long time as long as you have someone to play it with. That’ll really test your skills although I hope that there is a way to speed the levels up further than you could in story mode or it’s possible that both you and your opponent will be absolutely dominating the matches the whole time. I’m sure there is some kind of tiebreaker and you guys won’t get perfect scores all the time so that helps out a bit but speeding things along would certainly help to make it all a bit more exciting.

Overall, Dance Dance Revolution has always been a fun genre for games. I don’t participate in them too much myself nowadays but it was a good way to burn some calories and get a good workout. Throwing in the Mario characters was brilliant and I almost feel like they should bring that back in the present. I think it could absolutely sell super well if it was marketed right. I’m not sure if the Switch has any compatible dance mat at the moment but if not that’s something that could be changed really quickly. Playing through this game is like digging up a lost piece of your childhood. If you like the Mario games and grew up with the Gamecube era then this is a title that you’ll want to get. It’s a title that has aged too well to pass up. There’s not much to it but the game’s a lot of fun and you’re always reminded that Nintendo made that their top priority when making games and it definitely shows here.