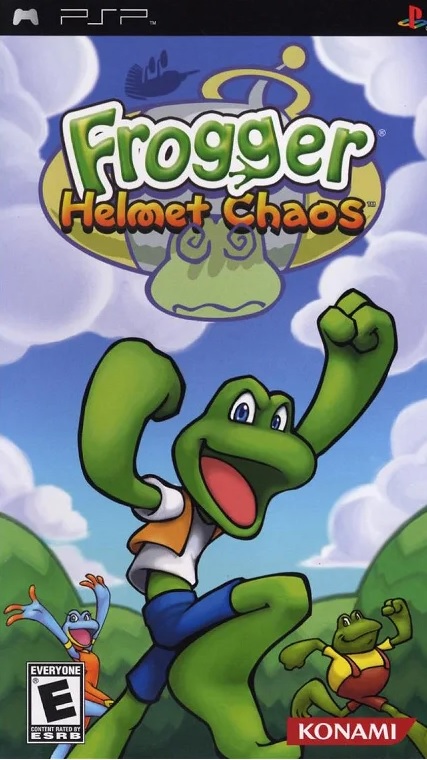 It’s time for another Frogger adventure. You know that things are going to get intense when this guy’s around. It’s a fun enough game but does suffer from being a bit short and not having a level select. It’s one of those games where when you beat it, you’re taken back to the opening cutscene. So that removes pretty much all of the replay value that you could possibly have had for this one. It’s a shame because there was some possibilities here to at least see if you can collect all of the coins but that’s gone now. You can have a good time here but it won’t last.

So the story starts with Lumpy getting attacked as a brainwashing helmet is put on him. He didn’t realize this until it was too late and now Frogger has to go and save him. Can he possibly pull this off? Well, to be honest he pulls this off almost immediately but it leads him deeper into the fray as he must now stop this villain empire before they go too far. Only Frogger can possibly stop these guys and so he is on his own now. If he can’t win this…then nobody can!

The gameplay is your classic Frogger experience so I don’t have any real issues with that one. Hop around and get to the end while trying to avoid enemies. One thing I do like here is that you don’t immediately die when bumping into things. I may be misremembering but it felt like in a lot of others you would die right away while here you have 3 health points. Additionally, the levels are all just constructed really well so you’ll have a good time going through the motions.

One thing I don’t like is that your jump has lost a lot of its ability and use here though. For example, now when you jump you don’t go over an enemy so you bump into them instead. A big part of what made the jump good was how you could actually just go through enemies that way. Now you have to run around them. I suppose you can say that it adds strategy but to me jumping was a key part of the strategy. It’s just a different one but not necessarily a better version.

As for the boss fights, I did like the fact that the game had them in the first place. They were very different from the actual levels too. They could and should have been explained better like the fact that some bosses can’t be beat and you have to dodge, but they all had unique mechanics. I felt like the devs paid extra special care to this part of the game which was appreciated. If the overall title could just have been a little longer then I think all of the hard work would have paid off.

It’s just hard to glance over the fact that the game is only a couple of hours long with absolutely 0 replay value. I probably would have been lightly salted if I had bought this game day 1. It just wouldn’t have felt all that enjoyable to have been done with it so quickly. The story is decent enough but it’s not like it’s something that could carry the game either. The story would have to be truly spectacular to pull that off in such a short experience and clearly Frogger was not going to be able to do that. It’s too far out of his wheelhouse.

The Frogger franchise hasn’t always been known for its high quality games. The gameplay tends to be solid but then like with this game you tend to come across some issues. If a game is too short and there’s nothing to do then it’s going to be rare that you get a really good score. I would say that the game is good but not very good. It’s still lacking just enough oomph to get it to the next stage.

At least the graphics and soundtrack are okay. I wouldn’t say it’s super memorable or anything with the music but the game looks nice. There is also full voice acting here which is a big win for me. I still say that having voice acting automatically bumps you game up a tier because it just makes the whole story more immersive. Even a story that’s not too impressive like this one gets better when you’ve got full voice acting to back it up. It’s kind of odd that the text doesn’t auto scroll while they’re talking so you have to time it and click A as it’s moving forward but that’s a small thing I can overlook.

Overall, There isn’t a whole lot to discuss with Frogger since the game’s so short. I will say that if you like the Frogger gameplay then you should check it out. It’s a straight forward game that should give you a good amount of enjoyment for 2 hours but you really need to make sure that you get a good price for it. If it costs a lot then it’s not worth it. Full stop. The price is the big deciding factor here because it’s a good game but one that you feel should be free the whole time. I can’t even imagine paying full price for this one. Now that would be a complete travesty. Hopefully Frogger comes back with a big budget full experience at some point. With this gameplay it would have a lot of potential but I suspect that we might have to wait a while for that.