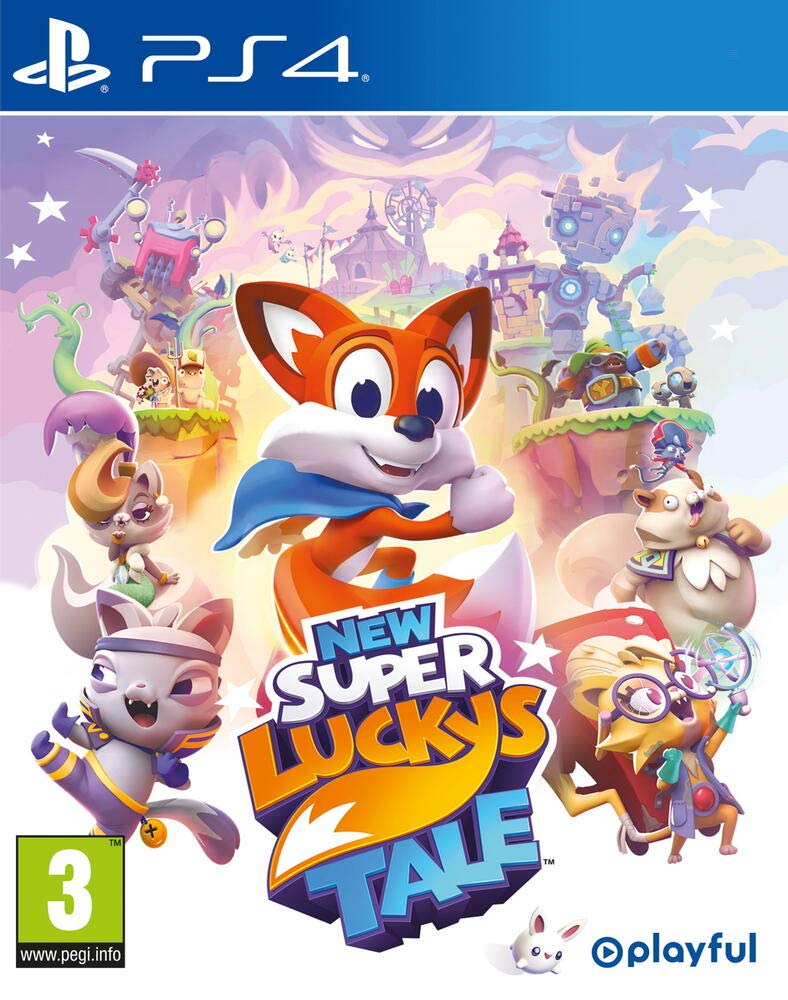 This is a platformer that got a whole lot of hype back in the day. It looked very polished but also retro in a sense as it would be a simple platformer filled with a lot of fun and no real gimmicks. I’d say it delivers on that too, you’ve got a solid amount of level variety. Each level is rather short but they all feel different and are very fast paced. You shouldn’t have any problems playing through it and there is also a good amount of replay value.

Lucky has to try and get the chapters of the legendary book back before it’s too late. There’s a dark overlord scheming to use this for evil and the whole world is pretty much in jeopardy. This is perhaps an oversimplification of the plot to be fair but it’s a classic story that will get you right into the mix to try and save the world. Most of the other characters can’t talk in English voice acting at least so it’s going to be up to you to confront the villains and save the day.

Lucky’s a fun lead. There isn’t a whole lot to his personality as I couldn’t tell you much beyond him being a nice guy but he gets the job done. He has two jumps and can do a spin in the air. I always like when platformers let you spin in the air because it really helps you work on your timing as you try to dodge enemy attacks. Every game that has this feature has really benefited from it. There is also some combat in the game as you can attack with a tail swipe but aside from one boss fight you won’t really need to use this very much. It’s nice to have but never feels super necessary. A lot of enemies you can just stomp on anyway.

There are also puzzles here but this is one of the rare games that actually gets them right. The puzzles tend to be about pushing statues into the right spots. It takes a bit of work but you’ll find out the right answer if you keep at it. It reminds me of something out of Professor Layton and has that very calm appeal to it. You can reset the puzzle at any point to try it again from the beginning as well.

Most of the levels are traditional style but then you also have a few auto runner type levels where you just start running and have to try and be at the right place at the right time. These levels fit in well with the normal ones I’d say. I tend to enjoy that kind of gameplay as well. There’s a good amount of variety here and each of the styles control rather well which is important too. I would say the strongest part of the game is just how smooth it is. I doubt you’ll encounter any true glitches or issues that make you do a double take. It’s as smooth as butte and that’s what you like to see in a platformer like this. It’s critically important you could say.

Now if the game has any issue it’s that it can be a bit short. Yes, platformers are often short but this one feels even shorter than usual. I believe it’s because of how the worlds are set up. In a lot of platformers you have to complete every level to get to the end but in this one you don’t have to do that. In fact, a ton of the levels are optional. The reason for this is each world has a boss level at the end and you have to get a certain number of leaves in order to access it. Typically this number is 10 while each world has about 22. Each level has 3-4 leaves in it. So for example if you get all 4 leaves in the level then you only need to complete 3 levels instead of completing more like 7 or so.

It puts you in the driver seat of how quickly you want to complete each of the worlds. I quickly got the hang of how to obtain all 4 in a level and once I did that was it. I was getting 4 on each one so I was blasting through the worlds. Typically you get one leaf for beating the level, 1 for 300 coins, 1 secret page somewhere in the level, and one for getting all 5 letter of the word Lucky. Getting the coins and the letters are real easy once you start paying attention to them so at the very least you should get 3 each time but eve the secret one’s usually not super hidden or anything. That’s your chance to grab it as soon as possible.

Of course the good part about this is even if you complete the game quickly, you can always go back to try and get the leaves that you didn’t get. It’ll certainly take a while to nab them all and to get the Platinum trophy for this game so that would be worth a shot. It definitely looks very achievable after all so you’ll just have to hunker down and try to knock it out. Pull that off and you’ll have another nice achievement to your name.

The graphics are really solid here. It all feels like true HD and goes hand in hand with how good the levels look. As for the soundtrack, that is a bit more forgettable. I wouldn’t say that it particularly stood out to me. It’s absolutely not bad in any way but there wasn’t a single tune that I found to be really catchy. This is something that I think they could improve upon in the sequel. Get some really fast paced tuned and maybe even a rock theme or two. You really can’t go wrong there.

Overall, New Super Lucky’s Tale is certainly a fun game to check out. It’s got the right balance of action, adventure, and puzzles. I definitely didn’t think I’d be complementing puzzles anytime soon but this game just pulls it off. Honestly if all of the games would handle it like this then I dare say we would be in a really good spot but unfortunately I know that this is more of a one time deal. For every game that gets puzzles right, 9 more show up with really annoying gimmicks that don’t make any sense. You definitely need to play this game if you want to see a platformer that’s solid around the board.