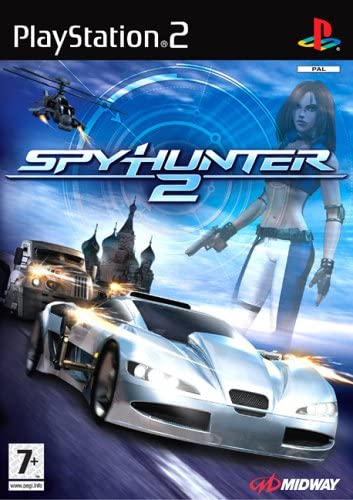 It’s time to finally jump into the next installment in the SpyHunter series. The first one was a reasonably solid game that didn’t have a big story mode but the gameplay was pretty solid. This one switches things up quite a bit. There aren’t a lot of objectives you have to complete in every level this time, typically there will just be 2-3 and they are done one at a time instead of being all at once. As a result the gameplay experience is a lot smoother and this one definitely beats the original.

You’re given the story objectives through the loading screens each time but effectively another terrorist group is around and they’re causing mayhem. Funding the wrong people, causing explosions and damages, etc. It’s now up to the main character to put a stop to this. He now has one ally, a professional agent who is so skilled that she gets the opening cutscene here. Will these two be enough to stop the villains or have they already lost when faced with this much unchecked power!

So the general gameplay is that of a 3D racer. You drive your car through the levels and blast away at all of the enemies who attack you. Typically there is some kind of opponent to beat at the end but other levels will have you protect someone or have to destroy a bunch of objects. There are no literal races here as every mission is serious business. You have two weapons and a defensive option at the ready. You unlock new upgrades every few levels and the game will always default you to the most recent ones. Often times that’s for the best but on the defense side I actually preferred the forcefield that gives you complete invincibility for a little while over the improved armor which was technically scored higher.

It’s nice that you actually get to customize your weapons this time around though. That’s not something you were really able to do back in the day. The level designs are all pretty sharp as well. Only once did I think the level wasn’t too straight forward. It was a water level where you had to use a lot of short cuts through the pipes but because the pipes were everywhere the whole thing got confusing really quickly.

Now this is not an easy game by any means. Expect to die quite a lot because your vehicle doesn’t have a lot of durability. Aiming is also very rough here so a lot of times you will be blasting right at an opponent and still missing somehow. I definitely think that part could have been refined a whole lot more than how it was. Something tells me it was not intentional but hey…if it was intentional then I guess that’s fine…not. Still should have been more usable.

The best thing to do sometimes is to just circle back. Never let an opponent get behind you because then they start blasting and the next thing you know, your car is completely broken. Losing some time to get behind them is always worth it. Fortunately later on in the game you get a smoke attack that shoots behind you and it is easily the best tool at your disposal. It can beat just about any minion instantly and it even works on some of the bosses. I remember having trouble with one of them so I went on ahead and used the smoke. Surprisingly it did the job.

The game does allow you to be a little creative here. It’s also done in a way where you don’t feel too annoyed at having to start over again. I’d say it’s because the game is fast paced and the soundtrack is so good. You’ll see some really excellent themes pop up from time to time in this game. It’s got that old school rock feel to it which really makes the races a whole lot more exciting. The graphics are also very good. Not out of this world or anything but it holds up quite well over the years.

One tip I’d say is that your vehicle actually has a ground mode. There’s one level where you have to go through the mud and the car was going super slowly the whole time. So I thought that was intentional and it was one of those almost auto scroller type levels but then I lost due to the time running out. It turns out that I was supposed to click the upwards directional button to transform. I don’t recall the game explaining that at any point and so it took me a little while to figure out. If you’ve got that at the ready then you’ve nothing to fear.

It’s just a strong all around title. The gameplay is really good and it stands out among its peers as a vehicle combat game. I’d like to see the series get more of a comeback with some AAA titles in the future. I think there is a whole lot you could do with this franchise and a solid company could really get it into the mainstream. I guess we’ll see if that ever happens or if this stays forgotten in the past instead.

Overall, SpyHunter 2 is a pretty good game and I’d recommend checking it out. The campaign isn’t super long or anything so you’ll have it beaten before long but the difficulty level really helps to keep it from being too fast either. So that way you’ve got a pretty good balance here. Just keep on trying and use different tactics in the levels. Before long you’ll have this one knocked out and then you’ll be ready for the next challenge.