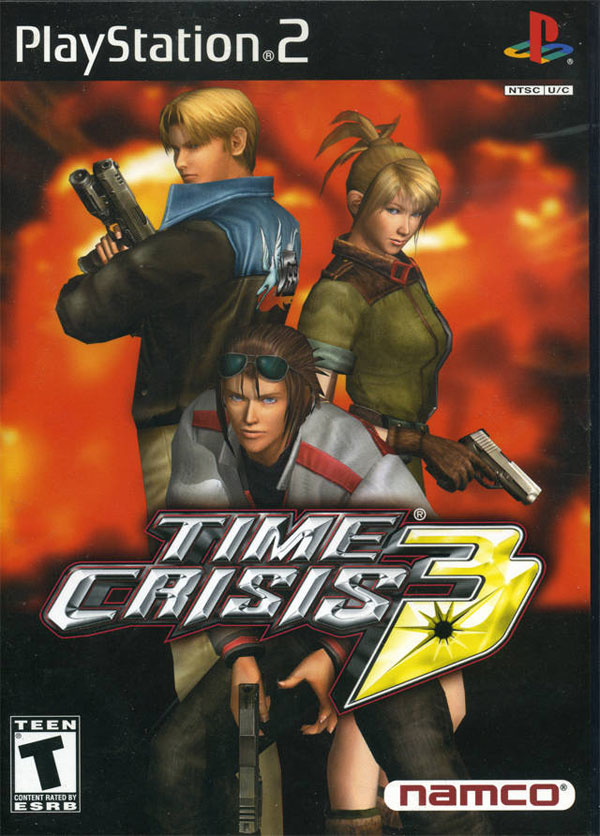 This one’s fairly similar to the last Time Crisis in a lot of ways. It’s got the fun cinematics that you always want to see and has a good soundtrack but the game is just so short and it’s hard to get around that. It’s over in the blink of an eye and before you know it, it’s time to put the game back in the drawer. Still if you liked the second game then you’ll like this one since they’re very similar.

The game starts with the VSSE agents on another mission. They are attacked by another evil group and have to put these guys down real quick. Fortunately they are professional so this shouldn’t be hard. Along the way they meet up with a lady who is here to bail them out of some tough situations. The 3 of them are ready for any danger that comes their way because they know that their victory is inevitable!

I wouldn’t call the game identical to the last one per say but it is similar. The game has 3 levels and each one is divided up into 3 areas. You have to blast your way through every enemy in order to prove that you really are the strongest guy on the block. You have 40 seconds for each mob rush and so you have to blast them all away. Don’t get hit by one of their attacks or you will lose a health point. Lose all 4 health points and you lose a life. You gain a new continue each time you get a game over so eventually you will have unlimited lives. You can’t move so the only two controls are to shoot and hide. Of course you can move your curser though.

Now this game is considerably tougher than the last one. Remember that in Time Crisis 2 I didn’t actually have to wait until the unlimited continues to win. It took me a few game overs but eventually I was able to beat the game. Not this time, I couldn’t come anywhere close and just had to keep on losing until I got the free continues. Only at that point was I actually able to hold my own here. This game was just impressively difficult because there are so many enemies and their reaction times are amazing. I know this isn’t my genre but even so it is no easy feat to get me to have so many game overs.

The game still feels fair all the way through though. Every time I got hit I knew that it was an attack that I should have been able to avoid. Whether I was getting too greedy in getting extra shots off or not ducking when I needed to, each of the hits made sense. It’s just hard to stay super alert and consistent the whole time. The penalty of making even one mistake is really quite large in this game. So focus up and do your best but don’t feel bad if you need the unlimited lives by the end.

Like with the last game we get a good amount of cinematics here. This time you get one for each area in addition to each level which was nice. You also have some returning villains from the first game and the villains all have solid designs. The game is as out there as ever and that’s a good thing. It’s just all so chaotic but in a good way. You don’t really know what’s going to happen next and that’s exactly how you want it.

The soundtrack is also still very exciting. The rock themes just keep on coming and they help to get you pumped during the levels. I had a good time with the story and James Bond could take a few lessons from these games on how to make your secret agent stories as good as possible. This one just had the right formula in order to make everything feel like a win. It’s not as easy as it looks.

There isn’t much replay value here though which is why I have to dock a point from the game again. Ultimately after you spend an hour beating the game there just isn’t a lot left to do. You can do the normal stage levels I suppose and there seems to be some kind of rescue mode but it’s all still very short. It’s a byproduct of being an arcade game but there should be some way around this. In fact, Time Crisis 4 did get around this so stay tuned for my review of that game soon once I complete it.

As it stands, you’ll only want to buy this game if you can get it for a really good price. If you are able to get it for cheap then there is really no issue here. You can play through the hour and have a good time. If it’s expensive though then you may feel like you’re losing out so bide your time and wait until you’ve found a good deal. Then you’re really all set here.

There is one difference though which is that you can now switch weapons. It’s surprisingly not a big deal most of the time as you’ll stick to your pistol but now you can also use a machine gun, grenades, and a shotgun. I mainly would save these for bosses as it can be tough to get the ammo that you need for them but they do help to save you some time there. I would spam them as soon as a big opponent showed up and the grenade can take out half a life bar which is great. I think there is more you could do with these weapons but I understand why they don’t give you unlimited ammo. If they did that then who would ever use the normal gun right? One risk with the other guns though is that you could be having so much fun that you don’t notice when someone is about to fire and take some extra damage. That definitely happened to me at times.

Overall, Time Crisis 3 builds on what worked in Time Crisis 2. It’s virtually the same game just with a different plot this time around. The graphics and soundtrack are similar but that’s a good thing since I enjoyed them in the second game. Sometimes it’s not a bad thing to just be a copy of the last game since what worked before will still work now. That said, it really needs to improve the length because you’re done with the game way too quickly. Increasing the difficulty may buy some time there but ultimately it’s not enough. (I am glad they still give you more continues for each game over though. Getting rid of that would have been a big mistake)