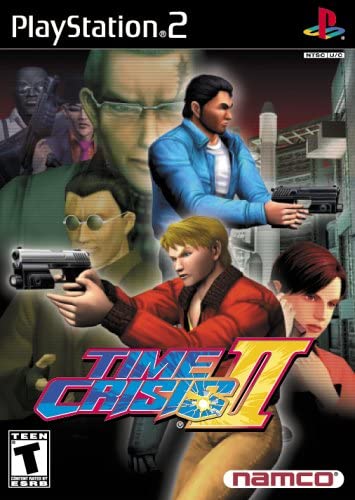 I’ve had Time Crisis 4 on the backlog for many years so it was finally time to go ahead and buy games 2 and 3. Well, this one is fun and while I do think it’s a bit too short which takes a point off at the end, it’s still a fun game. First person shooters aren’t typically my favorite games and even less so when you cannot move since this is a rail-shooter but the game has a fun plot with several cinematics so that keeps things moving well.

You play as two VSSE agents who have to stop another villain group from setting off nukes and destroying the world. It’s a fairly simple secret agent kind of storyline but one that works well within this setup. There are 3 levels in the game and each level has 3 areas. So you’re going to be completing this game in under an hour but the catch is that there are no save points. If you get a game over then you have to start from scratch. That’s quite difficult so the game does throw you a bone here. Every time you get a game over, you start the next playthrough with an extra life. Obtain 7 game overs and you will finally unlock unlimited continues which is where you can really have fun.

Personally I’d like to have unlimited lives from the jump but I do get the rationale of having it be an unlockable. Ideally it means that you try as hard as you can on the first playthroughs and if you still couldn’t beat the game then now you can at least see the cinematics and everything with no pressure. Or if you don’t want to do that then you can quickly tank the playthrough and get a game over as soon as possible. The game tries to discourage that by making the first level rather easy so you feel like if you’re in that deep then you may as well finish out the run.

The game is very difficult though so good luck trying to get all the way to the end. I didn’t need all of the continues but I wasn’t able to win until I had 7 saved up. With those I was able to plunge ahead. The way the game works is interesting as you’ll always see a lot of people shooting at you but half the time they aren’t actually doing anything. The ones you have to watch out for are the enemies in red and blue since they mean business. When a real shot is going towards you then the screen will flash red so you know to dodge.

To dodge you have to let go of the square button which is what lets you aim. This makes you hide back behind a wall or another object. When doing this there is no way for you to be hurt. The reason you can’t do this forever though is because each minion rush has a 40 second timer. If you don’t beat them within that time then you lose a health point and each health point is crucial here since each life only had 4 HP. The trick is to react quickly so that you keep on firing and then dodge as needed. It’s easier said than done though that’s for sure.

The graphics are pretty good here. This is a PS2 game with a rather decent budget at least based on the looks. I was satisfied here. Then with the cinematics they’re a lot of fun. We’ve got full voice acting and a very intense soundtrack with a lot of rock. Mix in the explosions everywhere and the game went all out in making this as exciting as possible. I think the Time Crisis series would make for a really exciting action series if they ever wanted to make a TV show or movie out of it. In the meantime these games will do.

As I mentioned the actual game length is less than an hour but for replay value you could always try to beat your high score or do some free play. You’d probably need to be a fairly big fan of the gameplay to do that but it’s an option at least. Personally I wouldn’t try getting the game unless you can buy it for $10 or less because there just isn’t enough content. It’s a good game and I got it for a good price but otherwise if I had gotten this on launch day then I probably would have been a little disappointed.

Perhaps it comes with the territory of being an arcade game but even so I need some serious replay value to keep things moving at a high level. Titles like Pac Man and Galaga have a ton of replay value built in so serious fans of the shooter genre may find that same value here but for me it just isn’t the same. This is the kind of game you beat straight through in order to see the whole story and then you call it a day.

My final tip when playing through the game is to just hide as soon as a blue or red fighter appears. Technically you can try to shoot them before they get off the first shot but it’s risky. Your reactions really have to be great whereas if you hide right away then you have a good chance of their not shooting when you return. The game is realistic in that you can’t tell what they’re doing while you hide though. So be prepared to react quickly when you go out there again because if your timing isn’t good you’ll be escaping just to take a direct shot which would defeat the purpose of your hiding in the first place.

Overall, Time Crisis II is a good game. I wish that it was longer but at least it does still make for a complete story experience. You’ve got a serious plot here with quality characters and an engaging story. Full voice acting and cinematics is something that will always elevate a game for me. The actual shooting gameplay is smooth enough as well. It isn’t really my thing so the game felt extremely difficult but it seemed polished for what it was trying to do. If you’re looking for a quick PS2 game to add to your collection then this could work out. Otherwise you may want to pick up one of the newer installments instead.