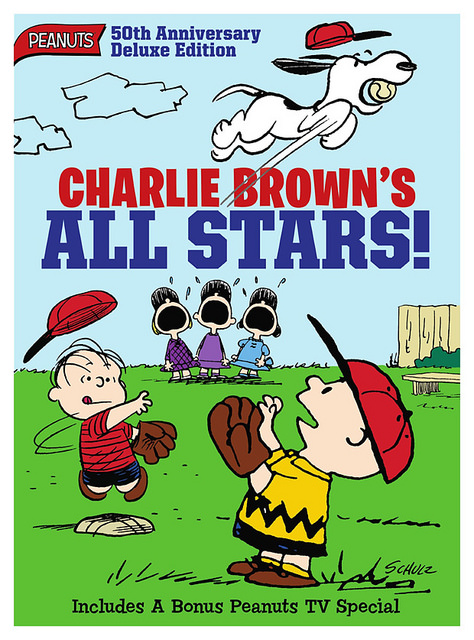 It’s time for another Charlie Brown film! This is one of the better ones as expected since it is about Charlie Brown’s baseball team. They’ve been mentioned several times throughout the series, but have always been a subplot. This time, they’re able to be the main focus and that’s something that I’ve been waiting for. Whether you can really call his team “All Stars” or not is up for debate though. I can’t even say that they have the heart of a winning team.

Charlie Brown is a little disappointed because his team can’t seem to win a game. It’s been many years and none of the players are any good, but they all still blame Charlie. He is the pitcher I suppose so every point that the other team gets is directly on him, but then he should just let someone else take a stab at it. Eventually, the team breaks apart and the other members form their own clique as they go swimming and skating. Charlie wonders how he can get them back and that’s when a sponsor shows up. He claims that he will get the team new costumes so Charlie quickly tells the others. They agree to keep on playing then, but Charlie gets another phone call. Dogs and girls aren’t allowed on the team if the sponsor jumps in so he has to decline the call. The other members don’t know this yet, but it’s only a matter of time. Will they ever be a close knit team again?

So there’s definitely a lot of drama here. Charlie has to make some hard calls and he finally gets to see who his real friends are and which ones are the phonies. Although, I suppose they aren’t too phony since they don’t mind insulting him face to face. At least they’re up front about it…I can kind of respect that I suppose. As always, Linus is Charlie’s only real friend. He does have one iffy moment where he tells Charlie to pack his bags and get out of town, but I’m sure that he meant it in a nice way. He does help to clear Charlie’s name during the climax when the others get the wrong idea because Charlie phrased everything the wrong way.

I also liked Charlie Brown as the lead. That was expected though since he’s always a cool character. He may not be the sharpest tool in the shed and he may not be particularly good at just about anything, but he does have passion and determination. He even declares that a little rain never hurt anybody at the end as he walks to the baseball field even though it is raining really hard. He didn’t even bother to bring an umbrella. Nobody else showed up except for Linus of course and Charlie should have suspected that since nobody else even liked to play by that point, but 2 people is enough to declare the game a win by default I suppose. Charlie and Linus always tend to be the best characters when Snoopy isn’t around.

Snoopy was around though so he does steal the show to an extent. This is one of his smaller roles, but he does get to smack Charlie with his food dish and make a crucial out during one of the games. Since Snoopy is always so good at everything, I’m inclined to believe that he was just holding back the whole time. Sometimes he probably just wants to teach the others some humility. That…or he just likes seeing them lose from time to time. The other friends are really all just there to mock Charlie and be generally mean to everyone. It’s not really nice of them, but hey….what are friends for.

The graphics are all right as always. It may not be the greatest animation, but they have aged fairly well over the years. If nothing else, it is really iconic to look at by this point and the special is just a calming experience. There isn’t much of a soundtrack, but the themes are all very familiar as well. This is a series that should feel very nostalgic as you watch it unless you really have managed to avoid it your whole life. That seems like it’s be a tough feat, but anything’s possible in the end. This also means that I am now one step closer to watching all of the Charlie Brown specials.

Overall, This is another good Charlie Brown special. What makes it a little better than some of the others really comes down to the main plot. Baseball is simply more interesting than a lot of the other stories. I like sports in basically every shape and form. There aren’t even any subplots for once so the total focus is on Baseball. The special is also fairly short so it goes by very quickly. If you’ve seen other Charlie Brown movies then you really know what to expect. You’ll like this one if you’ve liked the others. If you haven’t seen any yet, then this is a good way to start off and I’d recommend checking it out. It’s the kind of special that just feels good to watch.