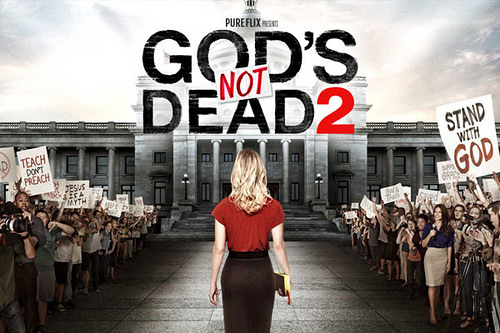 I got to watch this film in theaters a while back, but it took a while to get around to it. I really enjoyed God’s Not Dead so I was looking forward to the sequel. Debates with non believers on the validity of Christ is always very entertaining and I certainly recommend looking up some of the professional debates that are on Youtube. There are even Christian vs Christian debates online as they tackle the deeper topics like predetermination, and on whether parts of the Old Testament were parables. (I definitely disagree with the latter. At least on the Jonah and the Whale part. I think that definitely did in fact happen and it was not simply a story) God’s Not Dead 2 ups the stakes as the debate is in an official court room this time.

Grace is a history teacher and one day she gets asked a question about whether King Jr., Ghandi, and Jesus Christ had similar messages of peace. Grace responds with a sound yes, but one kid in the back quickly sends a text to his parents. They quickly take it up to the Principal and they are ready to take Grace down if she does not retract her statement. Grace definitely does not and she quickly gets assigned one of the worst lawyers that they could find. Little do they know that Tom is very enthusiastic and doesn’t like to lose. He may not be at a high rank yet, but he’ll still give this his all. The two of them prepare for the big day in court as they fight to protect the right to use the Bible in historical context while at school.

The one iffy thing about the first film was that it tried to juggle about 10 or more subplots. This one cuts down on that considerably so we can now focus on Grace’s subplot. The pastors from the first film also get a small role here as they show up every now and again, but don’t ultimately do much. It’s more for cameo purposes and to acknowledge the continuity of it all. The villains of this film are likable as antagonists. We have the principal who is very excited for this case since it is apparently something that he has been waiting for. He really gets into the battle as he even goes to the home of the student who asked the question and convinces her parents to stand against Grace. They quickly do since they don’t talk to Brooke as much as they should and don’t really understand that this is completely against her wishes.

Brooke is a good character as well. She is struggling with death in her family and this is how she ends up becoming a Christian. The society makes this task very difficult for her though as peer pressure tries to get her to think that this may not be a good thing. After all, her teacher was brought to court and could lose everything just for mentioning the Bible in class and quoting a line or two. That’s a pretty steep price and it will only get steeper as time goes on. Brooke stands strong though and tries to provide Grace with support as best as she can. It doesn’t always pay off, but she does her best. Tom’s a solid character as well. His final plan was definitely super risky, but it shows what a good guy he is. He may not be a Christian, but he did still want to genuinely help Grace. His plan’s risk was mostly all directed at himself so even if it failed, Grace would be okay.

Naturally, Grace is an excellent character. She is given many reasons to quickly take back what she has said and then everything would go away. Everyone advises her to do this, but Grace is courageous and managed to stay strong. It’s certainly a lot tougher than it looks to stand up to adversity without bending to the whims of the world, but it is what you have to do. Your faith will definitely be tested in one way or another during your life. Everyone faces trials and tribulations at some point and if you’ve never experienced one before, then you likely have one coming up. Even for those of us who have already gone through many struggles, there will always be new ones over the horizon. Life wasn’t meant to be easy, but it is all worth it for the final prize of Heaven in the end.

One important thing to take away from debates is that you must be completely confident in yourself. You certainly do want to convince your opponent to become a Christian or to at least consider the possibility that God is real. However, another aspect is just as important and that is to not let your opponent shake you. They will try every tactic possible to convince you that Christianity is false as they point out moments that they deem hypocritical or implausible. The Devil would like nothing more than for you to enter a lot of Christian debates and slowly start to lose your faith in the Word’s infallible truths. It’s why debates aren’t always for everyone and I certainly don’t recommend looking into them any deeper than you are comfortable with. Give yourself time to read the Bible cover to cover on your own and listen to some sermons. Once you have a very clear understanding of it, then you can enjoy the debates. Otherwise, it’s possible that they will try to confuse you and twist the meanings of the Bible. It’s very easy to change the entire context of a passage by starting in the middle or ending a quote before it was really over.

In the end, you don’t want anything to shake your faith. There are many things about the Bible that I don’t understand and many things that I probably can’t even if I were to focus on them forever. You can run yourself through logical loops forever and ever without getting any closer to the true meaning. The Bible isn’t meant to be comprehended in a quick sitting like an average novel. It’s known as the Living Word and that’s because you can always get something else out of it. You may interpret a passage one way the first time you read it and another way the next. You are constantly changing as a Christian and your capacity to understand will always be growing. It’s still hard to actually picture Heaven in all of its splendor and I do think that it is beyond comprehension. It’s something that you will simply have to look forward to experiencing and I can’t wait.

“I would rather stand with God and be judged by the world, than stand with the world and be judged by God.” A solid quote to remember from Grace in this film. This world has a lot of joys and wonders in it as well to counteract all of the evil deeds around the world, but the thought of a perfect world of only joy is incredible. This one won’t last and the people who try to get you to renounce your faith won’t get the last laugh. Not only does God provide an end goal to look forward too, but he gives meaning to life. What would the whole point of our daily struggles be if we simply died in the end? With nothing to look forward too, then we would simply be living for day to day pleasures and that just doesn’t seem right. You always get the feeling that there has to be something more to life and Christianity gives you that something. It’s been great to see more and more Christian films arriving in theaters and I’m proud to support them. Hopefully these films will reach a lot of people and turn their hearts to Christ. Every soul saved is worthy of our celebration because it means that we will have saved another person from Hell. If you haven’t seen this film yet then I completely recommend it, along with its predecessor.