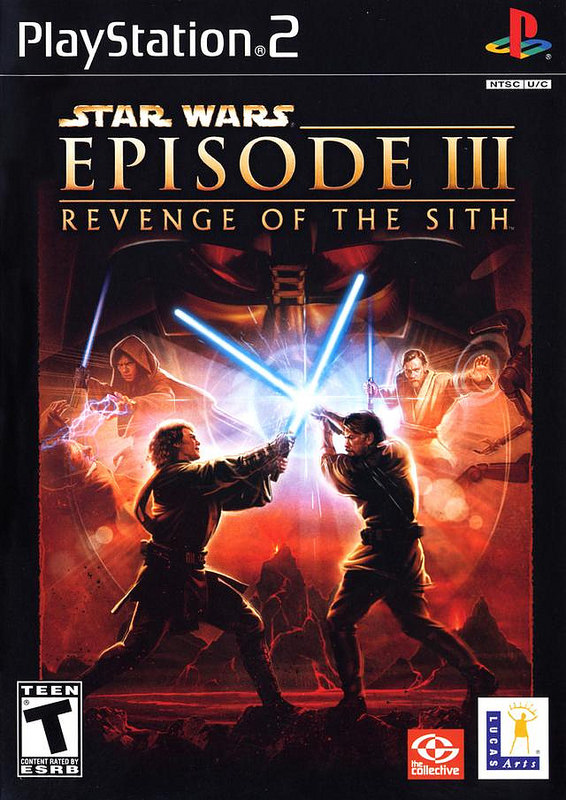 The Star Wars marathon continues! The last game was exceptionally good and set the bar quite high. Unfortunately, this one is not able to quite reach the same level when it comes to the pure gameplay, but the exciting story and multiplayer turn the tables. There are some obvious problems with the gameplay that hold it back just a bit, but it overcomes those odds. While it could be more polished, the rough gameplay actually helps to make the multiplayer mode more interesting. Just press some buttons and hope for the best!

The game covers the events of the third movie. Anakin and Obi Wan continue to do their best to stop the Sith forces and all of the other villains who are around. The main problem is that the head of the Republic is also evil so the heroes have to watch out for threats from both sides and one of their ranks allows the pull of the Dark side to sway him. This game covers the birth of Darth Vader!

I have to say that playing this game again reminded me why Episode III is still the most epic and exciting Star Wars film to date. It may not be the best, but it does make sense why it would be the coolest. This was back in the days where there were many Jedi warriors and lightsaber battles were commonplace. The film had a bunch of awesome fight scenes within and the game adapts them all and then some. It’s something that all of the movies since have lacked and I’m hoping that Episode VIII gives us a bunch of hype battles. I could definitely get behind that and I’m expecting great things from it.

This game starts off rather slow, but quickly picks up once Anakin joins the dark side. Suddenly you’re fighting other Jedi warriors instead of mindless droids. This makes for more enjoyable battles and also an engaging plot. The banter between the characters is brilliant during the fights and you’ll actually like some of the characters more than you did in the film. One warrior who showed up and confidently took on Anakin is safely one of the cooler Jedi warriors. It was a quick moment, but one that separated her from the common masses who were all dying in an instant.

The game didn’t adapt the cool scene where Palpatine took down the 3 warriors though. I had to quickly watch that scene myself and saw a cool video explaining why the Jedi masters lost so quickly. It was simple, they lacked the speed needed to defeat Palpatine. Apparently that is his strongest skill and he can strike so fast that he barely appears at all. Mace was only able to hold his own because he used a forbidden technique that granted him the power of the Dark as well so it was definitely an interesting watch. Needless to say, despite the video hinting otherwise, I’d still take Anakin over them even at his current level.

There are 16 levels like in the other Star Wars game. In addition, there are 4-5 bonus levels and you can unlock Darth Vader for multiplayer mode. That will be your main source of replay value since fighting friends never gets old, but you can also go back to the levels and grab the secrets. Each level has secret health and Force power ups which permanently increase the size of each. I found a bunch of them by breaking things so I imagine that’s how you find them all. The campaign is only around 3 hours long, but couple it with these other factors and I’d say that the game has a fair length. It’s just a lot easier than the last game so it goes by a lot quicker.

The gameplay is purely about hand to hand combat. It may be more accurate to call it Lightsaber combat. You have standard slashes and power moves. There are also your Force abilities of course, which allow you to lift opponents, stun them, and even push them away. I didn’t properly learn how to use the force until the final 2 levels so I recommend trying to learn it a little sooner. Boss fights in this game are quite difficult as they will block or parry just about anything that you throw at them. Ironically, the final boss is easily the weakest one in the game as he refuses to block just about anything. For the others, I recommend whacking them a few times and then going off to heal. (Yes, you can heal yourself in this game) Then rinse and repeat until the job is done. You can usually run fast enough to get this strategy to work. Alternately, you can master the rock, paper, scissors gameplay, but it didn’t make much sense the whole time so I just reverted to classic button mashing. It’s never failed me before so I have always trusted this legendary technique. Your character will gain experience after each level and you can use it to improve your force abilities (Like healing. I highly recommend focusing on that one) and physical abilities. By the end of the game, your character will be close to being maxed out.

The graphics look quite good. The lightsabers really stand out the whole time and they did a good job with the blasts getting deflected off of the swords. It’s aged pretty well and I can definitely see why this game would be thought of as an older Force Unleashed. There are a lot of similarities to be found here and I look forward to trying that game out at some point. The soundtrack is just as good. It has all of the classic Star Wars themes that you may wish for and the battle themes are all intense. It’s definitely a rock solid game on a technical level.

Overall, Episode III may have gotten off to a rough start initially, but it really grows on you. I was sure that it would only be getting a 7 at first, but the plot really picked up and the gameplay is definitely a lot more fun when you’re fighting actual sword fighters. There is a lot less variety when it comes to the gameplay compared to the other title, but how can you not like a classic 3D sword-fighter styled gameplay? It never gets old and none of the levels are painfully long so that also helps a great deal. It’s the kind of gameplay where I also wouldn’t have pictured a multiplayer mode so it’s really cool that it was featured. The cast could be longer, but I guess we’ll save that for an official Star Wars fighting game. The series certainly has enough characters for it by now. I definitely recommend checking out this title. My Star Wars marathon will likely go on a brief break here since I’ll be getting some new games for Christmas, but it’ll be back at some point.