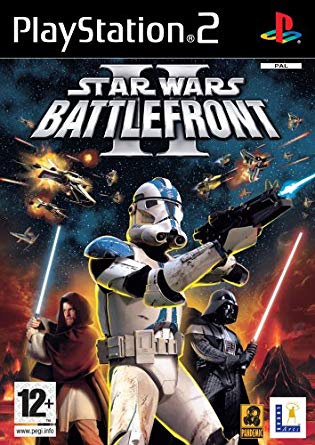 It’s time to look at the next Star Wars title! The first Battlefront was pretty fun with its unique take on the beat em up genre. You had to rely on tactics to win and playing as an expendable agent instead of a super fighter was pretty fun. Interestingly this one actually changes the formula considerably to the point where it now lets you play as the OP Jedi/Sith for a bit and the tactics element is removed. I’d still call it an overall improvement to the first game, but I must admit that I do miss the old gameplay style.

The game follows the exploits of the 501 commander unit. These Stormtroopers are the best of the best in their craft. It turns out that they were at all the big battles in the Star Wars mythos. Each of the levels typically has a short live action clip from the movies to let you know where this takes place and then some narration from the lead as he talks about how tragic the whole thing is. These Stormtroopers weren’t just men, they were a family and all the betrayals really took their toll on these guys.

Let me explain how the gameplay is different from the first game. In this one you have an objective to objective structure. The game tells you to conquer area A, then blow up some things, then take over area B, etc. You have a certain amount of reinforcements so if you go over that then you lose the game. It’s not like the first game where you have to take over all the areas at once or take down all of the troops to win. This one is all about doing things one step at a time. It’s fun as well of course, but the first game’s design was a whole lot more unique. You actually felt like you were a Stormtrooper in that one. Here, you are a lot stronger and won’t find yourself dying instantly the way you would in the other title.

There are also points in the various levels where you get to play as one of the Jedi or a Sith. In this form you have your lightsaber and a lot of force abilities. You feel pretty OP here, but once the section is over the computer will usually find a way to take you out real quick. Once the minions start blasting you even The Force can’t save you from such an onslaught. It’s a fun way to mix up the gameplay styles. While it may take away from the point of the game, I can’t deny that it is satisfying.

A third gameplay mode was added and this one is the weakest. There are various space levels (That are actually skippable which shows that the game wasn’t too confident in them) where you have to try to take down enemy ships and continue your conquest. These levels are pretty unforgiving with the time limit and the controls also aren’t all that responsive. Case in point, you boost using the R3 button but it never worked. Maybe it’s my controller which couldn’t handle that, but it made these levels even more difficult. It’s also hard to dodge enemy fire and I think this part was slapped on without too much effort. The game did not need any kind of space levels and would have been fine just sticking to ground support.

Of course if we don’t compare this one to the first game then the gameplay certainly does hold up pretty well on its own. I’ve always been a fan of third person shooters even if they aren’t nearly as big as the first person ones. The close quarters combat with the lightsaber is also pretty fun even if it isn’t yet all that refined. I think a big reason as to why the Battlefront series is so big is because the shooting aspect is so fresh compared to the other titles. It’s a shame that the name has been associated with the more negatively received games EA pumped out recently, but it can’t stop these classics from still being really good.

The graphics have definitely improved from the first game which is certainly a good thing. They hold up quite well and you’ll be able to see the levels a lot better than you could in the first title. My favorite level is the ship from the first scene of Episode IV. It’s pretty fun to relive that moment. The character designs are all on point and the game never wavers. The soundtrack isn’t particularly memorable though. We get all the classic tunes and that’s about it. I suppose when you’ve got tunes this memorable there is no reason not to use them right?

As far as replay value goes, this game does have more modes than the last one. In addition to the story mode you can just pick up and play random missions for fun. You’ve also still got multiplayer mode. It’s not the largest selection, but it’s enough to get you going. I imagine you can probably buy this game for pretty cheap right now as well so it’s not like you’ll be spending a whole lot of money here. It’s a game that is worth getting and there is definitely enough content to make the purchase worth it.

Overall, Battlefront II is a solid sequel. While some of the decisions it makes are pretty questionable, it does deliver on being a fresh experience. You certainly can’t accuse this game of just copying the first one over. There was clearly fresh development here and having an actual story was also a pretty nice improvement from the first one. On the whole I do give this game the edge over the first one even if I did prefer the gameplay style of the first. It’s not cut and dry as the pure gameplay here is better, but the actual level designs, how you win a level, and durability make the first one’s gameplay feel more genuine. It was the better package, but that alone isn’t enough to combat the fact that the sequel wins in all other categories. Next it’s time to see how the PSP spinoffs fare.