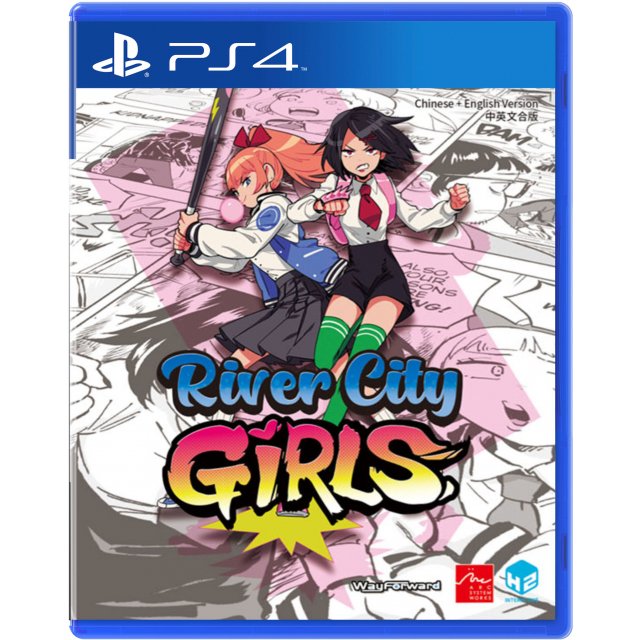 It’s time to look at a pretty recent beat em up game for the PS4. The game always did look pretty solid ever since the first promotions for the game came out. WayForward and Arc SYS working on the game also ensured that it was going to be a great title. It does not disappoint. The game may be rather short but I think you could reasonably expect that based on the arcade style. It’s definitely a really fun game that doesn’t cut any corners.

The plot involves Kunio and Riki getting kidnapped by someone. Their girlfriends Misako and Kyoko get a text letting them know what’s going on so they quickly break out of school and will stop at nothing to find the guys. They may have to tear down the entire city to find them, but that’s fine by them. Whatever it takes they aim to get to the bottom of this. You’ll get a lot of fun backdrops as a result. The heroes go through the school, a mall, a boat, a music show, and more. Each location brings new enemies to beat up.

The gameplay is a very classic beat em up. You won’t have a ton of different moves so it’s about making the most of the ones that you do have. I bought a few moves near the beginning of the game, but I didn’t get anything after that. I’m sure the extra moves after that can be handy, but at the same time some moves will hold you back so watch out. I’m not sure if this is intentional, but take the move where you can pick someone off the ground and hit people with him. This one’s more of a hindrance than a help because it’s the same button as your standard punch. A lot of times I would be getting ready to punch someone and suddenly I’d be picking someone up instead. It’s not exactly a welcome surprise in those cases. Likewise while the Dab looks cool, it does mean you have to be extra precise with your kick so you don’t use this attack instead. I suppose it adds to the strategy although it’d be nice if you could turn off some attacks. Perhaps it’s possible to do so in the dojo or something.

The gameplay is pretty straight forward so you should get the hang of it very quickly. You’ll also see loose weapons on the ground that you can use to slam people with. I feel like the damage is pretty much the same as just whacking someone so you’ll rarely ever want to use it. The best combo actually seemed to be your standard 3 punches into a kick routine. I used that to great effect against every enemy and boss. It certainly paid off. When you’re surrounded by multiple opponents I recommend a tactical retreat. They’ll just land way too many blows if you stick around. Your best bet is to get out of the way and then make your way back towards them. If you hit them all at the same time you eliminate the risk of a counter attack. Dash combos will be your friend.

Each of the bosses also have a set pattern so once you learn that you should be good to go. The bosses are stil pretty tricky though and I needed food items for some of the latter ones. Surprisingly the final boss is pretty easy so I didn’t need any for her. Just keep on hitting her and try to dodge the kick counter attacks. It’s really not that hard to do so and then you’ll have made it through the game.

The story is pretty short and you can beat the game in about 4 hours. Granted there is still a lot of bonus content to explore here. You can go and deal with some extra fights to help your next door neighbor out. Additionally you can break a bunch of statutes and buy all of the collectibles. The platinum seems pretty achieveable here so you’ll just need to invest some extra time in and it’ll be yours. One thing to note is that when you switch characters your levels don’t transfer over so if you’replaying by yourself then I recommend sticking to one character.

As far as the graphics are concerned this game is top notch. Not only are the in game models and backgrounds really great but the game even has fully animated cutscenes. The comic book ones are also really shark and work extra well for the emotional bits. This is an area where the game really excels and the fact that it has full voice acting is really fun. I always feel like that helps to enhance the game even further. Then you’ve got the dynamite soundtrack. There are a lot of great songs to be found here and the sound quality is top notch. The game was basically booming out of my TV in every scene to the point where I’d have to turn the volume down a few notches. The game is incredibly high energy and you can’t go wrong there.

Then you’ve got the writing which is a lot of fun. As you’ve probably guessed the story isn’t 100% serious. You can see how the game pokes fun at the premise quite a bit here and there with the main characters’ proof on why Kunio and Riki have been kidnapped getting slimmer and slimmer. This leads to an incredible plot twist as the game ends which I did not see coming. It really threw all of the classic tropes out the window and flipped everything you thought you knew about the game upside down. It’s just brilliant and the script is really solid throughout the game. With the exception of the next door neighbor all of the characters are pretty solid.

Misako is the tough character of the group who is always threatening to beat people up. She’s actually a bully which several characters comment on. Nobody wants to mess with her because she’ll definitely take you to the hospital. Misako is a fun character to follow even if she may not be a traditional hero. At the very least she is trying to help the guys out so her goals aren’t so bad. Kyoko is a lot nicer but also a little dense in comparison. Things tend to go over her head. She can fight as well as Misako but isn’t as aggressive. Naturally I liked Misako a lot more, but I chose Kyoko at the beginning of the game so I ended up being stuck. From the way the menus looked I assumed Kyoko was gonna be the tough one. Ah well, lessons were learned.

Throughout the game you meet a lot of supporting characters and villains that you have to take down in each chapter. They’re all fun and quirky. I could see a full manga or anime being based around this game and it would be a lot of fun. While you won’t feel bad for the bullies or the villains, you will probably have some sympathy for the school girls who believe they are friends with Misako and Kyoko. They’re really nice at times and help us in our quests, but get absolutely no gratitude. Again this is partially foreshadowing for the twist ending I’d say but you hope they end up finding new friends soon.

Overall, River City Girls is a great game. It is really short which is the only tag against it, but it’s just so high quality that you can overlook this. It reminds me of the average Platinum game which tends to be fairly short, but gives you a lot of quality in that experience. (They do a lot of long games too, but I’m thinking along the lines of Transformers Devastation or the TMNT game. Their franchise titles are usually short) Where else are you going to get such smooth animations and gameplay? The humor is on point here and this is the kind of game that you won’t be forgetting anytime soon. I’d definitely recommend getting it right away. Look at it this way, even if you don’t like it quite as much as I did, it’s not like it’s going to last all that long right?