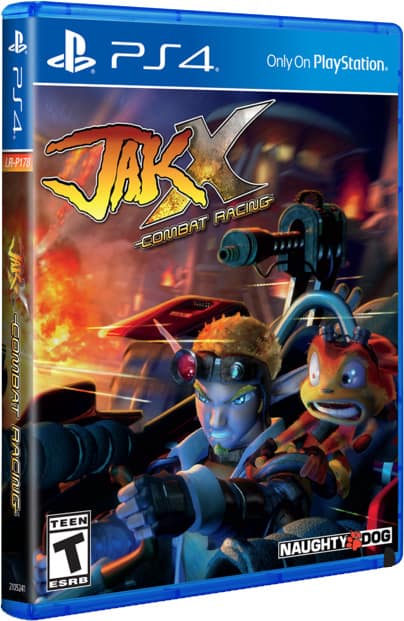 It’s been a long while since I played a Jak game so it was good to see the franchise once more. The racing game always looked like a lot of fun back in the PS2 era so it’s about time that I got to give it a spin. It’s a racing game that’s really worth a purchase because it has the best racing plot I’ve ever seen as well as the best soundtrack. It’s a blast and a half while also being a little longer than the average racing game. That’s a winning combination if I’ve ever seen one.

The game takes place after Jak II and the main characters are all invited to hear Krew’s final will and testament. Since the characters were all involved with his demise in one way or another they decide to attend. Everyone pours a drink and while Jak refuses at first, he decides to drink anyway when he sees that Krew’s daughter drank as well. Unfortunately his initial suspicions were correct as Krew explains in his recording that he has poisoned them all. The only way to get the antidote is to win the world grand prix on Krew’s team. The heroes don’t want to help this guy even if he is dread, but now their lives are riding on this outcome. The heroes swallow their pride and get ready to race.

There are quite a few subplots here in the meantime. On one hand you’ve got the TV announcer who is enjoying the races because he is earning a ton of money. They had all been fixed for many years so with the addition of Jak and friends it is adding some extra spice to the whole event. The gangsters are also watching the races closely since the winner of the tournament will have a very strong standing in the community. It should be noted that most of the people entering these races are gangsters and crime lords.

The actual gameplay is like a typical racing game but with an extra big emphasis on combat mechanics. You obtain many weapons as you go through the course which range from machine guns to rockets. You can also get defensive weapons like land mines and little turrets you can leave behind to blast away at enemies. Then there are boosters to power up your boost meter and little health packs. Usually you will have to choose what to go for as when you get to the item points in the race there will be an option to grab either a weapon or a booster for example. The items are pretty frequent so you can always just alternate or something like that. The best weapon in the game is the satelite as everyone in front of you instantly crashes. It’s an amazing item but one you won’t likely see very often.

My recommendation is if you’re in first place then always go for the defensive item or the booster. You can use any defensive item to block a rocket which is very handy and boosters help you stay in first. If you’re not in the lead then always go for the attack item since you want to be back up there as soon as possible. The races are about 4-5 minutes at times so you don’t want to lose since you’ll need to start it again. In each world you need to collect 50 points to play the Grand Prix. 1st place is worth 3 points, 2nd is 2, and 3rd is 1. SO if you get a lot of 1st places it’ll help you get through the game a little quicker. I never lost a Grand Prix so I don’t know if you’d have to replay the whole thing or not, but each Grand Prix is 3 races so that would be a lot to replay.

Not all stages are typical races though. You’ve got 4-5 other kinds of gameplay. You’ve got time trials where you run into clocks to keep your time up and you try to complete the stage as quickly as possible. Then you have Death Races where you have to blow up a number of cars before time runs out. There’s Traffic where cars will run at you and you have to run through them as you get to the end. Death Matches have you try to earn 10 points in eliminating other players. Then there’s Artifacts Race where you scramble to grab them before the other players and capture the flag where you try to get an orb into your base. There’s also booster mode where you’re at top speed and have to power up as many orbs as you can.

There’s a lot of variety here so the game has quite a lot to offer. It’s clear that this racing game had a lot of effort behind it. The graphics are top notch and I’m glad that they went to the trouble of adding so many cutscenes. It has more of them than the average platformer game which is pretty cool. Then you have the soundtrack which is great as there are a lot of rock themes. Every time you unlock a car you get a great tune and the stage themes are excellent as well. It really fits in with the game’s atmosphere.

The main story mode should take you around 7-8 hours I’d say. After that the main replay value will be trying to get all of the stars and maxing out each car. There’s not much reason to do the latter but I’m assuming you get something for doing all cars. Ironically powering up a car can backfire at times as it’ll go too fast and you’ll crash so my advice is to be careful with it. I did a lot of upgrades in the final world and it nearly cost me everything.

The writing here is top notch so all of the characters are entertaining. There are a lot of twists in the stories and a fun cast of characters. It’s nice to see all of Jak’s friends show up. Not all of them were the nicest to Daxter, but it’s hard to be when he’s always lying and you can’t tell if he’s on your side or not. The opening cutscene of the game is a good example of this as Daxter starts on one of his crazy adventures again. Jak’s appearance ends up hurting Daxter’s credibility, but it was already shot. You really have to experience the story to see why it’s so great. Jak’s the standout, but the reporter and Jak’s friends are also pretty entertaining. They all don’t tend to get along very well but in their defense, being poisoned does spoil the mood.

Overall, Jak X is a terrific game and it reminds me of why Jak is such a great character. He’s the best Naughty Dog lead for sure. Pretty much every line he gets in this game is terrific. He’s really not about to get intimidated the way a lot of others characters do when the villain shows up. Now that’s what I call talent. If you don’t have this game yet then you need to change that. It’s a lot of fun and really changes the way you think about racing games.