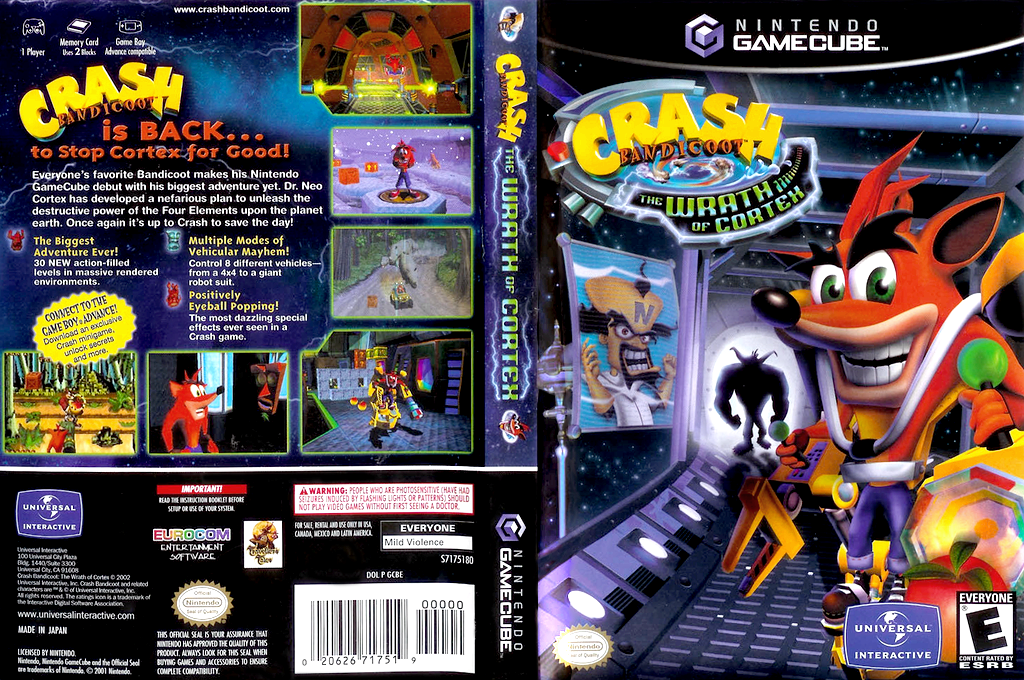 It’s time to take a look at another Crash game. I actually completed this one before the GBA one but that one was so much shorter that it made sense to just churn the review out real quick. The HD Collection for Crash was pretty fun so I figured it was about time I got the next installment. The Wrath of Cortex does hold up pretty well to the others although I don’t think it beats any of the first 3 one on one. While the gameplay styles are quite varied as Crash is known for, some of them are definitely weaker than others. This results in weakening the overall package a bit in the end.

The game starts with the mask reprimanding Corte and the other villains once again. They have failed him for the last time so he gives them yet another shot to win back his good graces. Cortex is pressured into admitting that he has built the ultimate weapon to beat Crash. It’s a dark prototype known as Crunch and he basically is Crash except a whole lot more powerful. Cortex has also awakened the immensely powerful Elementals who once brought the planet to its knees. Can Crash really stop such a powerful alliance?

I always like starting the game off with a good villain meeting. This way they all hype each other up and it works out quite well. That being said, most of them don’t actually get to fight in this one which is a bit iffy. What’s the point of a big villain meeting if they aren’t actually going to fight right? They all returned for the GBA game and some of them got to fight there, but I was expecting everyone prepped and ready for this fight. No matter, it was still a pretty fun opening cinematic and I’m always going to give a game a thumbs up for including them. Cutscenes are something a game should always have if you ask me.

The main gameplay here are the 3D platforming levels. You run and jump over obstacles. Additionally you can use your spin move to defeat most enemies or a power slide to go right underneath them. It’s definitely a very useful technique and I recommend it against all of the human agents. It’s more trouble than it’s worth to spin on them. A lot of the time you can just breeze past them though. In this game there is no real benefit to fighting them all off so I would say don’t bother. What’s the point of attacking an enemy when you could just walk right past them? That’s the way I see it at least. These levels can definitely be tricky. A lot of time the best thing to do is just stop and survey the level instead of continuing to run forward.

As I mentioned there are other kinds of levels here though. Another one is when you are in a plane flying across the world sinking ships and space stations. These levels are a lot of fun for sure. Just keep on blasting and you’ll be through it with ease. A lot of the time you don’t even need to worry about the ships behind you. Try to tune out the super loud sound of motors behind you though. It can get extremely loud next to the other sounds and music for some reason to the point where you may want to lower the volume a bit. Another kind of gameplay is when Crash puts on the mech suit and starts blasting. It’s a bit clunky so I feel like the game added it near the end. It’s not terrible but I do think it could have been a lot better. The levels don’t show up often though so I wouldn’t really worry about it.

Then we have the underwater levels where you’re in a ship or swimming free reign. These were my least favorite levels in part because it is very hard to turn. That means if an enemy suddenly appears out of nowhere then you are basically out of luck. Struggle as you may, but in the end you won’t be able to dodge. I remember losing quite a few lives in this battle. There are also the Monkey Ball levels. This felt the most random to see, but it was nostalgic. These levels were pretty decent although there was one where the final maze was a bit much. It wasn’t even hard, just time consuming to check every path until you found the right one. If you picked a bad path, well you wouldn’t know it til you got to the end of it.

The graphics are pretty solid here. The final levels get really dark but I think that’s more on my TV than the game. I did prefer the earlier worlds to the final one though. The final world felt like it dragged on a bit next to the others. One thing about levels is you never want to have a section where you have to wait a lot. Sections with waiting means that the second time around won’t be nearly as exciting and if you die a lot then it keeps lowering and lowering the hype. This was mainly an issue when climbing as Crash climbs very slowly. The souundtrack is pretty decent though. There weren’t any memorable tunes, but I had no issues when playing the game. It all felt pretty appropriate.

The game’s length is pretty short. I’d say that I cleared the game in about 2 hours. The game wasn’t very clear on how to save so I did have to beat the first 3 worlds twice. If you count that then the game lasted about 3 hours. To save you have to walk over to a big TV in the hub world and click on it. Definitely make sure you do that before turning the game off because otherwise you definitely won’t be thrilled to have to redo all of your work. At least I was able to see how quickly I could adapt because the second time I didn’t die nearly as much. It felt like I had really improved on those levels.

There is also a good amount of replay value here as you can try to get all of the collectibles. There are a ton of them to get on every level so if you do that then expect this game to last quite a bit longer. That’s really it, but I’m assuming you would unlock something pretty good for doing that. It would be a shame to do all that work and not really have anything to show for it. Surely the game wouldn’t even dream of doing that…right? If it did then you are definitely free to feel a little disappointed.

My only real complaint with the game aside from how the saving works is that in some levels it can be a bit of trial and error at the beginning. There are some obstacles you couldn’t possibly know are there until they suddenly appear and squash you. In particular this happens quite a bit in the underwater levels. You know where they are the second time but it’ll cost you a stock each time you find out. That’s a lot of stocks in the balance.

While this complaint doesn’t affect the score quite as much, the sound settings in this game as pretty odd. The cutscenes are all extremely low so you can’t hear anything til you raise the volume. Then the actual music and sound effects in the levels are decently loud. Finally you have the aerial levels where the sound effects are incredibly loud. Same for the electricity in ground levels. You can never have your TV at the right volume because the game keeps changing things up on you. I can’t think of another game that had this issue to such a large degree so that was definitely interesting.

Overall, The Wrath of Cortex is a pretty fun game. It’s a nice sequel to the series even if it doesn’t really do a whole lot that the first 3 didn’t. I’m always glad to see another Platformer and especially on the Gamecube. I’d recommend getting the game. The price is pretty good right now and who doesn’t want to revisit the world of Crash right? Sometimes you gotta just take the plunge and see where it takes you. I’ve got one more Crash game to play but then after that there might be a bit of a delay before I get more. I’ll definitely round them up at some point though.