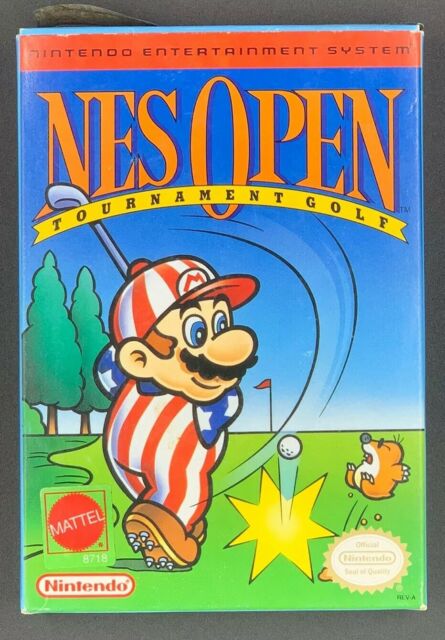 It’s time to look at a classic NES golf game. Golf is one of those games that is hard to make all that fun even in modern titles. The only one where I could say I really felt pumped up was the Mario Golf game for Gamecube and even then it got stomped by the other Mario sports. Needless to say I wasn’t a huge fan of this one either. I do see that some decent effort was put in here but it still wouldn’t be able to keep me in there once I’m done with a tournament.

When you boot the game up you’re given a screen with Mario and Peach getting ready to be crushed by Luigi and Daisy. I assume it’s Daisy at least but admittedly she looks quite different here. After that you see the various game modes. To this title’s credit, there are actually a few different modes when a lot of these games would just have one back in the day. You can jump into a tournament, free play, or a single player run through of all the holes. Naturally I went for that one, I wasn’t about to have to watch the computers throw me around when I was just starting right?

The controls are not too crazy once you get the hang of it. You move the stick in the direction you want to hit the ball too. Once you do that then you tap the a button twice when you’ve got it in the right part of the moving bar. From there you just try to angle your hits and select the appropriate power so that you get the ball to the flag in as few hits as possible. This is one of the few games where you actually want to have the lowest score possible. The higher score you have the worse you played the game. You definitely don’t want to see a +9 as that is about as bad as you can be.

The graphics here are pretty fun. Not surprisingly since Nintendo was really the ones behind this game it looks a lot better than most of the other NES titles. When they throw Mario in it seems like Nintendo really tries to give the game an extra shine to it. The soundtrack is also very peaceful. You feel like you’re ready for action and to have a good time. That’s the ultimate goal of the games right?

There’s a reasonable amount of replay value here since there are a lot of different stages. You will probably need to also replay the stages quite a bit to really get good and to hit your rhythm. It’s not something that will happen overnight after all. I averaged around a +6 for each hole so I got a ways to go. Ideally you want to be around a -1 or -2 for them to really secure the win. The toughest part about golf for me has always been all the different variables. You have to account for the wind and you have a ton of different clubs to hit the ball with and they all have their own range. What this means is basically no matter what you’re going to have to do a lot of memorizing to know what you want to do. Mario Golf handled this well with giving you a preview of how the shot would go while this one plays it a little more on the level. You just need to know the yards left to go and plan accordingly.

This is definitely a tough game so you can expect a good challenge. Of course with the rewind feature you have backup to an extent but either way this is not a game that you can expect to beat very easily. It’ll take some time and you’ll have to see if the game is fun enough to spend that time. At the very least I am glad that Daisy got into the picture a lot earlier than I would have expected. I’m not sure if you can play as her, but I certainly hope so.

Overall, NES Open Tournament is definitely a game you don’t want to miss if you reeeeeeally like Golf. Otherwise I’d say you should just bypass this one. There are a ton of other quality NES games to enjoy on the service so there’s no need to stick with one for very long if it doesn’t hit it out of the park for you. I don’t think there’s a whole lot more they could have done with the concept here so I’ll give them props for the attempt. That being said, Golf just needs something to give the games a little more pop in their steps.