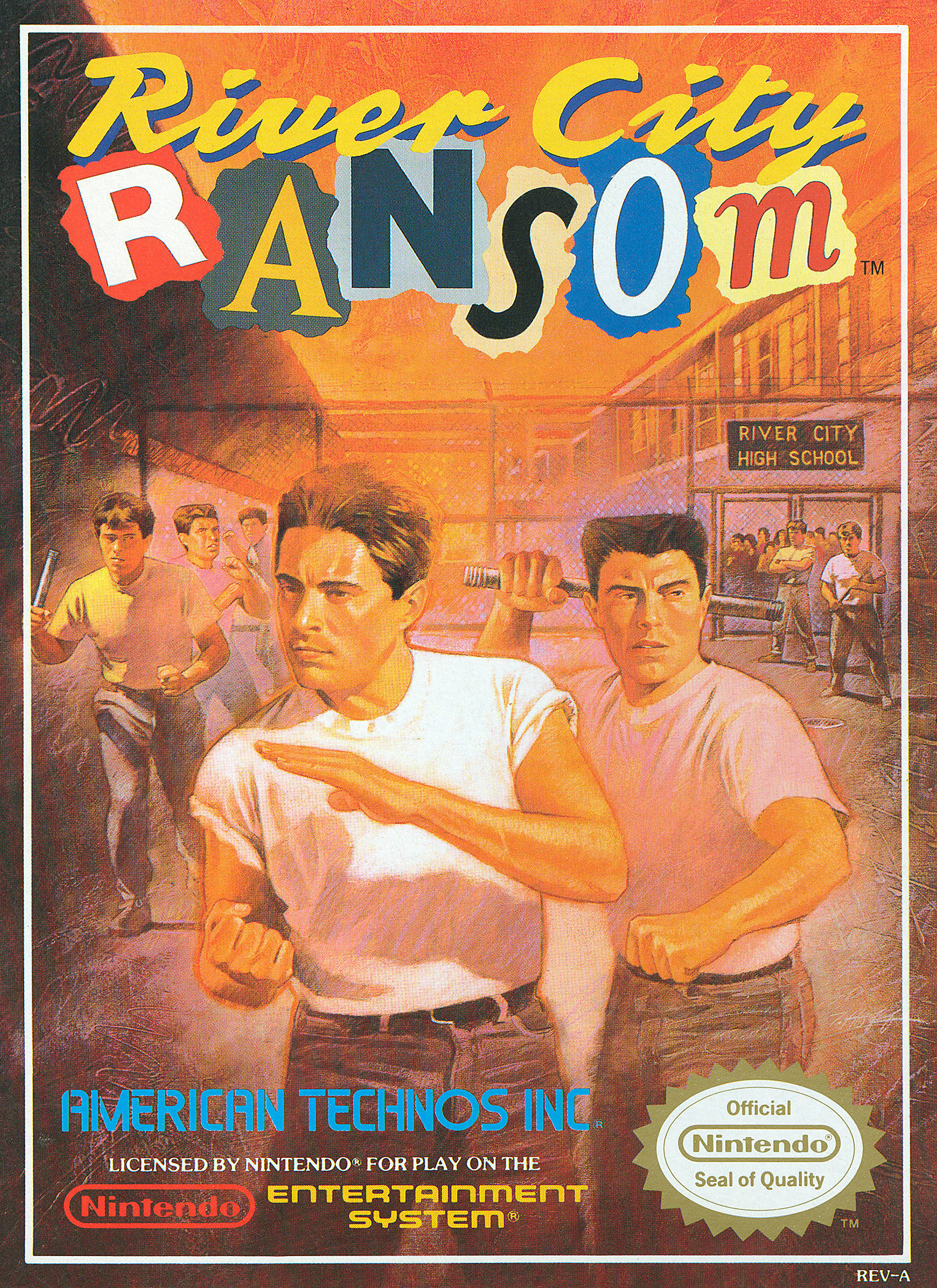 It’s time to look at the next NES title. Slowly but surely I’m cranking down on the rest of these NES games. At the time of writing this I have around 22 left I believe which is pretty good. At this rate I should have them all done by the end of June and then I’ll be eagerly awaiting Nintendo’s announcement that they are adding more. The other good news is that now I’m getting to the big games. Gone are the sport games, now I’m up for more of the plot type games or at least ones that have more in the way of gameplay.

I recently played River City Girls so it was pretty fun to go back and play the original. This is a game that has definitely aged quite well. First off we’ve actually got a plot with cutscenes here. The main character’s girlfriend was kidnapped by a bunch of thugs so the hero is off to save her. Along the way he will have to defeat 9 different gangs so it’s going to be a long day for the hero. Fortunately you can utilize just about everything you come across as a weapon and you also pass by a lot of malls to replenish your health.

One impressive thing about the game is that it has a full open world much like River City Girls. The game isn’t linear so you choose where you want to go first. Each area has a boss once you beat a lot of the minions and presumably once you beat all 9 then you will clear the game. Open world is a concept that has always been a lot of fun although there is still something to be said for a more linear experience. I wouldn’t say that either is better as they each have their positives but open world can be a little more dangerous if you have the potential to get stuck. I’ve had that happen to me in the past and it was pretty dicey. That actually happened in this game as well.

See, you don’t actually seem to trigger the boss if you bypass the henchmen. After I beat the first boss I figured, why not run to the school since that’s where the hostage is being kept right? So, I made a beeline over there including jumping down from a cliff and entering a passageway. I made it to the school, but nothing was happening even after I beat all of the henchmen a few times. So, I had to go back and clear the other levels but the problem is that you can’t actually go back once you cross the cliff. It’s an interesting design choice and one that seems a bit fatal depending on how fast you go through the game. Perhaps there is a way to get unstuck there and if so, kudos to whoever figured that out. I was going to go through the whole game but since it’s not really linear anyway and finding all of the bosses would take a while I figured I’d stop here.

There are few games where I would explore a whole labyrinth to find answers and one of those would be Metroid for honor. At this point that game’s personal. River City Girls took this game’s premise and really ran with it though. The best new addition that game had was a big map system. If you ever got lost you could consult that. This game has no map which is understandable since that would have been difficult back then but I would have definitely enjoyed it.

The combat is definitely a lot of fun here. You can really hit people with combo after combo, but the computers don’t just sit there and take it either. They actually block quite a lot which is pretty impressive and when they lunge at you it can be hard to react in time. You definitely have to stay on your guard. I really like the Baseball bat and highly recommend equipping it as much as possible. There are a ton of stores so you definitely want to buy food at them. Not only does it increase your health but it can also increase all of your other stats like attack power and speed.

The graphics are definitely pretty solid. I like the character designs for the various characters. They look tough as you’d expect such a character to be. These guys are clearly not messing around and that’s a good thing. Whatever threat comes up, the hero is ready to squash it. The soundtrack is also pretty catchy. It’s nice and fast paced and definitely gets you into the moment.

Overall, River City Ransom is definitely a pretty fun game. The fact that it has a real story is pretty cool and the gameplay is pretty solid. There’s a good amount of content here to playing through the game could last you an hour or two. The only thing holding is back is really the lack of a map feature and the point of no return. Just make sure you take out all of the goons in each area without skipping any and then you should be fine. Slow and steady wins the race as always.