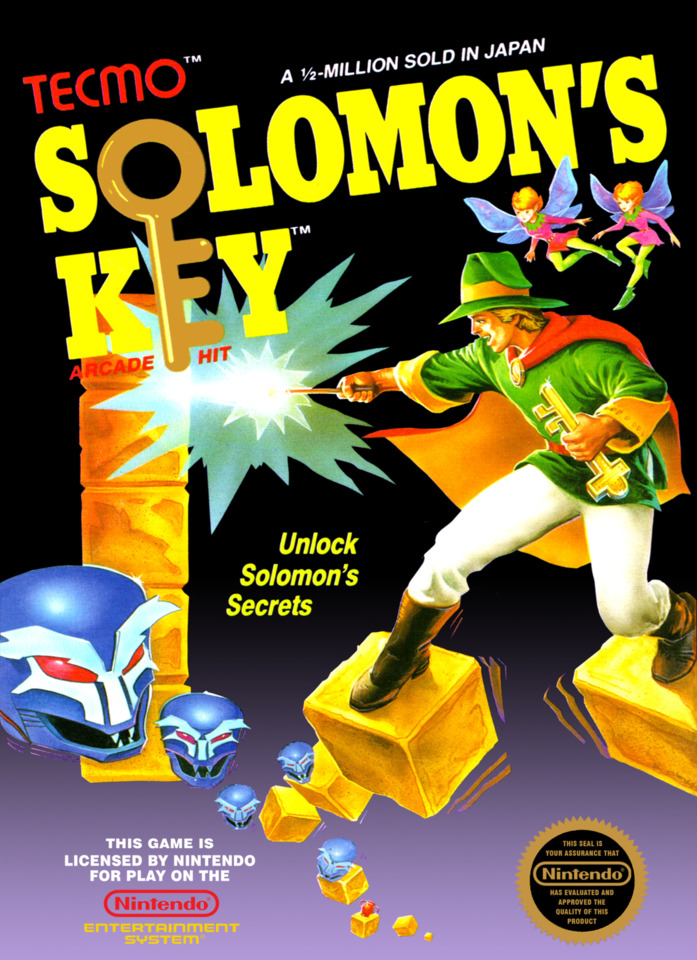 It’s time to look at a pretty big puzzle game for the NES. Solomon’s Key is one of the titles that looked pretty fun and I saved it for the end of my NES run. Outside of the more RPG type titles the NES collection is now done. Solomon’s Key is a pretty fun way to end off. There are a lot of puzzles here and it’s pretty fun to figure out a way to clear the level. Due to the nature of the game there are many different ways to clear the stages although I imagine that near the end of the game you’ll have to follow more of a set strategy. The game certainly does start to get pretty difficult towards the end.

The idea of each level is to make it to the key and then to go through the door. Both of these items are strategically placed somewhere in the level. Usually to taunt you the exit door will be right near the entrance so you know it’s super close but it doesn’t matter until you get the key. The way you navigate the level is by jumping and summoning boxes. You can make a box appear which you can then jump on and make more boxes appear. There does seem to be a limit to how many boxes you can create at a time, but it’s fairly high up and shouldn’t matter. Either way the enemies eat your boxes very quickly. In a lot of the levels you have to go very quickly but also try to take into account the fact that the enemies will definitely not let up as they try to take you down.

It’s a lot of fun trying to outwit the computers. You have to predict what they will do ahead of time. It’s a great brain teaser and I made it pretty far through the game. I didn’t quite beat all of the levels as I stopped around halfway but it would be a great conquest for someone to beat them all. The dificulty noticeably spikes as you go through the game. While the first few you could just power through with experienced platforming that just won’t cut it later on. One thing I would try to do is box the enemies in but that only works on the first kind of enemies. The rest of them slice through your blocks like butter so it’s almost pointless to even try. It can at least slow them down though.

The toughest level for me was one where a lot of statues are constantly shooting fireballs at you. It’s a straight forward level design wise as you just have to climb up around 12 stories without a ladder. Naturally this means you will be using your blocks but as they are getting destroyed right as you are creating them you have to keep using others as a shield. The difficult part is as you go up you can only make a shield on your level so they can shoot out the ground from under you. Ultimately what I did to get around this was to always create in sets of 2 and 3 so there would be enough ground for me to keep climbing up. It took a ton of tries along with different variations of the plan but ultimately I made it through. The game definitely feels very rewarding after pulling that off.

The graphics are definitely fun and pleasant. This is a game that has aged rather well. Part of this is because there aren’t a lot of assets or characters on the screen so the developers could really focus on the ones they did have. The core gameplay is also timeless since this is a logic puzzle game that anyone can get behind. The music is also decent although I dare say a little too peaceful. Throw in some electronic music or something a little more rock based and that would really help you begin to crack the code. If you ask me that would be the perfect way to give the game a little extra boost that it could use.

Overall, Solomon’s Key is pretty fun. It’s also longer than the average NES game with how many levels it has. You can really test your puzzle abilities and with the NES Access States so you can always save your progress and try more the next day. That’s something I’ve always really enjoyed about the online state. I look forward to more games being added at some point. I’m guessing we already have most of the games available but certainly there are some more out there right?