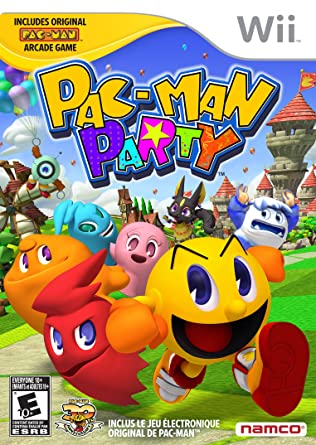 A lot of people may not remember this but at one point Pac-Man was a global icon and had the most popular game of all time. He’s been largely abandoned in the gaming world but has still obtained a solid collection of games. Pac Man Party is one of the last ones that I needed to get and I can confirm that it was worth the wait. This is a game that’s a blast and a half to play as long as you’re playing with friends. The story mode is more on the weak side. It’s a step above most party games but falls far short of Mario Party. That series will continue to be known as the best and at this point I don’t see anything passing it anytime soon.

The basic story is that someone has stolen Mr. Cookie’s prized recipe of how to make the cookies. He begs Pac Man for help on this. The hero agrees to help of course and quickly figures out that the ghosts have taken the recipe. He asks them politely to give it up but they refuse. The only way they will give it up is if Pac-Man defeats them in various rounds of the cookie game. Pac will have to play hard to win this match, but will the ghosts really end up keeping their word? It’s going to be tricky.

The story at least shows that Pac is still a guy you can count on. He’s going to a lot of trouble to get the recipe back. He has to deal with some powerful monsters as well as each of the 5 worlds has a boss creature at the end to defeat. These range from the Kraken to giant mechanical bears. One thing’s for sure, Pac-Man can’t let his guard down. The ending of the game goes in a pretty interesting way that’s sort of wholesome even if it’s not what you may have been hoping for. It’s not particularly long at around 5 hours so you shouldn’t have a problem beating the game. Pac-Man Party is also unique in that the story will end whether you win or lose. There will just be a slightly different cutscene that ends up playing in that circumstance.

How the game works is the 4 players start out on the board. They roll the dice using minigames rather than just hitting the dice. This lets you go across the board. If you land on an empty space then you automatically build a castle there. If you land on someone else’s castle then a minigame starts. If you win then you take the castle and if you lose then you have to pay the winner in cookies. The amount varies on the level of the castle. You win the overall match by earning a certain amount of cookies (Usually 12,000) and then making it back to the starting point. The maps are all circular so you keep looping around until you have the cookies. The best way to earn cookies is to have a lot of castles and then have the computers challenge you. Of course, you have to actually win the minigame or you could go from having 5 castles to 0 in a single minigame.

The A.I. is actually pretty good in some of the games. It’s interesting because in some games they are excellent and in others they are pretty terrible. Maybe the programmers had a hard time making them good without being OP in those so they just left it at them being pretty weak. Still, as the game goes on they should give you a pretty good challenge. Each player has a few super cookies at their disposal. You start out with 3 and can earn more. If you use them during a minigame they amp you up and greatly increase your chances of winning.

I highly recommend saving these for battles where you are defending a castle since those are the most lucrative battles. You will find yourself wishing you had kept a few on hand if you spend them all early on. When a computer is attacking another computer’s castle, don’t bother with the cookies. Win or lose you don’t earn any points so it doesn’t matter much. Your only consolation is you get a super cookie for coming in first so using one to get one wouldn’t make sense. The main problem with this system is that the battles can take a while. Keep in mind that the story took 5 hours and there are only 5 stages in the game. That puts each map at about an hour which is pretty crazy for a Mario Party setup. There should be a specified amount of turns or an easier way to get points. There was one world where I got enough points right after I passed the start spot so I had to wait another full lap to win. As the games goes on you get more battles per turn so it took forever to make it. I don’t think that’s particularly good game design. It reminds me of PS All Stars, it had a unique gimmick but the gimmick just wasn’t good.

There are a lot of minigames so I’ll just quickly talk about some of the highlights. You’ve got a classic jumping minigame where you have to time your jumps as a giant hammer is trying to swing away at you. This one’s all about timing and makes for a nice competitive battle. You’ve also got the classic minigame where you’re on a ball and have to try to roll everyone off the mountain. As the game goes on parts of the ground will begin collapsing as well so you definitely have to stay sharp. There’s another minigame where you’re in a soda cup and have to get to the top. As you’d expect a great deal of the minigames are food related. That does help to distinguish the games from most party titles since they don’t deal with food as much.

The graphics are pretty nice though. This is a very good looking Wii game that holds up well to today. The character designs are on point and I like the level layouts as well. The minigames have a large variety of backgrounds and themes. I feel like a good amount of budget was actually put into this game. The music’s more forgettable but I suppose that’s to be expected. There’s also a good amount of replay value to work towards as the game has its own built in challenge system. If you clear all of the challenges then you’ll feel pride and satisfaction. I got a few but wasn’t about to go in again to get the rest.

Overall, Pac-Man Party is a fun party game. At its core that’s where you’ll find the most enjoyment. This kind of game definitely doesn’t seem like it was really made with story mode as the main focus so if anything I’m just glad it has one. A lot of party games don’t have a full story so that’s pretty nice. There’s also a good variety of minigames so you’ll rarely if ever play the same one twice in a battle. A lot of them do feel pretty much ripped out of the Mario Party series but I suppose at this point almost every kind of minigame has been done. At least the execution isn’t bad considering this is on the Wii so we have some motion controls. A lot of the games use the Wii Remote sideways so it feels more traditional. I’d actually say that most of the minigames are downright fun. The only one I disliked was curling since as always that minigame feels like it takes way too long. If you want to enjoy a solid party game I’d check this one out.