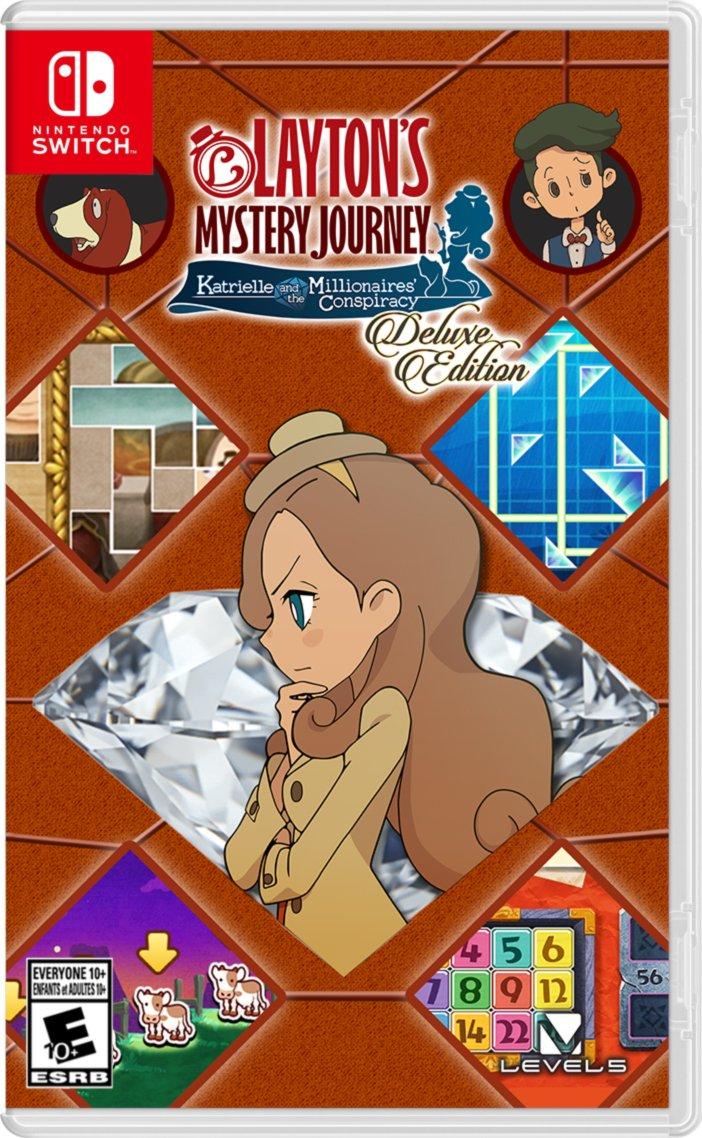 It’s been a while but I finally managed to get a hold of the spinoff which concludes the Professor Layton series. Someday I hope we still get another Layton game though since I don’t want the franchise to end. It’s pretty interesting to be playing as a different character for once. The developers did a good job of making sure that this one also feels very different next to the main games with new mechanics and such. Ultimately the changes aren’t enough to help this game match up to the earlier ones but I did end up liking Katrielle well enough. She isn’t afraid to talk back to the other characters more than the polite Professor Layton would.

This game has more of an episodic plot compared to the main Layton games which had a core story. Still, there is an overarching plot in the background. Katrielle is the head of the Layton Detective Agency although not too many people know about her yet. She has a dedicated assistant named Ernest who is always ready to attend to her every whim. One day she bumps into a dog that she nicknames Sherl. Sherl isn’t pleased about this since he doesn’t think it’s a name for a guy, but Katrielle can’t be bothered with this. She also isn’t particularly impressed with the fact that he can talk. She’ll solve his case at some point but she’s more interested in helping the community with their issues as well as trying to find Layton who vanished many years ago. As Layton’s daughter, Katrielle has dedicated her life to finding him. She’ll have to put that on hold though as she solves various crimes fro theft to murder. Will Katrielle ultimately build an even bigger reputation than Professor Layton?

As with the rest of the series the main gameplay revolves around puzzles. As you go through the campaign the characters will often have various puzzles to challenge you with. There is a lot of variety with the missions as some will be solving a maze, math problems, logic questions, etc. It’s always a pretty fun way to test your mettle. There are well over 100 puzzles but to clear the game you only need to clear around 67. That leaves a lot of room for replay value after you complete the game. You are bale to warp between the various cases and the game even tells you exactly how many puzzles and hint coins are left in each section. I appreciate how thorough the game is in its reporting.

There is one thing that holds this game back compared to the other Layton titles aside from the story though. That’s the puzzles themselves. The movements in the puzzles ask you to be way too specific at times. That’s my main issue, the very first puzzle took me a while to complete as it is. I think they needed to allow for a bit more movements here. I think it may have been something about the transition from 3DS to Switch I imagine. The puzzles occasionally have an issue like that but for the most part the rest are all solid so I would hardly call this a big issue or anything like that.

Katrielle’s mission to find her father is probably the most engaging part of the story so the whole time you’ll be waiting for that to come back. It ties into the ending pretty well with a rather massive twist. It definitely makes you double think everything that has happened previously. If you’ve played River City Girls then you’ll understand the effect. She’s definitely a solid lead even if it feels like she may be taking advantage of Ernest quite a bit. They’re really close friends but she certainly must realize that Ernest doesn’t quite see it that way. I imagine that plot will likely move a bit if we ever get a sequel.

As for the talking dog Sherl, I’m not totally sure how that’ll work out. My personal theory is still that he is Layton because that would be pretty cool. His personality will certainly have changed quite a bit but memory loss will do that to you. Meanwhile Ernest is a solid side character. He’s a little older than Luke so you can take him a little more seriously but puzzles definitely isn’t quite his thing. He’s more helpful to Katrielle in daily tasks and such than with his puzzle skills. Another supporting character is Inspector Hastings who is pretty solid. You do feel like he should have more confidence in Katrielle after a while though since she’s always saving his career and reputation. Without her he would be quite doomed.

The various cases are pretty fun. In general the rest of the supporting cast is a bit on the weak side but since the core characters are good that’s the important thing for the cast. Meanwhile the graphics are definitely really good. I was glad to see the full anime cutscenes make a return here. Level 5 has been very consistent with including those. It always helps to give the game a bit more of a cinematic feel to it and I’m always going to give this kind of thing a thumbs up. The soundtrack has some new tunes and some returning ones. The music is pretty fitting with the game’s setting and keeps things rather peaceful.

The main campaign should take you around 15 hours or so and I think you could probably add another 6-7 in order to complete everything in the game. There’s definitely a lot of content here. Even outside the puzzles and main story experience you have a ton of different minigames. I didn’t really try them out but there are many options. I think there are more in this game than in any of the others which is pretty impressive. Every bit adds up after all.

Overall, This Mystery Journey makes for a pretty solid adventure. The title is a bit surprising since it gives you information on a plot point that you don’t otherwise learn about (or even hinted at) until the final chapter. I suppose it’s always good to have some foreshadowing though. At the end of the day this is a pretty pleasant story with solid characters and good gameplay. I’m not usually much of a fan of puzzles in games but I’ve found that games built around the premise tend to be better. You can’t even compare something like the Layton adventures to Flip’s Twisted World. Now all we need is a Katrielle and Professor Layton crossover and we’ll be set. If you haven’t gotten this game yet then you should definitely check it out.