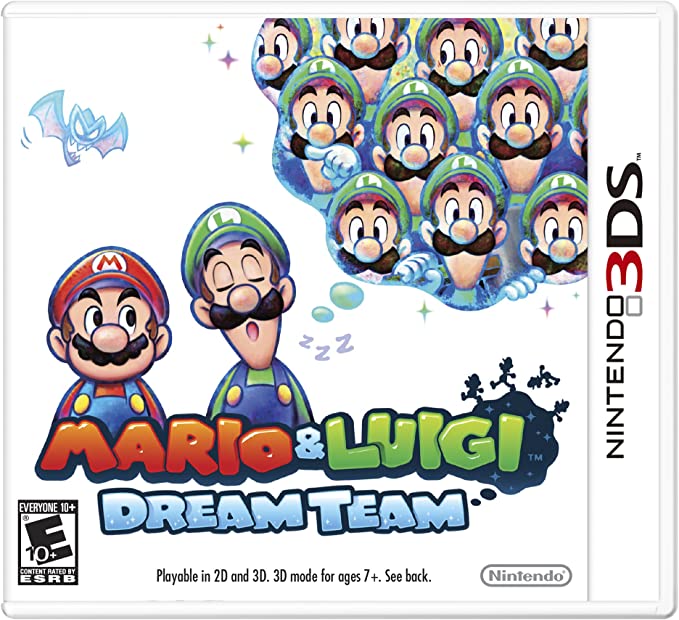 Mario & Luigi has been a fun series to play through. Each game throws in some new elements and adds in another villain for the heroes to go up against. Dream Team doesn’t manage to capture the amazing dialogue of Bowser’s Inside Story though and the plot isn’t quite as hype as Partners in Time. It gets close at times and the climax is great but ultimately the game drags itself a little too long to reach that elusive next level of gaming.

We start out with the Mario bros and Peach being invited to a resort for a vacation. It sounds innocent enough but it turns out that there are some shady circumstances at work here. On the island all of the Pillows around are actually sentient creatures from hibernation. A villain known as Antasma intends to bring the world to darkness and cause everybody to go into an endless slumber. Clearly he is not the kind of villain you want to mess with. Starlow is back to help out but the heroes will need more than that if they are to win. This villain manipulates dreams but fortunately Luigi is good at going to sleep. Now the heroes have a fighting chance.

It’s a pretty interesting plot at face value and this is also a perfect way for Luigi to contribute. In the real world he may not be as skilled as Mario but there is nothing to say that the same would be true in the dream world right? There Luigi’s power is matched only by his imagination and he gets some pretty solid moments. At times you have “Mega” boss battles like in Inside Story. Only this time instead of Bowser turning giant it’s Luigi who does this. It makes for some fun visuals like when Luigi and Bowser have an actual fist collision. Luigi’s also a lot more confident in his dream world as he consistently steps up to help Mario out. Imagine if he was always this secure, I think Luigi would be a great ally to have around.

In the real world he is still as nervous as ever though, but at least this allowed him to showcase some more of his skills. In the dream world Luigi also has a lot of extra skills such as the ability to turn into a wrecking ball, tornado, etc. The game uses this as extra gameplay mechanics as you use these abilities to solve puzzles. The gameplay in the real world is a straight forward platformer with turn based gameplay while the dream world adds a lot of different styles like the ability to slow down time roll over enemies, and things of that nature.

It’s pretty fun how both worlds have such different gameplay methods. Both are pretty enjoyable to be sure. The actual combat is also as good as ever. The only thing I wasn’t a big fan of were the motion control aspects of some of the attacks. You can’t exactly play lying down when you have to be spinning around. Still, it’s not very often and you can always choose not to use those attacks and stick to non motion ones. The game’s difficulty level is considerable though so you may not be at liberty to do that. Dream Team does not pull any punches, especially with the final bosses.

This is where you really need to make sure you are good at dodging, have a good badge setup, and are at a high level. I had to do quite a bit of EXP grinding near the end of the game and it still got close. The best badge set to have here is either the one that makes you invincible for several turns or the one that just freezes Bowser for multiple moves as well. He can’t go on healing himself if he isn’t able to move after all so it’s definitely a tactic that works nicely.

As with previous Mario & Luigi games my one main negative here is just that leveling up can take so long. I wish the enemies were a little more balanced with the EXP. It’s something that the game series has always struggled with next to most other adventures. Not sure why but the pattern definitely stuck so leveling up can definitely hurt to an extent. At least you’ve also got the Beans to collect which amp up your stars permanently. Also, there are some extra variables to consider because when leveling up you are given the option of advancing one stat in particular by a few points. Depending on what you focus it on will be key. Even the equipment have a lot of variables since you can choose to wear items that boost attack, defense, or something else.

I do like the fact that there is so much to think about. The gameplay is also very smooth for travelling the worlds. I had fun running around and trying to locate all of the beans and Pillows. I nearly completed the game 100% as I was close to grabbing them all but it wasn’t to be. The various warp pipes around definitely help for convenience and I also like that you can save at any point now. That’s a big positive. The game also has some bonus activities which were pretty fun like the puzzle assemblies. It’s been a while since I had to try and connect puzzles together so that was definitely a blast.

The soundtrack is also dynamite. There are a lot of great tunes here. Danger themes, villain themes, and the whole thing feels like an RPG. The boss themes go all in and you can easily forget that this is a Mario soundtrack early on. It would fit right in with something like Kingdom Hearts or Final Fantasy. Additionally the graphics certainly look very good. You can definitely tell that this is a modern adventure with all the trimmings. It’s a fitting way to continue the series.

Naturally the story will take you a long while. It took me close to 40 hours and if you intend to grab the rest of the beans and pillows then this will easily take you over that milestone. It’s a long game and that’s definitely pretty admirable. You will not be finishing this game in the blink of an eye so you’ve got a lot of content. As mentioned, the story is a bit weaker than the last two though so that part might make you shake your head a bit. Until the climax occurs it can just be rather boring. Bowser steals the show whenever he appears so you’ll be waiting for him to arrive. He gets a ton of hype here so the writers must clearly like the character a lot.

Overall, Dream Team takes a major step back in terms of story but the rest of the game’s areas are all handled quite strongly so this one is still a great title that I would recommend. While Antasma gets consistently outshined by Bowser, I would still say that he is a pretty solid game. His best appearance was probably in a dream near the beginning of the game. I was glad Peach also got to contribute in the climax. She’s done well in this series. I’ve already talked about how Luigi and Bowser look really good here and Mario’s a solid lead as always. If you want to see the Mario gang fighting it out in a pretty serious context then this is definitely the title to check out. You won’t be forgetting the ultimate dream team. I’m hoping Paper Jam can keep up the great gameplay even if the story ends up faltering as well.