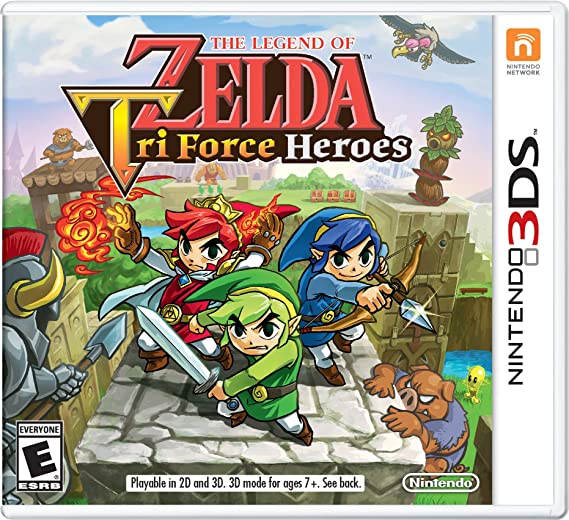 Tri Force Heroes is definitely an interesting Legend of Zelda title. It’s far different from most of the ones that come out. I would say it’s closest to Four Swords in terms of gameplay. You’ve got the classic overhead view back but this time you’re controlling 3 Links. It is held back to an extent though in how much this is built for multiple people to play it as opposed to a 1 player experience. It also ramps up the difficulty levels quite a bit to the point where this is one of the few games that took me longer to complete than the average time from the Howlongtobeat site.

The story this time revolves around a princess who is so beautiful that she ends up being cursed by another person who is jealous. She is now forced to wear a skintight suit at all times so she can no longer put on the fancy dresses she once had. A kid is instructed to destroy the monsters in 8 key worlds and break the curse on the Princess. He dons the name of Link as well as the classic gear and gets ready to accomplish this. Can Link really save the day or is he ultimately doomed to be crushed here?

Interestingly both Zelda and Ganondorf don’t appear in this game. I’m surprised they didn’t just make Zelda the princess but that’s probably for the best because I can’t really picture her just taking the curse sitting down like this. It was a good move not to make her the damsel but it would have been fun to maybe see Zelda appear as a supporting character. I was also waiting for the big twist that Ganondorf was the big villain all along but that one didn’t actually end up panning out. The actual villain who doesn’t even have a true name beyond “The Lady” is decent at best. She is a little on the petty side since the whole reason she did this is because she’s jealous of the princess. It’s not exactly the best motive.

Her role is also small but that’s the way the story is in general. You can go through the game without seeing much of the story at all. See, there are 8 worlds to complete and each world has 4 levels. Each level has 4 sections in it. You can clear all of these in one shot or break them up as much as you want. if you turn the game off after any world or leave the room then you’ll get a quick cutscene of encouragement from the King or some information from the wardrobe owner. However, if you just beat the game right up front then you won’t get these cutscenes and instead will get a lot of them back to back at the end. That’s what happened to me and it’s an odd tactic.

I feel like the plot was thrown together more as a formality but the game didn’t actually care about it all that much. As for the gameplay, it’s fairly basic. You have to get to the end of each area by solving a puzzle or defeating an enemy. You can move and swing your sword as well as using a power up specific to the level. You will need to use multiple Links to clear these levels as well like throwing Links onto higher levels or holding them up so they can slice away at enemies who are too tall to be hit normally. That’s the way to clear a lot of the puzzles since the multi links is a big part of the game’s theme.

Here’s the thing though, if you’re playing multiplayer then everyone controls a Link. In one player mode the other two are Totems so they can’t move or do anything. You have to constantly switch between them to solve the puzzles on your own which takes a lot of extra time. Additionally for bosses where you have to distract them with one Link and attack with another, it can be tough to switch that quickly. So the game is absolutely meant for multiplayer. If the other Links would move on their own as A.I. or something I think that would be a lot better. That could potentially work. Like this it can get a bit rough although the challenge was fun.

The game flies by pretty quickly. It took me a little over 8 hours to conquer it so around 1 hour a world. Part of that is just because the levels can be tricky though as they are usually pretty short otherwise. It’s worth mentioning that the game allows you to skip levels as well by using the fairy. Each level has 4 areas as I mentioned and you get 3 skips for each level. So what you can do is clear area 1 and then skip the rest of the level. If you do this then you only have to clear 32 areas in the game or effectively just 8 levels. It’s definitely an effective way to speedblitz the game but at that point are you really getting the full experience? It seems like it wouldn’t be all that worth it but at the same time if you have a level that’s particularly annoying at least you have it as an option I guess.

The graphics are pretty decent. It’s going for a pretty retro look here but everything does appear to be in HD with a lot of detail. The art style is charming and definitely gets you into the flow of the game. The soundtrack is a little more forgettable but I wouldn’t say it’s bad. It may not have the iconic theme you would expect to walk away with but it does have that classic LoZ charm to be sure. The boss theme would probably be the most memorable one if I had to choose one theme to walk away with.

As for replay value, there is definitely more to do here. For starters you can go back to the levels you completed and clear the Challenger Mode. Each level essentially has another version to play so that could last you another 8 hours. You can also try to obtain all of the clothes from the shop. I didn’t explore the hub world much at all but there is also an items shop which I could see being pretty handy. All in all I wouldn’t call it a ton of replay value but the content is absolutely there. The going price nowadays is also very low so that helps make this a bargain as well.

Overall, Tri Force Heroes is a good game. It can be a bit repetitive due to the puzzle style it has. You will be doing the same actions over and over a lot of the time which can get a bit dull so you don’t want to play this in super large batches. The fact that the game is really built around being a multiplayer experience also makes things feel a little clunky at times. Still, at the end of the day I would recommend this game if you like LoZ. It’s not quite up to the standard of the main games but as a spinoff it does accomplish its duty of being a game you can rally behind and to see the classic characters one last time.