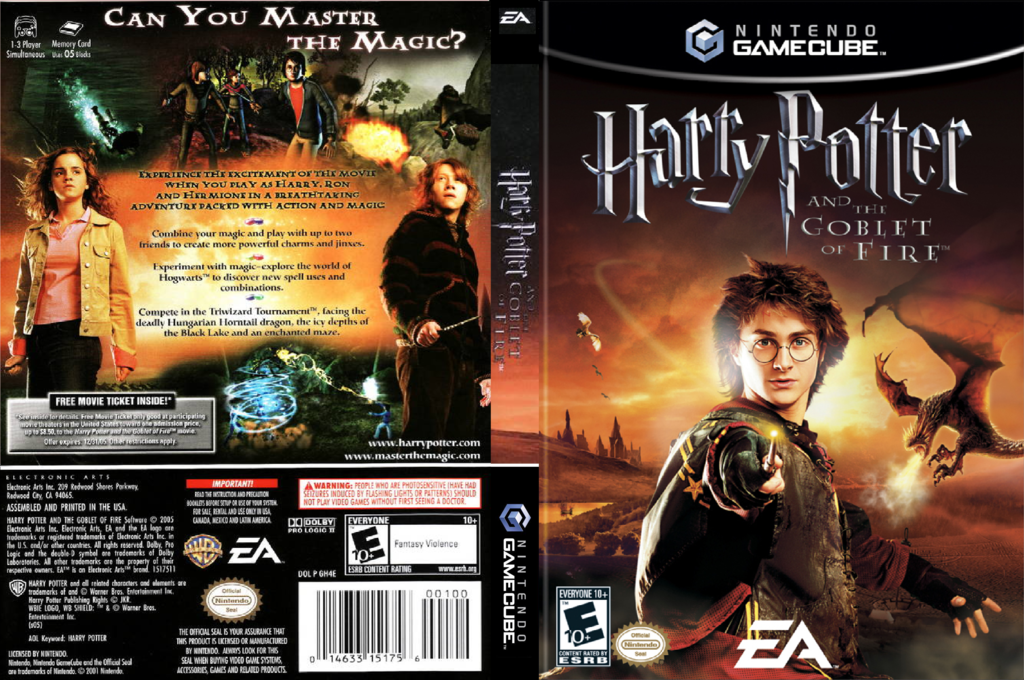 So far the Harry Potter games had actually been pretty decent. Unfortunately this one definitely broke the trend. This was just a bad game to be honest. The worst decision the developers made was to make this a forced collectathon game where you have to go back to the same levels over and over to collect more shields. Not only is the gameplay not all that much fun but the story is also the weakest in the franchise. When you mix that all together you definitely don’t have a winning formula at the ready.

You would have absolutely no idea what the story is if you just go through the game though. All you have for the plot here are some disjointed story cutscenes and that’s it. Roughly you’re finding an egg, completing 3 challenges and then taking on Voldemort. It’s too bad because otherwise you could have built up to the big battle gradually. It’s just hard to believe that the game has fallen so far compared to the previous ones. Still, at this point you get that I preferred the originals so I won’t compare them much going forward. Lets just talk about the Goblet of Fire on its own.

The gameplay is 3D style as you go through the levels and have to obtain Shields. A Shield is either hidden behind some obstacles or awarded after defeating a boss. Each level has a certain amount of shields but the game doesn’t tell you how many, nor does the level itself give you an indication of how many are left. There are 10 mini shields in each level as well and once you grab all 10 then you will be able to get another full sized shield. Another thing worth mentioning here is that you won’t be able to get all of the shields initially since you don’t learn the tree spell until later. So get ready to have to revisit the levels again.

There’s only around 10 levels but there are 38 shields so you have to replay each level quite a few times. I completed the game with 29 shields so you don’t need all of them but the game does make sure you at least have most of them. You have two main attack spells to deal with the enemies that show up. Pressing the A button will launch your offensive spell which works on just about everyone. Then you have your levitation spell with the B Button that you can use to raise your opponents while your teammates blast them or you can move obstacles out of the way in the game.

I haven’t mentioned yet but this game is a team styled game much like Sonic Heroes. There are always 3 of you running around in the game and the other two are controlled by A.I. if you are playing solo. They aren’t the brightest A.I. though and often times they will get stuck so you have to find them or just run far enough and they’ll magically catch up. A lot of obstacles require at least two people to levitate so you have to hope that they get the picture pretty quick.

While I wouldn’t say the gameplay itself is very bad, the computers do drain on you after a while. Additionally some of the level designs aren’t great so it feels tedious going through the same rooms over and over again. A lot of the enemy spawns never actually end so your best bet is to find an opening to run forward but often times this just means you are going to have to eat a whole lot of hits before you can actually get to safety which isn’t exactly fun. The bosses don’t give you much direction either but I won’t say much against them because part of me was impressed that there were bosses and you can still figure it out before long since there aren’t a lot of controls.

Get ready to hear the characters talking a lot though. While not as constant as in How to Train Your Dragon 2, they do repeat the same lines over and over again as the game goes on which can get old pretty quickly. You wish they would have a little more restraint with that. The graphics are okay although the cutscenes aren’t as sharp as the older games. The soundtrack is surprisingly good so that’s one positive I can give the game. It has a Star Wars vibe and at least puts some real soul into the tunes. It definitely beats the alternative of having a more robotic feel or uninspiring music. This way you can at least listen to good tunes.

There isn’t much replay value to be found here but I suppose finding all of the shields will have to do. You can also try to unlock extra cards by finding other collectibles and mastering your spells. I ended up getting most of the cards naturally so I don’t think this will take you very long at all. The toughest part about 100% completing this game is probably going to be getting the shields on the challenge levels. Those levels definitely don’t allow for many mistakes so you will really have to master the style.

Overall, It’s not often that I give a game a score under a 5 because most games are enjoyable in their own way. It takes a lot to be what I consider a “bad’ game but this one would fit the bill. The gameplay just isn’t fun. The levels lose any enjoyment they might have had when you have to play them over and over again. The obstacles don’t save either so you have to keep on performing the same actions each time you enter the level. There was no effort put into the story so the whole experience just isn’t satisfying. The biggest flaw of the game was the collectathon angle but without it, you would have just had a super short game that wasn’t memorable. It would have been preferable to this, but either way this wasn’t close to being a great game. I’m hoping that the next Harry Potter game steps its game up.