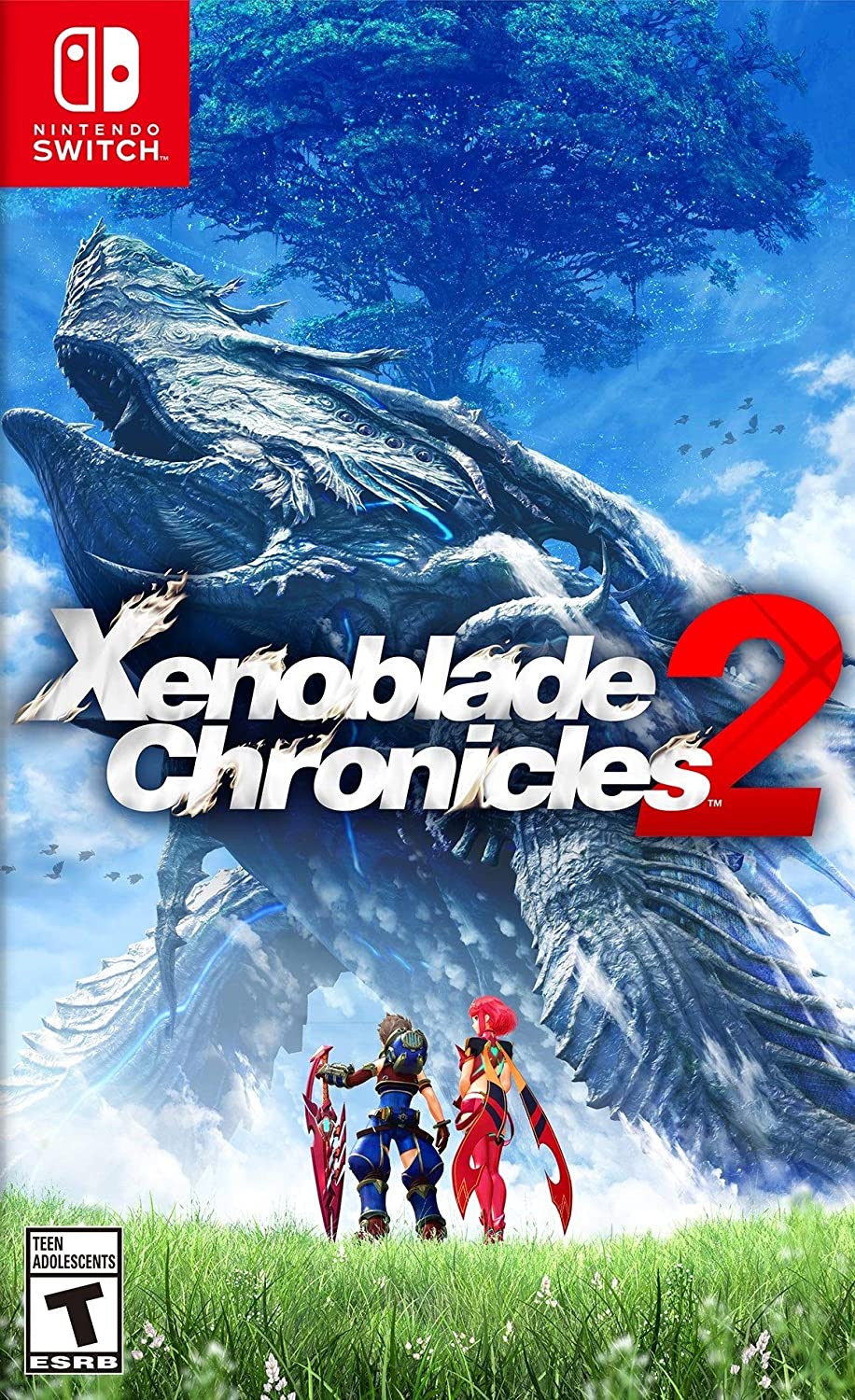 After all of these years I have finally gotten to experience the hype of Xenoblade Chronicles 2! It’s one of those games that I’ve had an eye on for a while but never really got around to playing. I was certainly missing out as this game did the unthinkable. It beat out Final Fantasy XIII and Kingdom Hearts II as my favorite RPG of all time. This game is now the king of its genre which is absolutely not something I was expecting going in. The game just delivers with so much content and fun all the way through.

The game starts out by introducing us to the world which is not in a good spot. Everyone lives in the clouds and the only “land” around are giant monsters. People live on them as continents but as you can imagine the space is very limited so the world has a population issue. Rex is a scavenger who goes around trying to salvage some spare parts to make money. One day he is recruited to help a group called Torna out in a rather dangerous expedition. Rex agrees to help out but the group double crosses him and murders the poor guy when they come into contact with the Aegis.

So in this world everyone uses a humanoid weapon to fight. The Aegis is the ultimate weapon and so they seem to want her for nefarious ends. Fortunately Rex was quickly able to make a contract with her so their lives are now linked. The Aegis’ name is Pyra and she asks Rex to take her to Elysium. He is happy about this as well because with a new land, perhaps he can help the world find some new space to live. The two will meet many companions and have to fight against a ton of enemies to get up there but neither one plans on giving up.

The game’s story took me almost 60 hours to complete so you can bet that there are a lot of other things going on here. The story is always changing dynamically and does a good job of really getting you invested. There are several factions so even the various villain groups are always trying to get in each other’s way. One of the elements that really got me on board was how likable all of the characters are. We have a bunch of really fun villains running around and of course the heroes are solid too.

Then the game spared no expense in having a bunch of fights during the cutscenes. I always like to see the characters going at it even outside of gameplay and this title delivers there. The battles are always very intense like when we fought Morag and then fighting against Jin later. The guy being able to go past the speed of light was an incredible moment because it showed how the heroes were badly out of their league. Every time they would get stronger, so would the villains. There was always a ton of suspense at every moment.

The soundtrack was also absolutely top tier. There are so many great themes throughout the game. You have solid battle themes, emotional themes, and victorious themes. These really went in during those battle cutscenes as well. It goes without saying that the graphics here are also really good. It definitely feels like a modern game through and through. You’d never mistake the graphics for anything older than current gen. No chance of that.

The game is already long as I mentioned and there is a ton of post game content to go through. You’ve got the friendship events, side missions, leveling up further, etc. There’s also a whole paid DLC story but I don’t count that directly as replay value since it’s not actually on the disc. If it was then that would be a different matter. So if the game takes you 60 hours then you’ll have spent 1 dollar per hour which is a really good deal. How can you go wrong there right?

Rex had big shoes to fill in since Shulk was the main character of the first game but I would say he did a great job in this role. Rex has a lot of confidence and ends up being a character who will really inspire you the whole time. He never gives up on his dreams and fights hard. He does lose confidence at one point but for the most part he is always ready to get in on the action. Then you have Pyra who is a fun heroine and of course she can fight really well as the Argis. The two of them have a fun dynamic as friends.

Then there’s Mythra who is the more confident version of Pyra who has unimaginable power. When she appears this is a really big tipping point in the game. I had a lot of fun playing with her in the party but the game does give her a big limitation which is that you can’t use her final smash while you’re indoors. A lot of bosses are indoors so that does hurt a bit.

One of our main companions is Nia who was a member of Torna but fortunately joined up with us. She’s always a fun character and liked to mess with Rex and Pyra. There is a twist regarding her character which does hurt quite a bit near the end of the game but all in all she is definitely someone you can trust to have your back. Zeke started out as someone who didn’t seem all that impressive but by the end he looks rather good. It was also good to have him on the squad although by the time he joined up the villains were so powerful that he didn’t seem to get a lot of wins.

Morag has one of the best entrances in the whole game. She appears as the most powerful driver in the land and gives the heroes their first real big battle. It was also a solid moment where Rex chose to trust Pyra instead of delving into her past. Morag would go on to become a very reliable ally for the heroes throughout the adventure. Then we have Poppy who is a fun android. The fact that she is an artificial blade comes in handy on more than one occasion.

There are quite a number of villains in Torna. Some of the members don’t even appear until you’re deep into the game but once they show up, they make their presence known. The two most impressive villains would be Jin and Malos. Both of them have detailed backstories to explain what is going on here. For Jin, he’s extremely fast and determined which makes for a solid villain. He’s also got an honor code so you couldn’t ask for a much more impressive guy. He steals the show for the villains. Malos is also solid though, I like his confidence and he makes things tough on the heroes many times over as the game goes on.

Of course there are many more characters and events going on but you’ll want to play the game for yourself to see how that plays out. Now, what is the gameplay like? Well, that’s the only part of the game that I wasn’t all that impressed with. It’s sort of a turn based RPG, but one that operates in closer to real time and is part auto battle. So you try to stay close to the villain and your character will start automatically attacking. You can then choose special attacks and combos but a large part of the game is pretty much 100% automated.

I’m more used to seeing that on the mobile and not in a console experience so it took me for a bit of a loop. There is still a lot of strategy to it and I want to underscore that the game can still be quite challenging. That said, it just wasn’t my ideal gameplay style. I’d have preferred to have gone with traditional turn based or more of a fully real time style like Kingdom Hearts. If the game had gone in either of those routes then I think it would have ended up being quite a lot better for it.

Seeing as how this is the gameplay we’ve got though, then the next step is that you need to master it as soon as possible or the final bosses will really take you down a few pegs. I delayed learning about the orb system until the final chapters but then I had to use it. It’s difficult to describe so pay a lot of attention during the tutorials in the game. Effectively, you have to launch a combo of a level 1, level 2, and then level 3 special in the correct order to plant an orb on an opponent. Then when your team combo gauge is maxed out, you can use a unity attack. If you break an orb then you get to attack again and this goes on for up to 3 orbs. You can have more but they don’t seem to trigger extra attacks.

One big tip I’d give here is to constantly have your blades out on scouting assignments. It’s a great way to always be building up some funds and extra XP. You’ll need every bit of that in order to beat the final bosses who really jump up in terms of difficulty level. You won’t be breezing through them the way that you would have done so against the earlier villains. When the game’s difficulty jumps up, it is always very sudden as opposed to being gradual. So one minute you’ll be dominating and in the next you will be getting wrecked.

Overall, Xenoblade Chronicles 2 is a game that will take a while to beat. You really have to fully understand the gameplay style and how to make the best out of every character. You will be engaged with the story right from the jump though. It’s just extremely solid from start to finish and the ending was also the perfect way to end things. With Xenoblade Chronicles 3 on the rise, I can now say that I’m ready for what comes next. I don’t see how it can beat 2 though. If you haven’t played this game yet, I would say that you should change that as soon as possible!